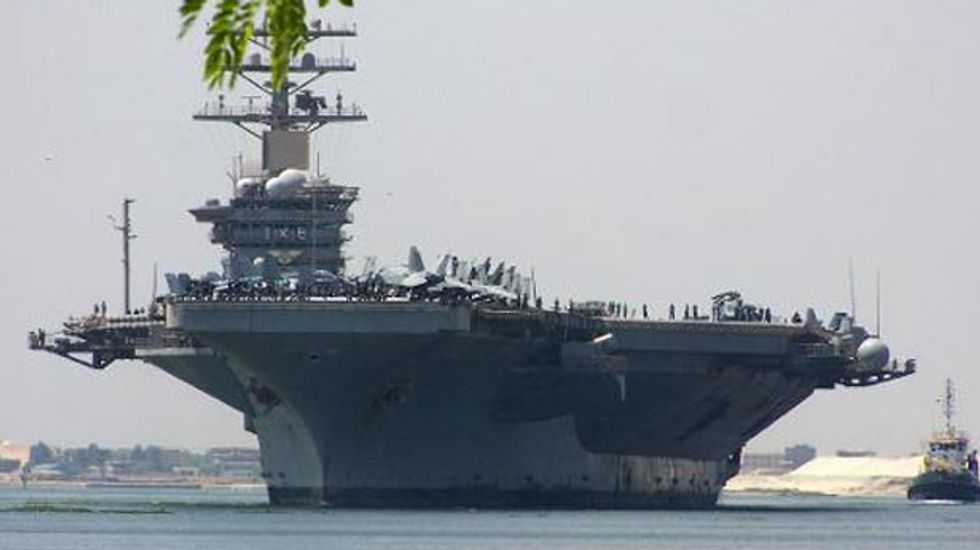 Iran is building a crude mock-up of an American aircraft carrier at a ship yard on its Gulf coast and US officials said Friday the goal of the project remains a mystery.

Iran has made no attempt to hide its "curious" construction effort near Bandar Abbas on the Gulf, as commercial satellite imagery has shown a vessel gradually taking shape, resembling the outlines of a Nimitz-class carrier, three administration officials said.

"They got this barge and threw some wood on top of it to make it look like the USS Nimitz. That's all we know for sure," a defense official, who spoke on condition of anonymity, told AFP.

"We think they're going to try to get some propaganda value out of it," he said. "We find it very curious...We don't know what Iran hopes to gain by building it."

Defense officials stressed that the vessel was not a working aircraft carrier, had no nuclear propulsion system and was essentially a barge outfitted to look -- but not operate -- like a carrier.

Officials said the Iranians have previously used barges in military exercises and later broadcast television footage of the vessels being blown up with missiles.

The project was first reported by the New York Times, which quoted officials speculating the Iranians may blow up the fake carrier for television cameras as a propaganda exercise.

"It is not surprising that Iranian naval forces might use a variety of tactics -- including military deception tactics -- to communicate and possibly demonstrate their resolve in the region," said a third US official, who asked not to be named.

Commercial satellite photos show a ship under construction in Gachin shipyard on the Gulf and more recent images reveal a vessel with the unmistakable design of a Nimitz-class carrier, along with fake aircraft parked on the deck.

The puzzling project came to light at a moment of lowered tensions with Iran and intense diplomacy, as Washington and major powers try to broker an agreement with Tehran over its disputed nuclear program.

Over the past year, Iran has stepped back from assertive maneuvers in the Gulf, officials said, as previously Iranian speed boats had sometimes swarmed around US warships passing through the Strait of Hormuz.