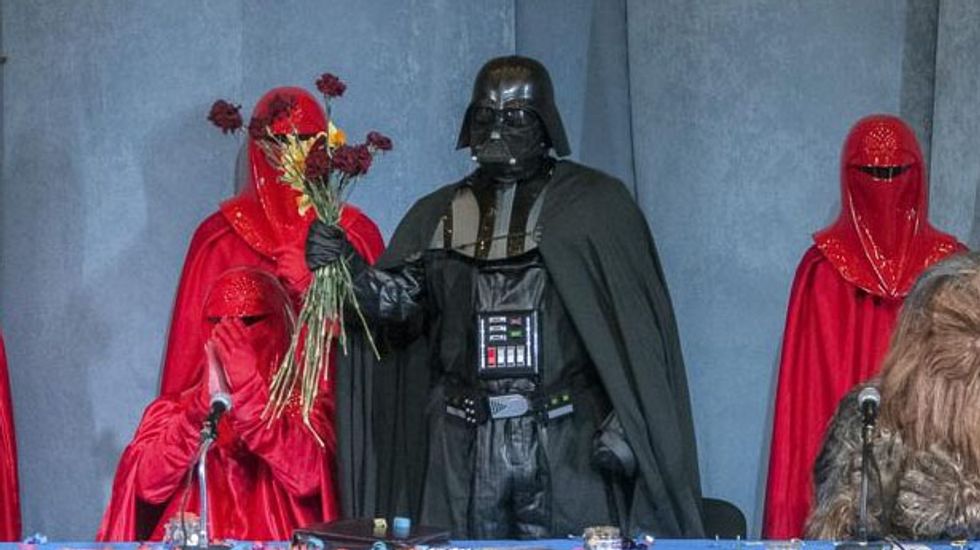 As Ukraine battles to stave off dark forces of its own, iconic movie villain Darth Vader announced he was running for president in a bid to restore all glory to the downtrodden nation.

The Sith Lord, or at least an unnamed protester dressed up as him who has often been seen on Kiev's Independence Square during the winter protests flanked by his loyal Stormtroopers, has been chosen as the official candidate of the Ukrainian Internet Party (UIP) which has become known for its theatrical public stunts.

"After winning intra-party primaries by a landslide, comrade Vader will be our party's candidate," said UIP leader Dmitry Golubov, who spent time in prison after being convicted of using the internet to run a credit card fraud scheme.

Encased in black armour, with a black mask and cape, the party's "Darth Vader" has been involved in several political actions in the country.

In November 2013 he was carried by his Stormtroopers -- the elite soldiers of the fictional galactic empire -- to Odessa city hall where he declared himself mayor.

According to local media reports he has also reportedly demanded a plot of land in the southwestern city to park his space ship.

"I alone can make an empire out of a republic, to restore former glory, to return lost territories and pride for this country," Vader said in a party statement.

Ukraine is holding a snap presidential election on May 25 after parliament ousted pro-Moscow leader Viktor Yanukovych as a result of bloody street protests against his government.

The move prompted the Kremlin to back a referendum in the majority Russian-speaking Black Sea peninsula of Crimea which voted to split from Ukraine.

The UIP was registered in 2010 and aims to create an electronic government in Ukraine, transition to digital media and offer free computer courses to all citizens, amongst other things.

According to the party, Darth Vader scored three percent of the votes in 2012 parliamentary elections, which did not count because Ukrainian law does not recognise write-in candidates.