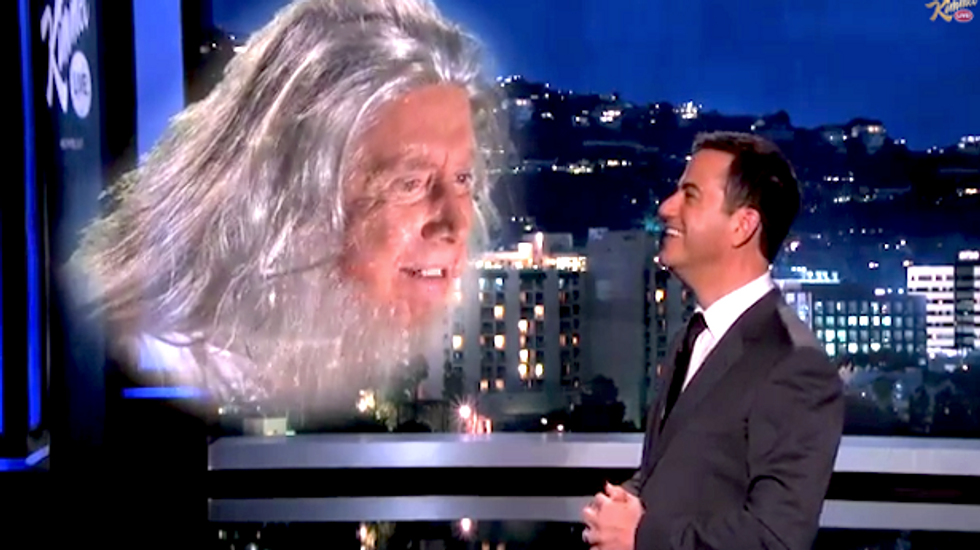 The talk show host interviewed “God,” portrayed by Regis Philbin, about the recent discovery of evidence to support that theory of the universe’s origins.

Kimmel asked the divine author how he was taking the news.

“Am I OK? You saw the news!” Philbin said, wearing a white beard, wig, and robe. “The universe was created by the Big Bang! Come on! Apparently, when it comes to matter, I don’t matter anymore.”

The comedian assured the Lord that He still mattered, and suggested that He might have caused the Big Bang to happen.

“Yeah, right,” Philbin said, dejected. “That sounds convenient. I don’t know, maybe I did. Honestly, I can’t even remember. All I remember is that I separated the land from the oceans, I breathed life into dust, and then I let you guys beat the Soviets in hockey that one time. What else can I do? I don’t know, I give up.”

Kimmel urged the Almighty to stop being so hard on Himself.

“Who did Matthew McConaughey thank in his Oscar acceptance speech?” Kimmel said.

“Whose name do women cry out in the heat of passion?” Kimmel said.

“Well, most of the time it’s me,” Philbin said.

“Who does Kanye West think he is?” Kimmel said.

“That’s right. So forget about the stupid Big Bang theory, you’re God,” Kimmel said. “You’re the man! There’s nobody above you; you’re No. 1!”

Philbin thanked Kimmel for his pep talk, and the comedian asked for a favor.

“Have you given any more thought to that thing I’ve been praying for since I was a teenager?” Kimmel said.