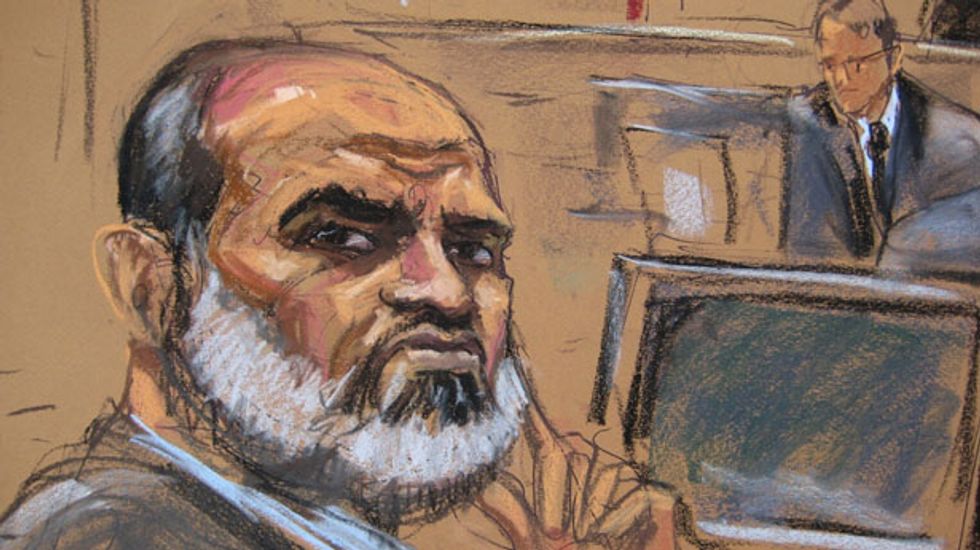 NEW YORK (Reuters) - Suleiman Abu Ghaith, a son-in-law of Osama bin Laden, was found guilty of terrorism-related charges on Wednesday following a three-week trial that offered an unusually intimate portrait of al Qaeda's former leader in the days after the September 11, 2001 attacks.

Abu Ghaith, 48, a Kuwait-born teacher, faces life in prison after a federal court jury in New York convicted him of conspiring to kill Americans, conspiring to provide material support for terrorists, and providing such support.

Jurors took just over one day to reach a verdict.

Prosecutors had accused Abu Ghaith, one of the highest-profile bin Laden advisers to face trial in a U.S. civilian court since 2001, of acting as an al Qaeda mouthpiece, using videotapes of his inflammatory rhetoric to recruit new fighters.

They also said Abu Ghaith knew in advance of an attempt to detonate a shoe bomb aboard an airplane by Briton Richard Reid in December 2001, citing in part an October 2001 video in which he warned Americans that the "storm of airplanes will not stop."

Lawyers for Abu Ghaith said the prosecution was based on "ugly words and bad associations," rather than actual evidence that the defendant knew of or joined plots against Americans.

In a surprising move, Abu Ghaith took the witness stand in his own defense, denying he helped plot al Qaeda attacks and claiming he never became a formal member of the group.

Abu Ghaith also described meeting with bin Laden in Afghanistan hours after the September 11 hijacked plane attacks, which killed nearly 3,000 people and destroyed the World Trade Center, only a few blocks from the courthouse where the trial took place.

"We are the ones who did this," bin Laden told Abu Ghaith, who had learned of the attacks via news reports, according to the defendant's testimony.

Bin Laden, a founder of al Qaeda, was killed by U.S. forces in May 2011 at this hideout in Pakistan.

As in several other terrorism trials held in U.S. civilian courts, the jury remained anonymous.