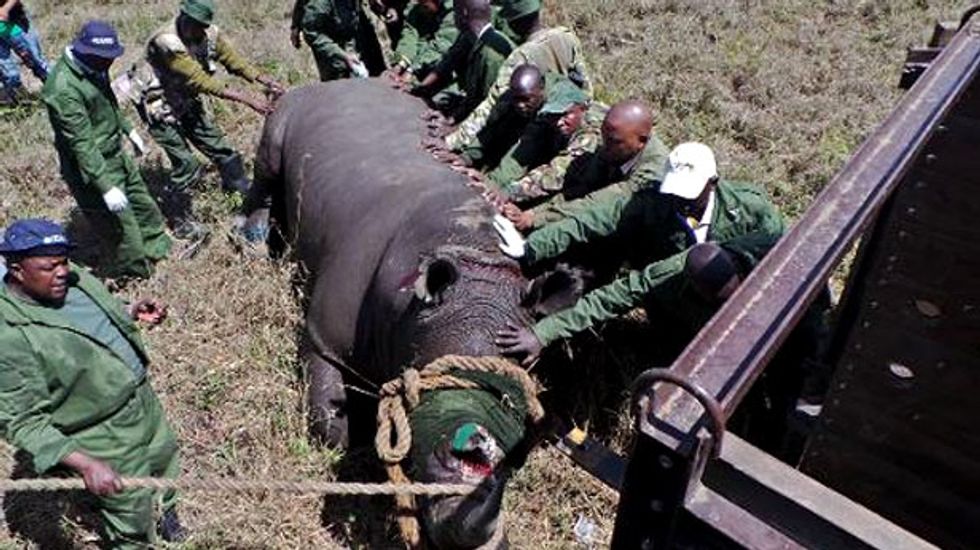 The poachers have "an extraordinary level of international criminal backing... operating with outrageous impunity, killing our elephants and rhinos at levels that will make them extinct within the country," Leakey told reporters.

"It's a national disaster, and we have to stand up and say that it cannot go on."

Kenya, acting as a conduit for smuggling across East Africa, is "now the worst in the world for ivory trafficking," Leakey said, quoting an Interpol report which said 13 tonnes were seized last year.

The rise in poaching -- with rhinos being killed even inside the most heavily guarded zones -- show that poachers have little fear of tough new laws designed to stem the wave of killings, he said.

"They could not operate with the impunity we are seeing if you did not have some form of protection from law enforcement agencies," Leakey said.

"It is a problem of a few criminals... the ringleaders are known," he added, claiming that a core group of around 20 to 30 people were organising the mass poaching but that none had faced justice.

A recent study by the Kenyan conservation campaign group Wildlife Direct found that just four percent of those convicted of wildlife crime spent time in jail.

While declining to name names, Leakey said it was "unthinkable" security forces "do not know the names of the key players".

Leakey, 69, a Kenyan national and former head of the government's Kenya Wildlife Service (KWS), was key in stemming the rampant poaching of the late 1980s, bringing in extreme measures to combat poachers including sending helicopter gunships into national parks.

Kenya's elephant and rhino populations recovered from the brink of disaster, but more than two decades later the east African nation is once again facing soaring levels of poaching.

Leakey warned of a "very similar situation" to the mass poaching of the 1980s, and said the KWS force needed a complete overhaul and new management.

"We cannot afford to lose what is left," he said. "The only way to stop it is to appeal to President Uhuru Kenyatta to be bold, to take action."

The situation in Kenya is mirrored elsewhere in Africa.

Armed poachers slaughtered double the number of Kenyan rhinos in 2013 compared to the year before, according to government figures.

At least 59 rhinos were killed for their horns last year, compared to 30 in 2012, while 16 rhinos have been killed already this year.

But Leakey said the number of animals killed was far higher than official statistics suggested, saying that reports that the number of elephants being killed had declined were "patently not true".

According to official statistics, elephant killings dropped by around a fifth, from 384 killed in 2012 to 302 last year.

Leakey pointed to an elephant census in the vast Tsavo national park last month, which discovered 800 carcasses, and found the number of animals had slumped by 1,500 in the past four years alone.

Ivory is sought out for jewellery and decorative objects, and Leakey picked up a piece of carved tusk from a baby elephant seized from a smuggler.

"It's worthless, it's nonsense," Leakey said, waving the tiny tusk. "What can you do with this?"

But KWS spokesman Paul Udoto said the rangers were being killed by gunmen as they did all they could to stop poaching.

"If there is a crooked character then go and get him," he said, denying that official statistics were false.

"We are doing our best in very tough conditions."