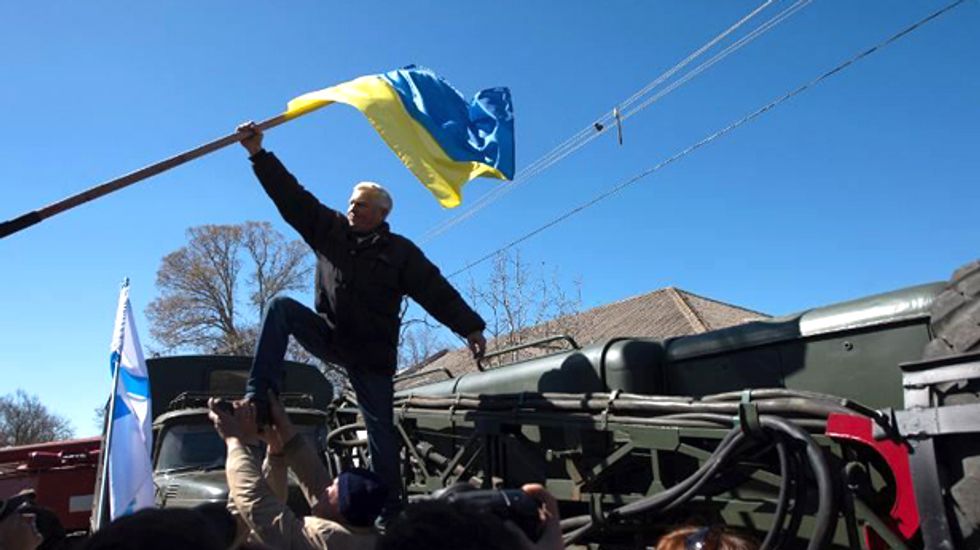 Armoured vehicles backed by troops pointing guns at unarmed soldiers stormed a Ukrainian airbase in Crimea on Saturday as Russia's defiant march across the rebel peninsula rolled on despite sanctions and growing global isolation.

The show of Russia's unbridled might came as the chill in East-West relations intensified with a charge by Germany -- a nation whose friendship Russian President Vladimir Putin had nurtured -- of a Kremlin attempt to "splinter" Europe along Cold War-era lines.

Europe's most explosive security crisis in decades will now dominate a nuclear security summit that kicks off in The Hague on Monday and will include what may prove the most difficult meeting to date between US Secretary of State John Kerry and Russian Foreign Minister Sergei Lavrov.

The diplomats' encounter will come with Russia facing the loss of its coveted seat among the G8 group of leading nations and Putin's inner circle reeling from biting sanctions Washington unleashed for their use of force in response to last month's fall of a pro-Kremlin regime in Kiev.

Crimea's rebel authorities estimate they together with Russian forces control at least half of Ukraine's bases on the Black Sea peninsula and about a third of its functioning naval vessels.

Russian troops on Friday marked Putin putting his name on a treaty sealing the Kremlin's absorption of the mostly Russian-speaking region by storming and seizing Ukraine's only submarine in the region.

The hulking Zaporozhye vessel flew the St Andrew's flag of Kremlin navies on Saturday as it was moved to a bay controlled by the Russian Black Sea Fleet.

The most tension-fraught episode on Saturday saw gunmen dressed in fatigues similar to those worn by crack Russian forces break into the Belbek airbase near the main city of Simferopol after an armoured personnel carrier blasted through the main gate.

Two more armoured personnel carriers followed and militias stormed in firing automatic weapons into the air and pointing guns at Ukrainian soldiers who had earlier received an ultimatum to surrender from the surrounding Russian troops.

An AFP reporter heard stun grenades on the territory of the base before the situation calmed and the gunmen lowered their weapons. Several of the base's unarmed soldiers began singing the Ukrainian national anthem during the ensuing lull.

Ukraine's local defence ministry spokesman Vladislav said in a posting on Facebook that "the base has been surrounded by (Russian) special forces."

But both the local Crimean authorities and Russian defence officials remained silent throughout the raid.

A few hundred protesters also raised the Russian flag after storming a Ukrainian airforce base in the western Crimean town Novofedorivka while pro-Kremlin forces watched.

Germany -- whose economic power is playing a decisive role in forging Europe's response to Putin's increasingly belligerent stance -- warned after talks with Ukraine's besieged interim leaders that the continent's future was at stake.

"The referendum in Crimea... is a violation of international law and an attempt to splinter Europe," Foreign Minister Frank-Walter Steinmeier told reporters after meeting Ukrainian Prime Minister Arseniy Yatsenyuk.

Canadian Prime Minister Stephen Harper brought his own message of support for "courageous" Ukrainians on a first visit by a G7 leader since Crimea staged a contentious March 16 independence vote that the international community almost unanimously proclaimed illegal.

Harper said Putin had "undermined international confidence" by violating a 1994 deal under which Ukraine gave up its Soviet-era nuclear weapons in return for sovereignty guarantees from Russia and several Western states.

"By breaching that guarantee, President Putin has provided a rationale for those elsewhere... to arm themselves to the teeth," said Harper.

The show of diplomatic solidarity may play an important psychological role in Kiev as it faces new rounds of pressure by Russia that include open threats to throw Ukraine's wheezing economy into convulsion by raising its gas rates and demanding colossal payments for disputed debts it could ill afford.

The biggest such signal from Europe came on Friday with the signing in Brussels of the very agreement on closer EU-Ukraine relations whose rejection by the Moscow-backed regime sparked three months of deadly protests that led to its February 22 fall.

But Ukraine is unlikely to hear its calls for US and EU military support answered.

Yatsenyuk said he had discussed "military and technological cooperation assistance" with Steinmeier, but reported no further progress.

Both the United States and Europe have thus far limited their retaliation against Putin to targeted travel and financial sanctions that concern officials but do not impact the broader Russian economy.

Washington's steps have been more meaningful because they hit what US officials call a Putin "crony bank" as well as oligarchs who are believed to be closest to the Russian strongman and -- in one case -- actually running a joint business with him.

Moscow appears to have been taken aback by the force of US President Barack Obama's message -- as well as the threat to one day hit Russian industries. Its only response to date has been to bar nine US officials and lawmakers from entering the country.

Putin on Friday made light of the US decision to target a bank suspected of being close to him and suggested in televised comments that "we should for now hold off on reciprocal steps."

He made no mention of the Europeans, whose punitive steps are so far mostly limited to the largely symbolic suspension of free travel talks and a summit Putin had been due to host in June.

Leading EU nations such as Britain and Germany -- their financial and energy sectors intertwined with Russia's -- have questioned why they should suffer most in case of an all-out trade war.