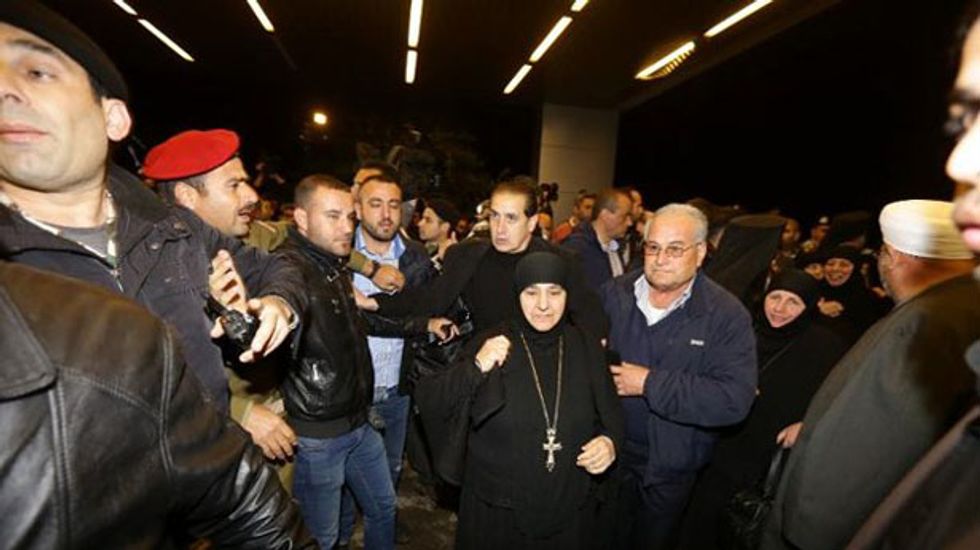 A group of nuns kidnapped by rebels in the Syrian town of Maalula in December were released early Monday thanks to Lebanese-Qatari mediation and handed to the Syrian authorities.

A monitoring group said the release was secured in exchange for some 150 women prisoners who were being held in Syria's regime jails.

The 13 nuns and three maids were kidnapped from the famed Christian hamlet of Maalula and taken to the nearby Syrian rebel town of Yabrud, where they were held by Al-Qaeda affiliate Al-Nusra Front.

Their release comes amid fierce fighting around Yabrud near the Lebanese border, months into a campaign by the army -- backed by Lebanon's Hezbollah -- aimed at crushing rebel positions there.

The nuns arrived at Jdeidet Yabus after midnight on the Syrian side of the border with Lebanon, after an arduous nine-hour journey that took them from Yabrud into Lebanon, then back into Syria via the official crossing.

An AFP journalist at Jdeidet Yabus said the nuns appeared exhausted, and that one of them had to be carried out of the vehicle transporting them.

Speaking to reporters at the border, one of the nuns said: "We want to thank God, who made it possible for us to be here now. We thank President Bashar al-Assad for being in contact with the emir of Qatar (Tamim Bin Hamad al-Thani).

"We will not forget the honest mediator, Abbas Ibrahim," she added, in reference to Lebanon's General Security agency director.

Seated as she spoke, and dressed in her black religious habit, the nun said all 16 hostages were treated "well" in captivity.

Al-Nusra Front "were giving us everything we asked for", she said.

"No one bothered us," she said, denying earlier rumours their kidnappers had forced the group of Syrian and Lebanese nuns to remove their crosses.

The nuns will be officially welcomed home at an event later Monday at the Greek Orthodox Patriarchate in Damascus.

Throughout Sunday, there had been fears the operation could fail, as a source close to the negotiating team said "mistrust" on both sides was causing persistent delays.

The Syrian Observatory for Human Rights, a Britain-based monitoring group, meanwhile said some 150 women who had been held in Syria's jails were on board four buses at the Lebanese-Syrian border, after being set free in exchange for the nuns.

"A woman and her four children who had been in jail were freed first and reached Yabrud," said Observatory director Rami Abdel Rahman, describing the initial release as "a gesture of goodwill" by the Syrian authorities.

"One hundred forty-nine other women prisoners are now with Lebanon's General Security agency after being freed from Syrian jails, in accordance with the deal," he told AFP.

But a security official said he could not confirm whether the prisoners had yet been freed.

Tens of thousands of people, including hundreds of children, are being held in Syria's jails, where torture and ill-treatment are systematic, rights groups say.

Sema Nassar, a Syrian human rights activist who works on the issue of detainees, said she fears some of the released prisoners may face re-arrest in future should they return to Syria.

"In previous operations of this kind, women who have been released have only been detained again a couple of weeks later," she told AFP.

Ibrahim led efforts to secure the release of the Maalula nuns along with Qatar's intelligence chief Ghanem al-Kubeissi, who arrived in Lebanon on Saturday.

Last year, Qatar and Ibrahim played a leading role in securing the release of a group of Lebanese Shiite pilgrims held by rebels in northern Syria.

Qatar has been a key backer of Syria's revolt.

The nuns had been kidnapped on December 3 amid fighting for the ancient village of Maalula, which is currently in rebel hands.

Several other towns that had previously been under rebel control have since November fallen to the regime, including Deir Attiyeh, Nabuk and Qara.

For nearly a month, the battle has been focused around Yabrud, the biggest town in the Qalamoun mountains near Lebanon's border.

The Syrian air force has waged daily strikes on the town.

Dozens of fighters, including at least 27 Hezbollah members, have died in battles in the area in recent weeks, the Observatory says.

The Qalamoun area is strategic because of its proximity to the Lebanese border and because it lies on a key route linking Damascus to Homs in central Syria.

Thousands of residents of Yabrud, a mixed Muslim and Christian town once home to some 30,000 people, have fled because of the violence.