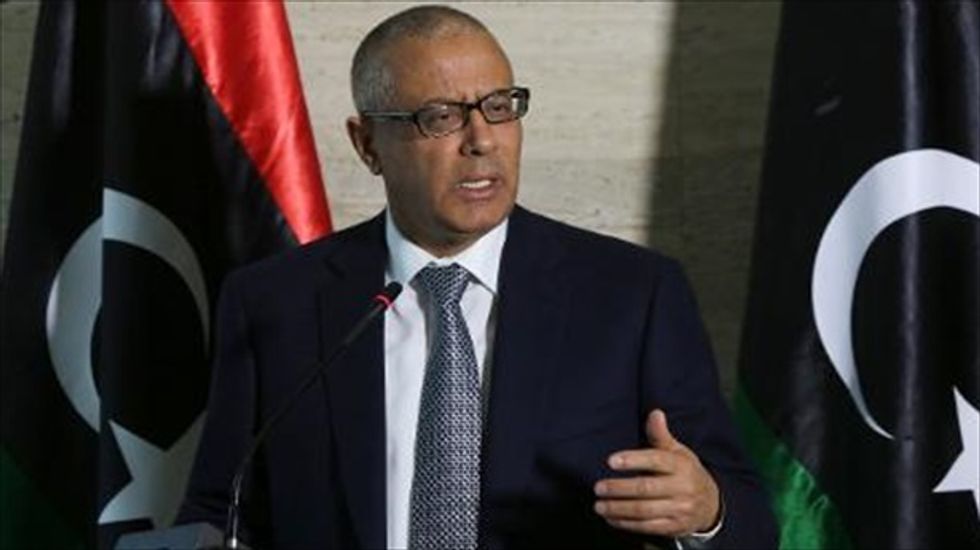 Libya's premier was ousted by parliament Tuesday after a tanker laden with crude oil from a rebel-held terminal broke through a naval blockade and escaped to sea, underscoring the weakness of the central government.

The no-confidence motion was approved by 124 of the 194 members of the General National Congress, four more than the majority required, MPs said.

Ousted prime minister Ali Zeidan was temporarily replaced by Defence Minister Abdullah al-Thani, who was sworn in as caretaker premier until a permanent replacement can be chosen within two weeks, a GNC statement said.

Zeidan, an independent who had been supported by liberals, proved incapable of bringing to heel former rebel militia that carved out their own fiefdoms after the 2011 uprising that ended Moamer Kadhafi's four-decade rule.

The beleaguered prime minister was even briefly abducted by former rebel militia in the heart of the capital last October.

Earlier Tuesday, in a final humiliation for Zeidan, a North Korean-flagged tanker that had taken on a cargo of oil from a rebel-held terminal in the east slipped passed naval vessels deployed to intercept it and escaped to sea.

The Morning Glory, which docked in Al-Sidra Saturday and is reported to have loaded at least 234,000 barrels of crude, is the first vessel to have done so from a rebel-held terminal since the challenge against the Tripoli authorities erupted last July.

Zeidan's government had threatened armed action, even an air strike, to prevent the tanker getting away with the oil bought from the rebels' self-declared autonomous government without the authorisation of state-owned Libyan National Oil Corporation.

But bad weather prevented the small naval vessels -- mostly fast patrol boats -- from following the huge ship out into the Mediterranean from Al-Sidra, MPs said.

Warships had deployed to block the Morning Glory after Culture Minister Amin al-Habib warned Sunday that the tanker would be "turned into a pile of metal" if it tried to leave port.

The government has said a task force composed of both regular troops and ex-rebel militia is being formed to bring the rebel ports back under central government control within a week.

But analysts warn that any resort to force risks plunging Libya into civil war and damaging the country's vital oil infrastructure.

The standoff between Tripoli and the eastern rebels has already slashed Libyan oil exports from 1.5 million barrels per day to just 250,000, dealing a massive blow to the North African country's key revenue earner.

The former rebels, who seized control of export terminals last July, are demanding the restoration of the autonomy that the eastern region of Cyrenaica enjoyed for the first 12 years after Libyan independence in 1951.

They insist that all oil sales they make will be transparent but that revenues from eastern exports should be kept by the region.

Washington said Sunday it was "deeply concerned" over the loading of "illicitly obtained" oil.

"This action is counter to law and amounts to theft from the Libyan people," State Department spokeswoman Jen Psaki said.

Zeidan had warned that the country faced chaos if he were ousted without a consensus on his replacement.

But MPs were angry over the government's failure to make good on its threat to stop the tanker by force if necessary.

"The situation in the country has become unacceptable. Even those MPs who used to support the prime minister no longer have any alternative," MP Suad Gannur told AFP.

Ever since Zeidan took office in November 2012, he and the GNC have blamed each other for the country's woes.

And while the GNC scored a victory of sorts on Tuesday, it is also unpopular among much of the population. In December, having failed to lay the groundwork for the adoption of a new constitution, it extended until the end of 2014 a mandate that was supposed to have ended in February.

But under popular pressure, it agreed to a new roadmap for legislative and presidential elections before a new charter is adopted.

And on Tuesday, it decided to leave the decision on whether the president would be chosen by lawmakers or universal suffrage to a new parliament, a date for whose election has still not been set.

"Dimock residents have known for 14 years that Cabot Oil & Gas is guilty of contaminating our water."

Nearly 14 years after a well explosion on New Year's Day 2009 revealed to Dimock residents that methane had percolated into their groundwater, Cabot Oil & Gas pleaded no contest to 15 criminal charges, including nine felonies. The notorious driller, now owned by Coterra Energy, was featured in the 2010 HBO documentary Gasland.

Wohl and Burkman were behind the hoax robocalls seeking to intimidate Black voters out of casting mail-in ballots in the 2020 presidential election. The automated calls came during the height of the COVID pandemic, when mail-in voting was expanded throughout the country as a protective measure.

Both men were sentenced to two years of probation and ordered to wear GPS ankle monitors with home confinement for six months beginning at 8 pm every night. Cuyahoga County Common Pleas Court Judge John Sutula also placed a $2,500 fine on each of them, comparing their actions to the widespread Black voter suppression in the 1960s.