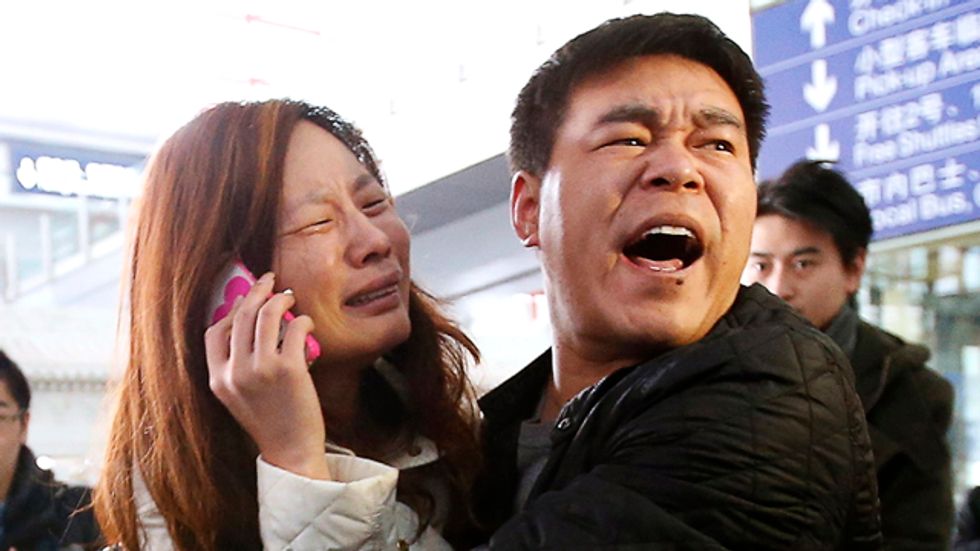 A Malaysia Airlines flight carrying 227 passengers and 12 crew went missing off the Vietnamese coast on Saturday as it flew from Kuala Lumpur to Beijing and was presumed to have crashed.

There were no reports of bad weather and no sign why the Boeing 777-200ER, powered by Rolls-Royce Trent engines, would have vanished from radar screens about an hour after take-off.

By nightfall in the region, there were no signs of the plane or any wreckage, some 17 hours after it went missing.

A large number of planes and ships from several countries were scouring the area where the plane last made contact, about halfway between Malaysia and the southern tip of Vietnam.

Vietnam on Saturday dispatched two navy boats from Phu Quoc island and sent two jets and one helicopter from Ho Chi Minh City to search for the missing airliner. It was readying a further seven planes and nine boats to join the search effort.

China, and the Philippines have also sent ships to the region to help. The United States, the Philippines, and Singapore also dispatched military planes to help in the search.

Vietnamese state media, quoting a senior naval official, had reported that the plane had crashed off south Vietnam. Malaysia's transport minister later denied any crash scene had been identified.

"We are doing everything in our power to locate the plane.

We are doing everything we can to ensure every possible angle has been addressed," Transport Minister Hishamuddin Hussein told reporters near the Kuala Lumpur International Airport.

Vietnamese Admiral Ngo Van Phat later qualified his earlier remarks about a crash site having been identified and told Reuters he was referring to a presumed location beneath the plane's flight path, using information supplied by Malaysia.

A crash, if confirmed, would likely mark the U.S.-built airliner's deadliest incident since entering service 19 years ago.

The plane, aged over 11 years, disappeared without giving a distress signal - a chilling echo of an Air France flight that crashed into the South Atlantic on June 1, 2009, killing all 228 people on board. It vanished for hours and wreckage was found only two days later.

Search and rescue vessels from the Malaysian maritime enforcement agency reached the area where the plane last made contact at about 4:30 p.m. local time (0330 ET) but saw no sign of wreckage, a Malaysian Maritime Enforcement Agency told Reuters.

The airline said people from 14 nationalities were among the 227 passengers, including at least at least 152 Chinese, 38 Malaysians, seven Indonesians, six Australians, five Indians, four French and three Americans.

"The Australian government fears the worst for those aboard missing Malaysia Airlines flight MH370," a spokeswoman for Australia's Department of Foreign Affairs and Trade said.

Flight tracking website flightaware.com showed the plane flew northeast over Malaysia after takeoff and climbed to an altitude of 35,000 feet. The flight vanished from the website's tracking records a minute later while it was still climbing.

Chinese Foreign Minister Wang Yi told reporters in Beijing that China was "extremely worried" about the fate of the plane and those on board.

Chinese relatives of passengers angrily accused the airline of keeping them in the dark, while state media criticized the carrier's poor response.

"There's no one from the company here, we can't find a single person. They've just shut us in this room and told us to wait," said one middle-aged man at a hotel near Beijing airport where the relatives were taken.

"We want someone to show their face. They haven't even given us the passenger list," he said.

Another relative, trying to evade a throng of reporters, muttered: "They're treating us worse than dogs."

In Kuala Lumpur, Malaysia Airlines told passengers' next of kin to come to the international airport with their passports to prepare to fly to the crash site, which has still not been identified.

About 20-30 families were being kept in a holding room at the airport, where they were being guarded by security officials and kept away from reporters.

Malaysia Airlines has one of the best safety records among full-service carriers in the Asia-Pacific region.

It identified the pilot of MH370 as Captain Zaharie Ahmad Shah, a 53-year-old Malaysian who joined the carrier in 1981 and has 18,365 hours of flight experience.

Chinese state media said 24 Chinese artists and family members, who were in Kuala Lumpur for an art exchange program, were aboard. The Sichuan provincial government said Zhang Jinquan, a well-known calligrapher, was on the flight.

If it is confirmed that the plane crashed, the loss would mark the second fatal accident involving a Boeing 777 in less than a year and by far the worst since the jet entered service in 1995.

Boeing said it was monitoring the situation but had no further comment. The flight was operating as a China Southern Airlines codeshare.

Iowa Democrats could move forward with presidential caucuses with or without the national party’s blessing, as it has in the past. But state party leaders are not speculating about what they might do if the DNC tries to end Iowa’s reign as the first presidential nominating contest in the nation.

The DNC Rules and Bylaws Committee is scheduled to recommend a new presidential nominating calendar during its meeting Dec. 1-3 in Washington D.C. The panel decided earlier this year to strip Iowa, New Hampshire, Nevada and South Carolina of their traditional leading positions and require them to compete with other states for the coveted spots.

Julia Conley, Common Dreams
Rights groups and other supporters of marriage equality celebrated Tuesday after 12 Senate Republicans joined with all Democrats present to pass protections for same-sex and interracial partnerships.

"Today we celebrate this win, tomorrow we continue to fight for the justice and equity that every American deserves."

The Respect for Marriage (RFM) Act does not confirm the right of same-sex couples to marry nationwide, as the U.S. Supreme Court did in Obergefell v. Hodges, but rather requires states to recognize their marriage licenses. It also does not block states from banning same-sex marriage if the high court's 2015 ruling is overturned—as Justice Clarence Thomas teased in his concurring opinion for the June decision that ended national abortion rights.