Maliki: Saudi Arabia and Qatar are at war with Iraq 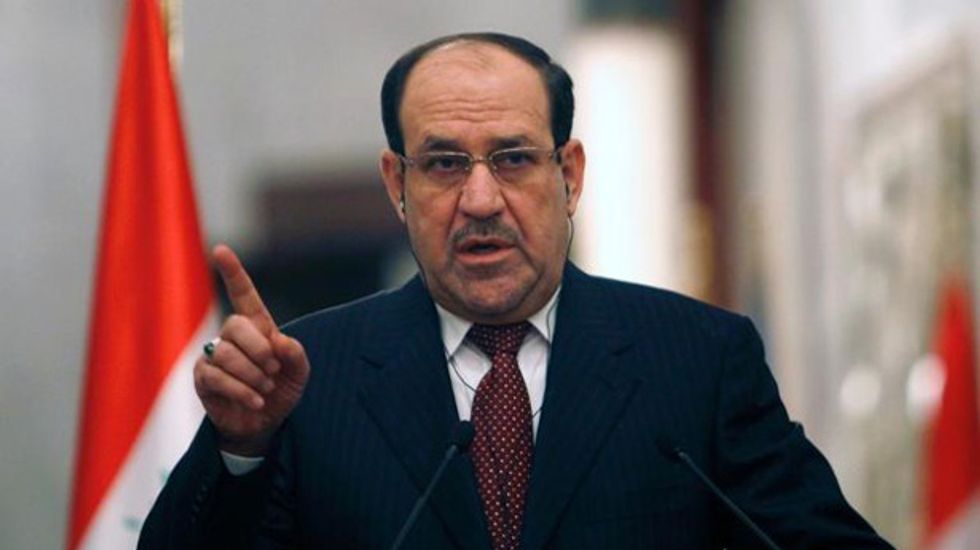 The rare direct attack on the Sunni Gulf powers, with Maliki also accusing Riyadh of supporting global terrorism, comes with Iraq embroiled in its worst prolonged period of bloodshed since 2008, with more than 1,800 people killed already this year, ahead of parliamentary elections due next month.

The bloodletting in Iraq, which shares a long border with Saudi Arabia, has been driven principally by widespread discontent among the country's Sunni Arab minority and by the civil war in neighbouring Syria.

Maliki, a Shiite, has in the past blamed unnamed regional countries and neighbours for destabilising Iraq.

But in an interview with France 24 broadcast on Saturday, Maliki said allegations he was marginalising Sunnis were being pushed by "sectarians with ties to foreign agendas, with Saudi and Qatari incitement."

Referring to the two countries, he said: "They are attacking Iraq, through Syria and in a direct way, and they announced war on Iraq, as they announced it on Syria, and unfortunately it is on a sectarian and political basis."

"These two countries are primarily responsible for the sectarian and terrorist and security crisis of Iraq."

He said Riyadh and Doha were providing political, financial and media support to militant groups and accused them of "buying weapons for the benefit of these terrorist organisations."

In the interview, Maliki also accused Saudi Arabia of supporting global terrorism, both inside the Arab world and in other countries.

He slammed "the dangerous Saudi stance" of supporting "terrorism in the world -- it supports it in Syria and Iraq and Lebanon and Egypt and Libya and even in countries outside" the Arab world.

Maliki in January blamed "diabolical" and "treacherous" Arab countries but has consistently refused to point directly at particular states.

But as violence has worsened markedly in Iraq -- the death toll from violence last month was more than double that of February 2013 -- and with elections due on April 30, Maliki has taken a hard line, pushing security operations against militants.

He has also called for greater coordination against militancy, with Baghdad due to host an international counter-terrorism conference on March 12.

Hamid was the second parliamentary candidate to be killed this year, after gunmen murdered Hamza al-Shammari last month.

Election candidates have been targeted in the past, with nearly 20 killed ahead of April 2013 provincial council elections.

In Samarra, also north of Baghdad, a shooting at a checkpoint killed two secondary school students and a policeman, while a roadside bomb blast in a village south of Sharqat killed two children.

Gunmen attacked a checkpoint in Sharqat, killing a police major and a policeman, while a roadside bomb in Khales killed army Lieutenant Colonel Abbas al-Rubaie and another soldier.

Iraqi soldiers and police are frequently targeted in bombings and shootings by militants opposed to the government.

In Baghdad, a car bomb exploded near a market in the Qahira area, killing at least four people and wounding 11.

And a shooting killed one person in the northern city of Mosul, one of the most dangerous parts of the country.

Violence has killed at least 110 people so far this month, and more than 1,800 since the beginning of the year, according to AFP figures based on security and medical sources.