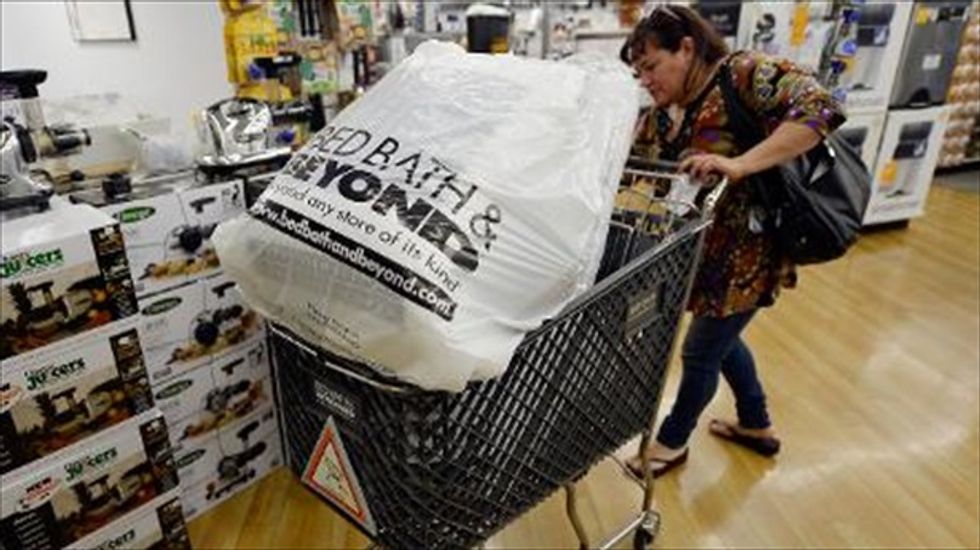 A customer pushes a shopping cart with bags from a Bed Bath & Beyond store on April 10, 2013 in Los Angeles, California [AFP]

WASHINGTON (Reuters) - U.S. factory activity rebounded from an eight-month low in February and consumer spending rose more than expected in January, suggesting the economy was regaining some strength after a recent slowdown.

The signs of momentum were also evident in other reports on Monday that showed a brisk increase in automobile sales in February and a surprise gain in construction spending in January, despite unseasonably cold weather.

"The economy is beginning the slow process of digging its way out of the weather-induced slowdown of recent months," said Millan Mulraine, deputy chief economist at TD Securities in New York. "This upward momentum should be sustained in the coming months"

The Institute for Supply Management said its index of national factory activity rose to 53.2 last month after slumping to 51.3 in January, which was the weakest reading since May.

A reading above 50 indicates expansion in the factory sector, and February's rise reversed two straight months of slow growth.

New orders bounced back last month as did supplier deliveries, inventories and order backlogs. However, production fell, notching its third straight month of declines and contracting for the first time since August 2012.

In a separate report, the Commerce Department said on Monday consumer spending increased 0.4 percent after gaining 0.1 percent in December.

Economists polled by Reuters had forecast consumer spending, which accounts for more than two-thirds of U.S. economic activity, edging up 0.1 percent in January.

January's increase in spending was driven by a 0.9 percent jump in services, the biggest gain since October 2001, after rising only 0.1 percent.

That likely reflected a increase in demand for utilities as Americans tried to keep warm during an unusually cold spell, as well as increased spending on healthcare after President Obama's signature 2010 healthcare law came into effect.

"Net net, consumers are off to a good start in January even if it is probably due in large part to higher home heating bills," said Chris Rupkey, chief financial economist at Bank of Tokyo-Mitsubishi UFJ in New York.

U.S. financial markets were little moved by the data as investors around the world kept a wary eye on escalating tensions from the crisis in Ukraine.

Data related to housing, industrial production, hiring and other economic indicators have suggested that the economy hit a soft patch early in the fourth quarter.

Much of the slowdown has been blamed on the cold weather and business placing fewer orders with manufacturers, as they work through stocks of unsold goods. The end of long-term jobless benefits and cuts to food stamps is also crimping growth.

The economy grew at a 2.4 percent annual rate in the fourth quarter, sharply decelerating from the July-September quarter's inventory-driven 4.1 percent pace.

With households spending more on utilities, outlays on goods fell 0.6 percent in January. A rise in auto sales last month suggested spending on goods would rise in February.

Despite the services-driven increase in spending, inflation pressures remain muted.

Excluding food and energy, the price index for consumer spending edged up 0.1 percent, rising by the same margin for a seventh straight month. Core prices were up 1.1 percent from a year ago, after rising 1.2 percent in December.

When adjusted for inflation, consumer spending rose 0.3 percent after falling 0.1 percent in December. The rise in so-called real spending could boost first-quarter GDP.

Income rose 0.3 percent in January after being flat the prior month. The drag on income from the expiration of jobless benefits for more than one million long-term unemployed people at the end of December was offset by government transfers for healthcare payments.

Income at the disposal of households after adjusting for inflation rose 0.3 percent in January after falling 0.2 percent the previous month.

With spending a touch above income growth, the saving rate, the percentage of disposable income households sock away, was unchanged at 4.3 percent in January. However, actual saving fell to its lowest level since March.