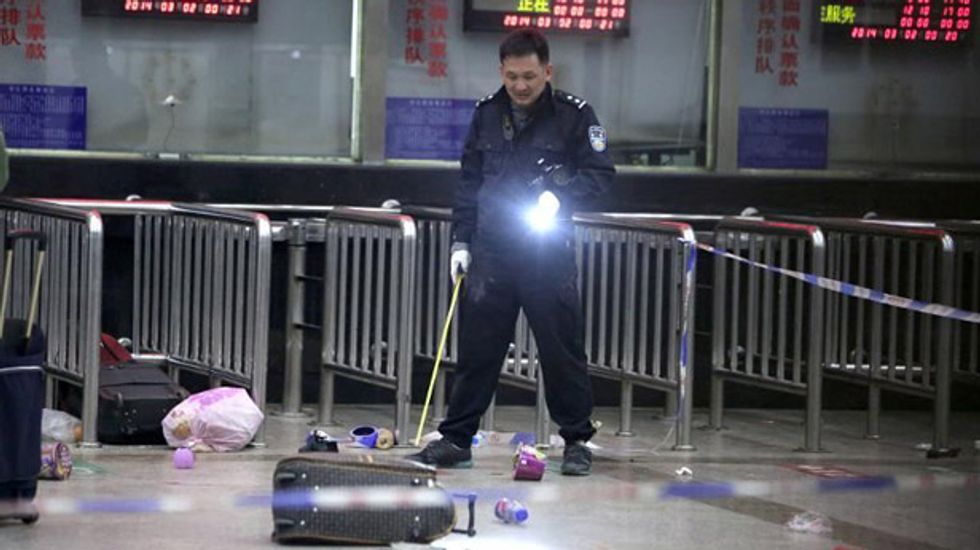 Chinese President Xi Jinping called for "all-out efforts" in the investigation and for the attackers to be punished "in accordance with the law", the official news agency Xinhua said.

Beijing's top security official was heading to the scene.

Police shot dead five of the attackers at the train station and were hunting the rest, it said.

Yunnan has no history of violent attacks, and it was not immediately clear who carried out the attack, or what motivated it.

A knife victim named Yang Haifei, who was wounded in the chest and back, told Xinhua that he had been buying a train ticket when the attackers approached and had tried to escape with the crowd.

"I saw a person come straight at me with a long knife and I ran away with everyone," he said, while others "simply fell on the ground".

Some who had escaped were desperately looking for missing loved ones.

"I can't find my husband, and his phone went unanswered," Yang Ziqing was quoted as saying.

She said she had been waiting for her train to Shanghai "when a knife-wielding man suddenly came at them".

Officers sealed off a wide area around the station, it added, while Xinhua said police were questioning people at the site.

"A group of men carrying weapons burst into the train station plaza and the ticket hall, stabbing whoever they saw," it said.

State broadcaster CCTV called the incident a "terrorist attack" on its Weibo account.

China's top security official Meng Jianzhu would travel to Kunming to oversee its handling, CCTV said, while President Xi Jinping and Premier Li Keqiang sent condolences to the victims and their families.

Photos posted on Sina Weibo showed blood spattered across the station floor and medical staff crouching over bodies lying on the ground, although the authenticity of the images could not be verified.

The photos showed crowds gathered outside among police officers and ambulances. The injured had been delivered to hospitals around the city, local television station K6 said.

A Weibo user going by the name HuangY3xin-Dione who was at a restaurant near the scene told how she saw a group of men in black with two long knives chasing people, Xinhua reported.

Another eyewitness told the Beijing News that she had seen two women in black walking towards the station and that some of the attackers had their faces covered.

Such incidents are rare in China, although knife and bomb attacks against local officials occur sporadically in the far-western region of Xinjiang, home to the mainly Muslim Uighur ethnic minority.

The Uighurs complain of cultural repression and tight security, while Beijing says it is facing a violent separatist movement.

Incidents involving Uighurs are often labelled "terrorist attacks" while others carried out by Chinese seen as having grievances against society or the authorities are not.

In a high-profile incident in Beijing last October, three Uighur family members set their car on fire at Tiananmen Square, the symbolic heart of the Chinese state, killing themselves and two bystanders.

The following month 41-year-old Feng Zhijun set off explosions outside a Communist Party office in the northern city of Taiyuan, killing one person and wounded eight.

Feng had previously served nine years in jail for theft and sought to "take revenge on society", Xinhua said.

In another prominent case last July, a wheelchair-bound man Ji Zhongxing set off a homemade bomb at Beijing's international airport in protest against alleged police brutality, but did not cause casualties.

Record-breaking NFL quarterback Tom Brady announced on Wednesday that he was "retiring for good" at the age of 45, one year after reversing his decision to quit the sport.

Brady, whose Tampa Bay Buccaneers lost in the wildcard round of the NFL playoffs last month, made his announcement calling time on his 23-year career in a social media video.

The lawsuit names top Trump campaign fundraiser and "Stop the Steal" supporter Caroline Wren as the defendant for tweeting “false and defamatory” statements about "Mr. Doe."

Former President Donald Trump has found himself in new potential legal trouble as Manhattan District Attorney Alvin Bragg has rebooted the investigation into the hush payments he arranged to adult film star Stormy Daniels to cover their alleged affair — a deal which sent his former attorney Michael Cohen to prison, but that legal experts had presumed Trump himself had escaped any punishment for.

It is not entirely clear why Bragg has decided at this time to pursue this case so seriously after years. However, wrote columnist Jen Rubin for The Washington Post, one former federal prosecutor has a theory.