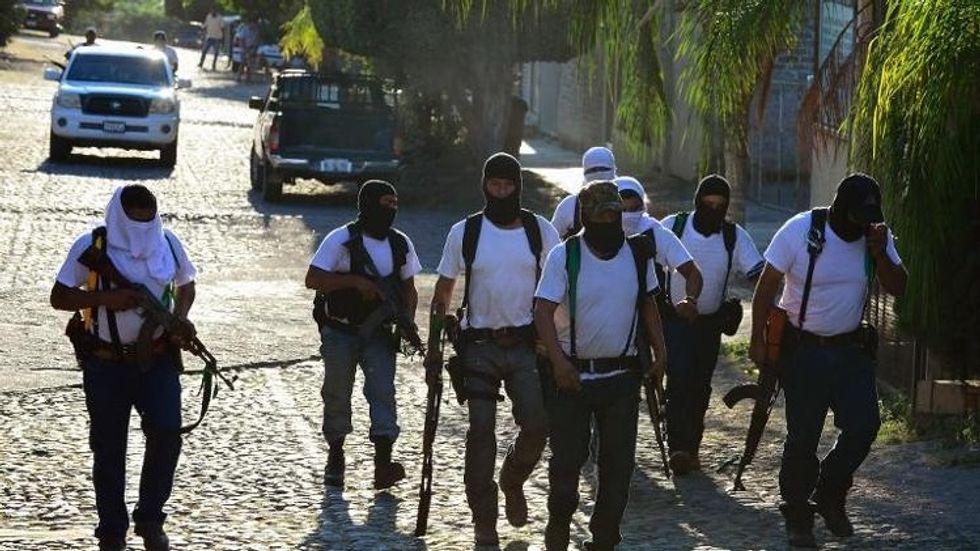 It seems 'The Craziest One', whose death had been announced before in 2010, really is dead – pleasing anti-cartel vigilantes

Even by drug lord standards, Nazario Moreno's reputation was as bizarre as it was brutal – including several years allegedly running his business from beyond the grave after he was officially pronounced dead in a shootout with federal forces. Now that the capo, nicknamed "The Craziest One", really does seem to have been killed, hopes are growing that the days are also numbered for his cartel, known as the Caballeros Templarios or Knights Templar.

"He was the key and the foundation of the Knights Templar," Catholic priest Gregorio López said in a phone interview from the cartel's stronghold region of Tierra Caliente in the western state of Michoacán. "Without him the whole thing will fall apart."

Moreno was felled early Sunday by soldiers and marines who had tracked him to a remote part of the sierra, government security spokesman Monte Alejandro Rubido said. The official stressed that the authorities closed in on the drug lord after they corroborated long-held rumours that he had not died in December 2010, as the then government had claimed despite the absence of a body.

"He is accused of responsibility for multiple murders and said to be in charge of indoctrination of the criminal group he continued to lead until today," Rubido said, adding that this time the authorities not only have the body, but that its finger prints match those of the trafficker who reportedly celebrated his 44th birthday on Saturday.

Moreno first rose to prominence as the spiritual leader of a new cartel calling itself La Familia, which announced its presence to the world in 2006 when a group of armed men rolled five heads onto a disco dance floor and left behind a written message describing the action as "divine justice". La Familia broke the mould of traditional Mexican trafficking groups with its cult-like organisation and quasi-religious rhetoric, mixed with claims to be guerrilla-like defenders of social justice.

La Familia split a few months after Moreno's official death at the end of 2010 amid a bloody turf war won by a faction calling itself the Caballeros Templarios that took the weirdness to new heights, introducing medieval paraphernalia into its rituals and propaganda.

The Caballeros also stepped up their exploitation of communities in the Tierra Caliente, imposing taxes on everything from the local lime harvest to tortillas, and reportedly rounding up pretty young women and girls at will.

The reign of terror triggered the formation of armed vigilantes who began taking on the cartel themselves, dramatically exposing how little the authorities were doing to protect their families.

With the vigilantes getting obviously out of hand, the government launched an offensive in the Tierra Caliente in January promising general disarmament, but this has since turned into collaboration between federal forces and the vigilantes, even as many fear these groups could develop into full blown paramilitary organisations exercising their own terror.

The vigilantes have always said they will only disarm when they are convinced the government is serious about taking down the cartel capos. Their insistence that Moreno was still among these was initially widely treated as a reflection of the power of the myth, rather than genuine intelligence.

"We always knew his death was a farce because people saw him around," vigilante leader Estanislao Beltrán said, adding that the capo was sighted at cock fights and parties. He did not confirm reports that the "dead" trafficker, for whom shrines pepper the region, travelled around on a white horse in full Caballeros garb.

"We are very happy that the government is finally doing its job," the vigilante leader said. "We are getting closer and closer, in coordination with the government, to cleaning Michoacán of all the criminals."

The double death of Moreno adds fuel to the scepticism with which many Mexicans have long responded to official declarations of narco deaths.

It took years for many to believe that Juárez cartel founder Amado Carrillo Fuentes, the so-called "Lord of the Skies," really had died in a botched plastic surgery operation in 1997. Meanwhile, questions still hand over the fate of Zetas cartel leader Heriberto Lazcano, alias El Lazca, officially killed in a shootout in 2012, though his body disappeared from a funeral parlour with identification tests still incomplete.

And while the blame for declaring Moreno's death prematurely clearly lies with former President Felipe Calderón, the current administration has also been embarrassed. In April last year the government reported the death of an important Caballeros leader called Francisco Galeana, nicknamed El Pantera. They did exactly the same again last month.