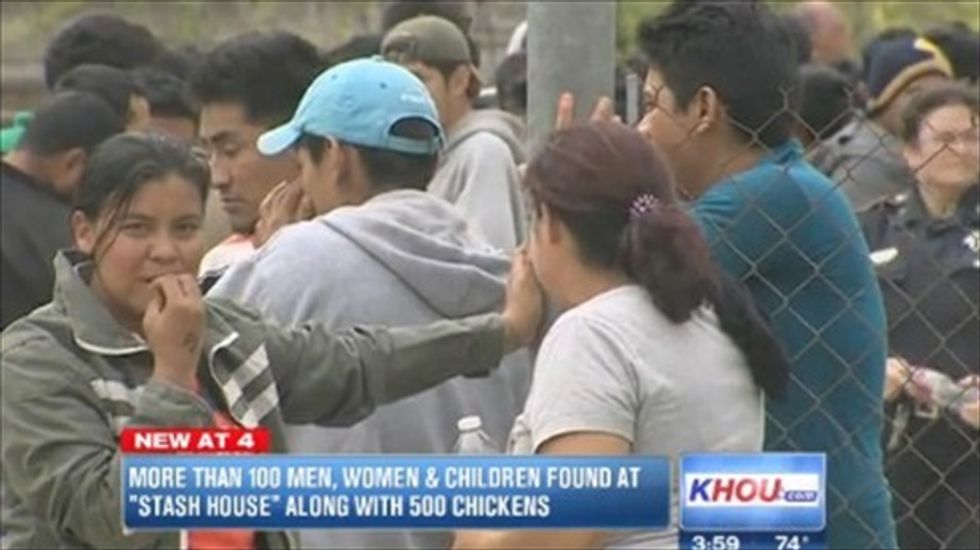 HOUSTON (Reuters) - Police found more than 100 foreign nationals from Central America and Mexico being warehoused in a rundown Houston-area residence during a raid on Wednesday into a suspected human smuggling operation.

Five people were arrested on suspicion of running the smuggling ring, while almost all of the group of 93 males and 15 females were also taken into custody on suspicion of entering the country illegally.

Many of the people came from Mexico, Guatemala, Honduras and El Salvador. There were also five children in the group, one as young as 5 years old, official said.

U.S. Immigration and Customs Enforcement spokesman Greg Palmore said this was one of the largest groups of people suspected of entering the country illegally discovered in a raid in several years in the border state of Texas.

"It's safe to assume it's an alleged smuggling investigation, but the extent hasn't been ascertained," Palmore said.

The group was being held in a 2,200 square-foot (204 square-meter) building with one bathroom, surrounded by land where pigs, geese and chickens were being kept, Palmore said.

Houston police found the group on the compound in south Houston while investigating a complaint of someone being held hostage, police spokesman John Cannon said.

The building's windows were covered with plywood, and the doors had locks on them that could only be opened from outside, Cannon said.

Many people were being held in trash-filled rooms that were so cramped, it looked like "a sea of people," Cannon said.

Several hundred chickens were also found on the premises, which police believed were used in illegal cockfighting. The chickens were turned over to the Houston SPCA, he said.

Watch a report aired Wednesday by KHOU-TV below.