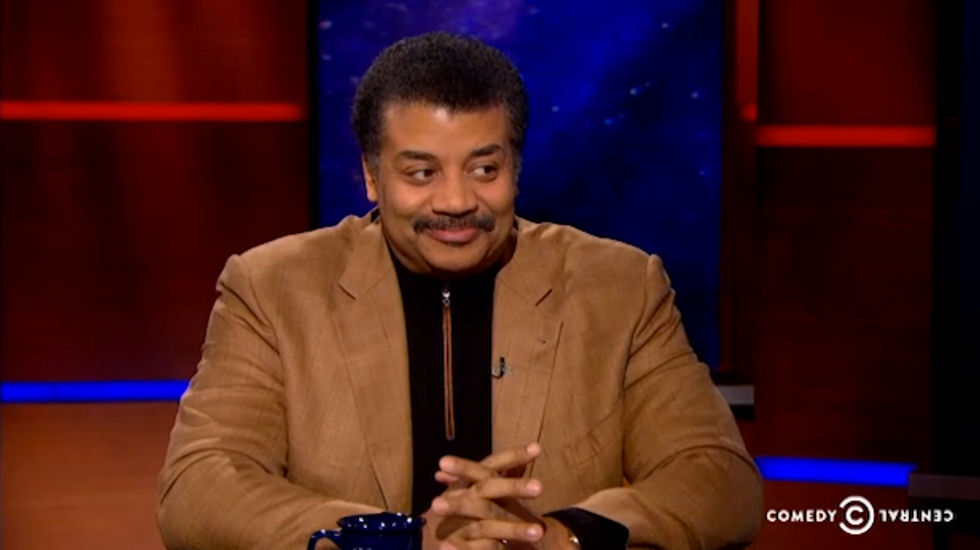 Host Stephen Colbert asked Tyson, who was promoting his new Fox documentary series, “Cosmos,” why he believed that opposing viewpoints were not necessary in every scientific debate.

“That would be a waste of everyone’s time,” Tyson said. “Once science has been established, once a scientific truth emerges from a consensus of experiments and observations, it is the way of the world. What I’m saying is, when different experiments give you the same result, it is no longer subject to your opinion. That’s the good thing about science: It’s true whether or not you believe in it. That’s why it works.”

Tyson, making his show-record 10th appearance on the program, told Colbert that Americans could make any arguments they wished, but he said no one has the right to be taken seriously.

Colbert asked Tyson what would most surprise Carl Sagan, the original host of “Cosmos” who died in 1996.

Tyson cited the theoretical multiverse among the most important scientific discoveries made since the original “Cosmos” series ended 34 years ago.

“There may not be just one universe; there may be many universes,” he said. “It’s a theoretical frontier at this point, but it’s an intriguing one, where there is a compelling argument for why it would be so.”

Scientists and historians do different types of work, Tyson said, referencing the Bible without mentioning it by name.

“We need written history to learn who lived and what they did as individuals and who was king and queen and conquerors,” Tyson said. “We don’t need the written stuff to tell us about the geology or the astrophysics. The written stuff is just to get human activities on the map. Otherwise, leave it out. I’ll tell you where the rivers flowed, where the sediments were laid, where the – we got that.”