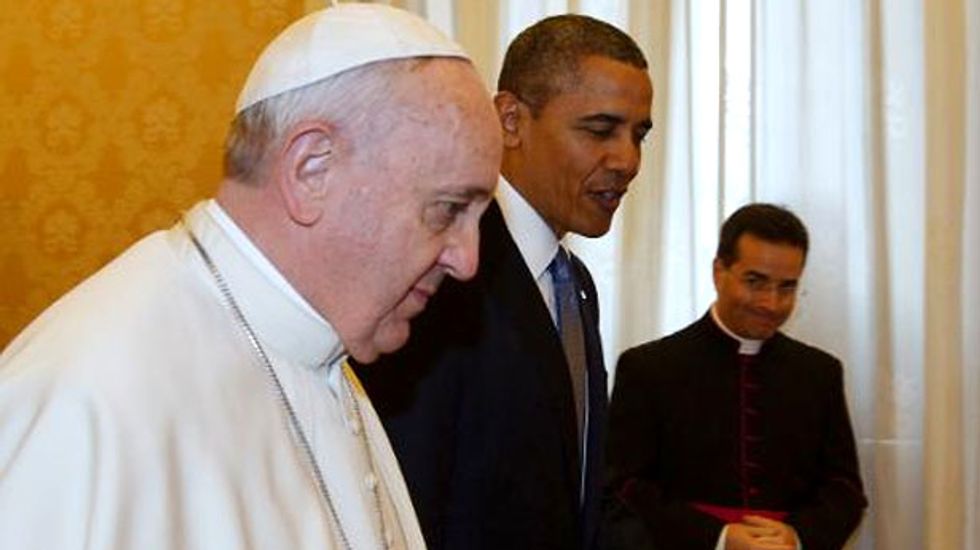 Barack Obama held a historic first meeting with Pope Francis on Thursday to discuss a shared agenda of fighting global inequality despite wide differences over issues like gay rights and contraception.

Obama told Francis he was a "great admirer" at the start of their talks at the Vatican, which political observers said could be a bid to boost the US president's support at home among Catholic voters.

Obama was accompanied by US Secretary of State John Kerry and the delegation was led through the Apostolic Palace to the pope's study by Swiss Guards and ceremonial aides known as Papal Gentlemen.

The first African-American US president spoke of the first pope from Latin America as an "inspiration" in an interview with the Corriere della Sera daily.

"The Holy Father has been an inspiration to people around the world, including me," Obama said, adding however: "It doesn't mean we agree on every issue".

The meeting comes as a welcome rest-stop for Obama during a six-day European tour dominated by the crisis over Crimea, and the US leader will doubtless be hoping some of the pope's stardom will rub off on him.

Obama is "mostly going I think to bask in the glow of the new pope," said Jeremy Shapiro, visiting fellow at Washington's Brookings institute.

His main aim will be "to highlight their sort of mutual attention to the problems of poverty and inequality. This isn't really a foreign policy stop," he said.

Ahead of the meeting, Francis celebrated mass for a group of 500 Italian politicians in which he warned them against becoming "hard-hearted" and "corrupt".

Diplomatic relations between Italy and the United States are close, though Rome has been cautious about imposing sanctions on Russia over the Ukraine crisis, amid fears it would take a toll on a key market.

Obama in his interview highlighted Italy's "critical role" in the Mediterranean region, praising Renzi for visiting Tunisia on his first foreign trip and saying Washington and Rome were collaborating to rebuild Libya.

Obama earlier this month said his calls for tax hikes on the rich and curbs on abuses by big banks had a strong moral grounding -- in an election-year swipe at Republicans and echoing the pope's rallying cry for action to curb growing inequality around the world.

However, Vatican experts say the relationship is not as cosy as it once was between pope Jean Paul II and Ronald Reagan, and Francis is unlikely to refrain from tackling Obama on his domestic and foreign policy.

Vatican expert John Allen wrote in the Boston Globe that the Obama administration would like to create "the impression of a grand alliance on behalf of the world's poor... both as part of his eventual legacy and with an eye towards the mid-term elections looming this fall".

But he pointed to "contrasts" and "sharp differences" and said that "a deep partnership between the two leaders... may not be in the cards".

The pontiff spoke out strongly against a proposed military intervention by the US in Syria last year, organising a mass prayer vigil at the Vatican.

Controversy surrounding the Affordable Care Act and Obama's drop in popularity risk resulting in a Republican victory in the upcoming Senate election, which would dramatically weaken the US leader for his remaining two years in power.

Words of support from Francis would certainly boost his case: a survey by Saint-Leo University found Francis was popular with 85 percent of Catholics and 63 percent of Americans.