Obama: Russia is acting 'out of weakness' in Ukraine 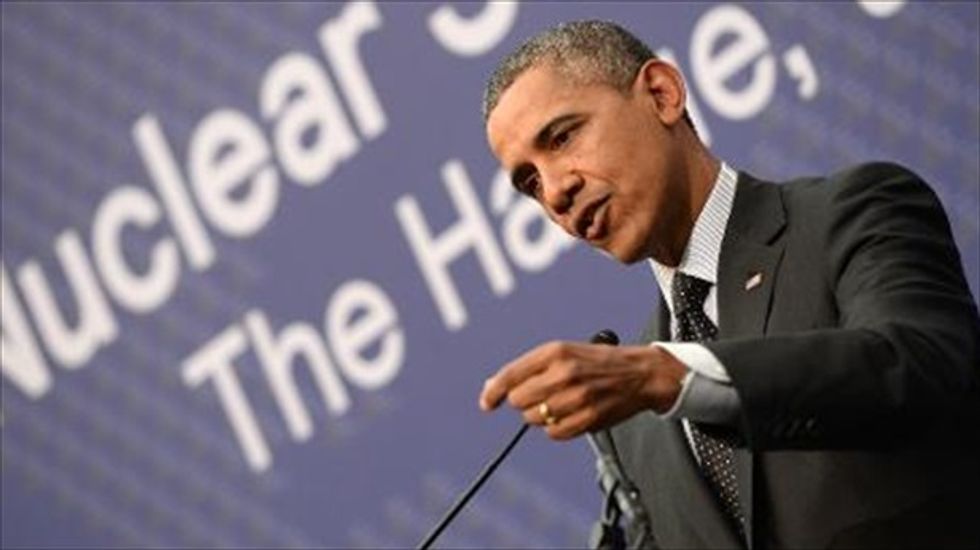 President Barack Obama holds a press conference at the Gemeentemuseum in The Hague on March 25, 2014 at the end of the Nuclear Security Summit (NSS) [AFP]

U.S. President Barack Obama has hit out at Moscow's expansionism as a "sign of weakness" after Russia took control of the Crimean peninsula from Ukraine, fuelling fears of further intervention.

"Russia is a regional power that is threatening some of its immediate neighbours, not out of strength but out of weakness," Obama told journalists after a nuclear security summit in The Hague on Tuesday.

Obama said that while the United States also has influence over its neighbours, "we generally don't need to invade them in order to have a strong cooperative relationship with them."

The Crimean crisis has sparked the most explosive East-West confrontation since the Cold War and fanned fears in Kiev that Russian President Vladimir Putin now intends to push his troops into southeast Ukraine.

"The fact that Russia felt (the need) to go in militarily and lay bare these violations of international law indicates less influence, not more," Obama said, rejecting Putin's claim that Russian speakers had been threatened in Crimea and Ukraine.

"There has been no evidence that Russian speakers have been in any way threatened," Obama said, the day after western powers cancelled a Group of Eight summit by suspending Russia from the club of rich nations.

"It is important for everybody to be clear and strip away some of the possible excuses for potential Russian action," he said, before heading for his first European Union-US summit in Brussels.

Ukraine's parliament on Tuesday sacked the crisis-hit country's defence minister, after his forces undertook a humiliating withdrawal from Crimea without firing a shot against Russian forces who claimed the Black Sea peninsula.

"The assault team is on board the Cherkasy. The crew has been barricaded inside the trawler. The assault is on," said defence ministry spokesman Vladyslav Seleznyov in a statement posted to Facebook.

The self-proclaimed, pro-Moscow leader of the Crimean port city of Sevastopol, Alexey Chaly, meanwhile disbanded its pro-Russian militia, saying, "the revolution is over."

"We are starting to live according to Russian laws," he told militia commanders.

The effective loss of Crimea -- though recognised by no Western power -- has dealt a heavy psychological blow to many Ukrainians, who have already spent the past years mired in corruption and economic malaise.

Ukraine's ground commanders in Crimea had complained bitterly of confusion among the top brass in Kiev since Putin's decision on March 1 to seek the right to use force against his neighbour in response to last month's fall of the pro-Kremlin regime of Viktor Yanukovych.

Tuesday's parliament session gave Ukrainian lawmakers a chance to voice growing frustrations with how the new Western-backed leaders have handled their jobs since coming to power on the back of three months of deadly protests whose ultimate aim was to eliminate the corruption and Kremlin dependence that have weighed on Ukraine throughout its post-Soviet history.

Tensions between the two neighbours seemed ready to spike further when Russian television aired what it claimed was a tape of former Ukrainian premier Yulia Tymoshenko -- an opposition leader released from jail after the pro-Kremlin regime's fall -- urging the "wiping out" of Russians over the seizure of Crimea.

Tymoshenko admitted that her voice was on the tape but insisted that her comments had been manipulated.

Obama's G7 summit in The Hague sought to ward off the threat of further Russian expansion with a more forceful response after two rounds of targeted sanctions that hit only specific officials but left Russia's broader economy untouched.

The leading powers agreed on Monday to deepen Moscow's isolation and meet on its own -- without Russia -- in Brussels instead of gathering in Sochi in June.

Obama on Monday said the group was "united in imposing a cost on Russia for its actions", in reference to the travel bans and asset freezes imposed by the West on key members of Putin's inner circle.

Russia's loss of the right to host the G8 summit is a moral blow to Putin -- a leader whose 14 years in power have focused on resurrecting the Kremlin's post-Soviet pride.

But the Kremlin shrugged off the seven world leaders' decision as "counter-productive" but otherwise harmless.

"When it comes to contacts with the G8 countries, we are ready for them, we have an interest in them," Kremlin spokesman Dmitry Peskov told the ITAR-TASS news agency.