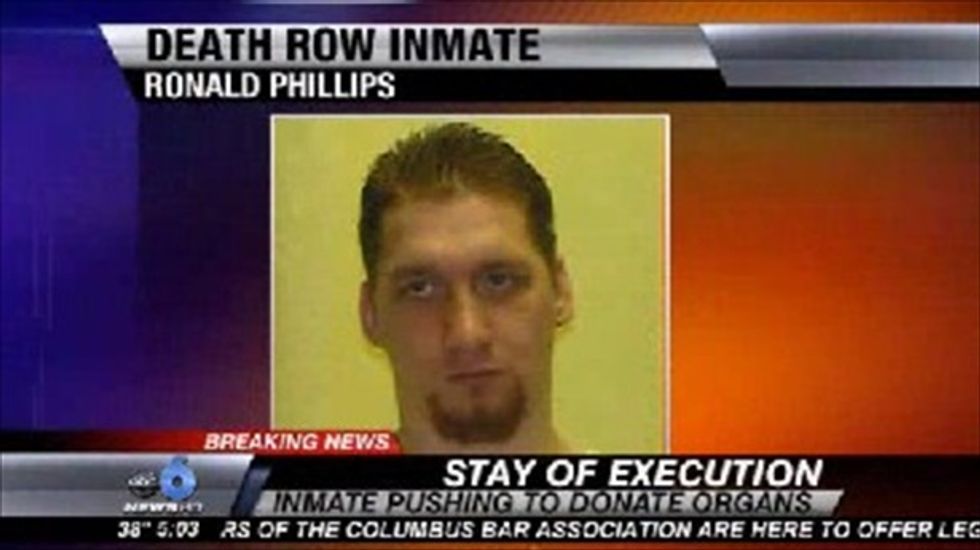 CLEVELAND (Reuters) - Ohio rejected a request from a death row inmate to donate a kidney to his mother, saying there was not enough time for transplant surgery ahead of the execution.

Ronald Phillips, 40, convicted of the rape and murder of a 3-year-old girl, had his execution postponed by Governor John Kasich to July 2 from November to see if the inmate could make the donation of organs, including a kidney to his mother, who Phillips said suffers from kidney disease.

The Ohio Department of Rehabilitation and Correction said on Friday it gave Phillips a March 23, 2014, deadline to undergo the kidney transplant, or any other transplant, to family members.

"It appears certain Mr. Phillips will not be undergoing any organ donations and transplantation surgery on or before March 23, 2014," the department said in a letter to Phillip's lawyer, adding the execution would go on as scheduled.

In January, the department denied a broad request from Phillips for harvesting organs after the execution, saying it was not equipped to do so, and that the process may not be medically feasible.

"Mr. Phillips should be advised that despite his wish to donate his organs post-execution, his request may not be honored by any federally approved procurement and/or hospital transplant center," it said.

The department left the door open for the kidney transplant and for the family to harvest any organs or tissue after the state handed over the body to them.

It also noted that as of January, the mother did not appear to be on a federal waiting list for organ donations and there was no request from a federally approve transplant hospital for Phillips to donate his kidney to her.