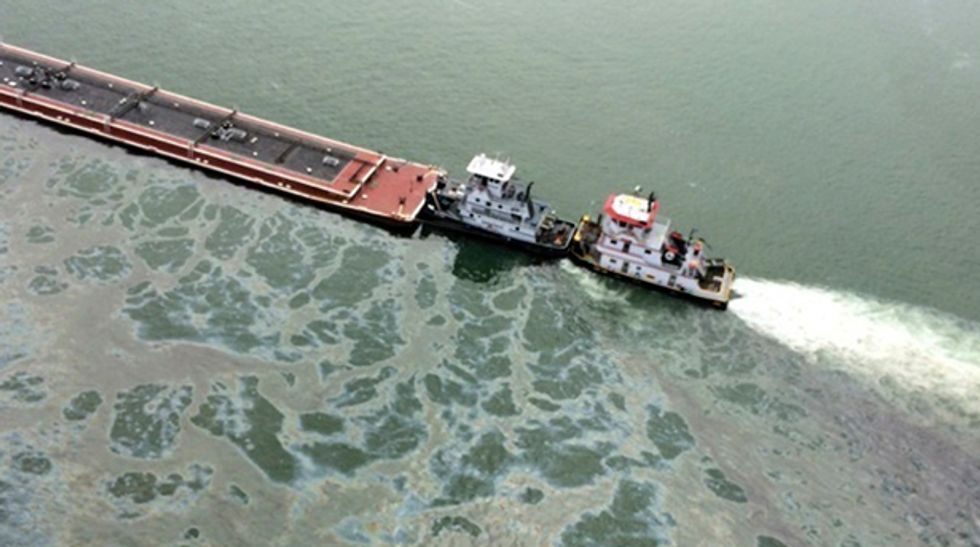 A barge loaded with marine fuel oil sits partially submerged in the Houston Ship Channel in this U.S. Coast Guard picture taken March 22, 2014. The barge leaked oil into the Houston Ship Channel after colliding with another ship near Texas City on Saturday and emergency responders laid down floating barriers to contain the spill, U.S. Coast Guard officials said. The barge, which was being towed by the motor vessel Miss Susan, contained 168,000 gallons (636,000 liters) of fuel oil in the tank that was breached in a collision with a bulk carrier, the Summer Wind, said a Coast Guard spokeswoman. Picture taken March 22, 2014. REUTERS/US Coast Guard/Handout via Reuters (UNITED STATES - Tags: DISASTER MILITARY ENVIRONMENT ENERGY) ATTENTION EDITORS - THIS PICTURE WAS PROVIDED BY A THIRD PARTY. REUTERS IS UNABLE TO INDEPENDENTLY VERIFY THE AUTHENTICITY, CONTENT, LOCATION OR DATE OF THIS IMAGE. THIS PICTURE IS DISTRIBUTED EXACTLY AS RECEIVED BY REUTERS, AS A SERVICE TO CLIENTS. FOR EDITORIAL USE ONLY. NOT FOR SALE FOR MARKETING OR ADVERTISING CAMPAIGNS

TEXAS CITY, Texas (Reuters) - Four skimming boats surrounded a partially submerged barge on Sunday at the entrance to the Houston Ship Channel, working to clean up fuel spilled from the vessel into Galveston Bay after a Saturday collision with a cargo ship, according to a Reuters eyewitness.

The Channel will remain shut "until clean water is assured," Penoyer told reporters at a news conference in Texas City.

Eight refineries accounting for nearly 12 percent of U.S. refining capacity are cut off from crude oil tankers while the 53-mile (85-kilometer) waterway linking the busiest U.S. petrochemical port to the Gulf of Mexico is shut.

A local official said the channel was expected to be shut for all of Sunday and possibly Monday. The official asked not to identified as the information had not yet been made public.

The Coast Guard said crews completed pumping the remaining fuel oil in the barge's undamaged tanks onto another ship. Next, the Coast Guard will have to move the barge from its location at the entrance to Galveston Bay.

The Ship Channel is 55-foot (17-meter) deep pathway for barges and deep-draft ships cut into the floor of Galveston Bay, which averages 20 feet in depth.

The closure also affected shipping along the Intracoastal Waterway where it intersects the Ship Channel.

Carnival Corp's Carnival Magic cruise liner was delayed on Sunday from returning to the Port of Galveston due to the spill, according to a Carnival spokesman.

Penoyer said the Coast Guard was making arrangements to allow the Carnival Magic and the Carnival Triumph, due in Galveston on Monday, to dock.

The barge is operated by Kirby Inland Marine. A Kirby operated barge carrying fuel oil collided with a ship carrying rice at nearly the same location on March 14. In that accident, the cargo ship was damaged, but no fuel oil was spilled.

This is a far smaller spill than that by the Exxon Valdez tanker, which struck a reef in Prince William Sound, Alaska, in 1989.

A total of 11 million gallons of heavy black crude oil were estimated to have been released by the Exxon Valdez.

In contrast, only one tank on the barge was ripped open by the collision with the cargo ship in the Houston Channel on Saturday, releasing an estimated 168,000 gallons.

Wildlife Response Services, a Texas-based wildlife rehabilitation service, is helping affected birds and marine life. The service has not said how many animals have been received for cleaning.

In addition to four skimming vessels working on the spill, another 20 response vessels were standing by to help with the cleanup on Sunday, the Coast Guard said. About 90,000 feet of boom were staged along the Texas City dike for containment deployment.

Emergency response crews have also laid down floating barriers in hopes of containing the spill.

Gableman’s threat to arrest leaders of the opposing party continued his antagonism of Democrats after an appearance in front of the Assembly Committee on Campaigns and Elections earlier in the week resulted in a shouting match with Rep. Mark Spreitzer (D-Beloit).