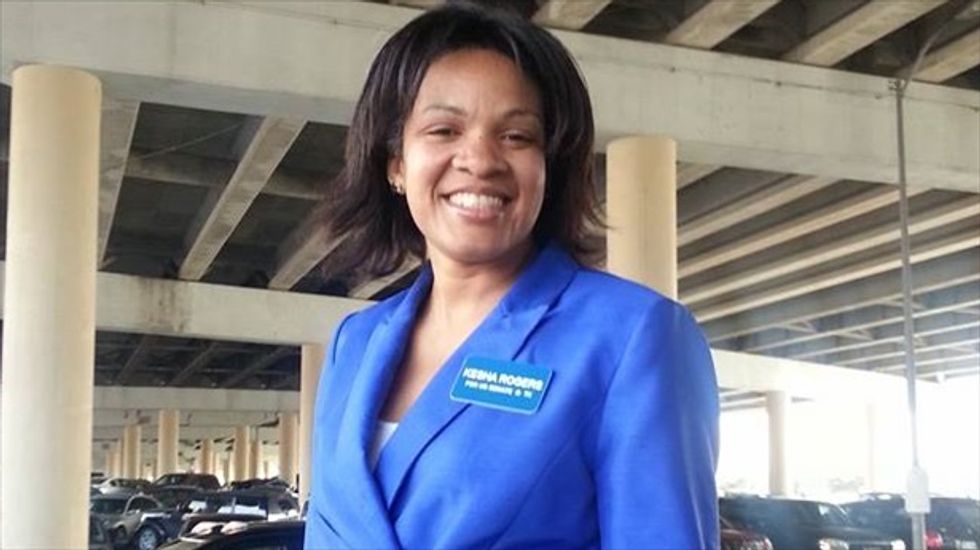 The Texas state Democratic Party is distancing itself from a senatorial candidate currently leading in a party primary despite being decried by party leadership.

The Hill reported on Monday that self-identified "LaRouche Democrat" Kesha Rogers was revealed as the front-runner among Democratic challengers taking on incumbent Sen. John Cornyn's (R-TX) in a poll released by the University of Texas-Austin and the Texas Tribune.

Both Republican and Democratic Party voters will choose their respective candidates on Tuesday. Cornyn is expected to retain his party nomination.

"This is what it looks like when you have a bunch of candidates, no infrastructure and no money," poll director Jim Henson told the Tribune. "The first person to raise some money and run some ads could really move this."

Rogers is a follower of perennial political gadfly Lyndon LaRouche, who mounted seven unsuccessful presidential campaigns between 1980 and 2004. He was convicted of fraud in 1988 and was paroled after serving five years of a 15-year sentence. LaRouche is the object of veneration by a small movement that some have characterized as a political cult.

Rogers' platform includes calls for the impeachment of Obama, the repeal of the Affordable Care Act, and the re-institution of the Glass-Steagall Act. According to the Texas-based Burnt Orange Report, Rogers released a video in 2012 depicting Obama with an Adolf Hitler-styled mustache, which includes the line, "His doctor should administer some pentothal of sodium," referring to the chemical used in lethal injections in prison.

Despite receiving less funding than opponents David Alameel and Maxey Scherr, not to mention the lack of party backing, the poll showed 35 percent of respondents said they were more likely to vote for Rogers, compared to 27 percent for Alameel and 15 percent for Scherr.

"That poll was, to put it bluntly, nonsense," a spokesperson for Alameel's campaign,Suzie Dundas, told The Hill. "Our internal results are showing us doing very well."

However, state party officials admit to opposing her candidacy and sending material criticizing her to voters across Texas.

"With the possibility of a low information election, you always want to make sure folks have some information to make their decision," party spokesperson Manny Garcia was quoted as saying.

"Rogers' candidacy is an insult to our Party, our President, our state, our Democratic values, and to all the work you are doing to move our state forward," Hinojosa's email read.