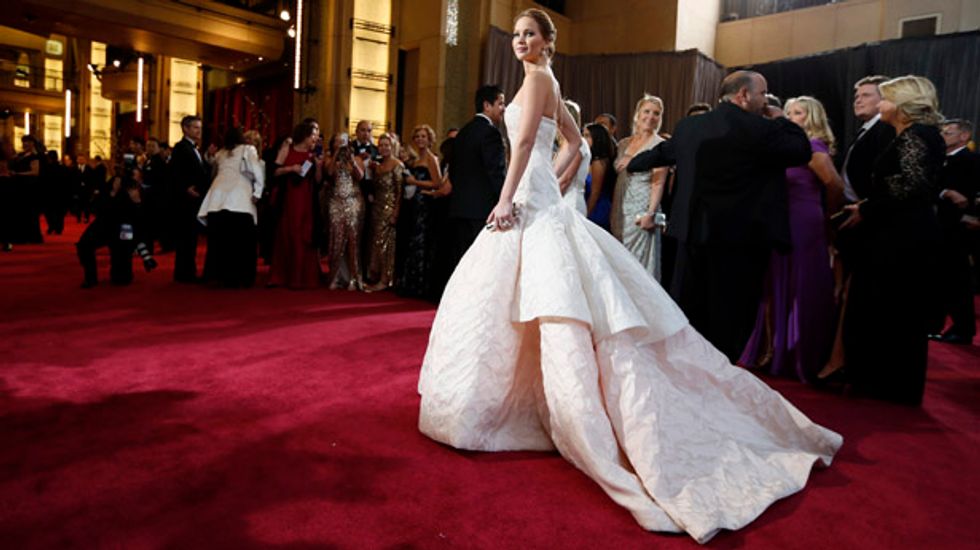 Best Actress nominee Jennifer Lawrence for her role in "Silver Linings Playbook", wearing a white Dior Haute Couture gown, poses at the 85th Academy Awards in Hollywood, California in this February 24, 2013 file photo. Success on the red carpet can buy cachet that no advertising can - both for designers and stars - and profits for luxury brands for years to come. With stakes that high, the more established houses are raising their game and leaving little room for newcomers to make a splash, like they might have a decade ago. To match story OSCARS-FASHION/ REUTERS/Lucy Nicholson/Files (UNITED STATES TAGS:ENTERTAINMENT

LOS ANGELES (Reuters) - When Jennifer Lawrence tripped on her way to accept her best actress Oscar last year, her blush pink princess-like Dior Haute Couture gown was captured in all its glory as the unscripted moment made ripples around the world.

That bonus air-time for a single dress at one of the world's premier global events is priceless for the likes of Dior, one of the strongest fashion houses in the cutthroat marketplace that the Oscars red carpet is today.

Success on the red carpet can buy cachet that no advertising can - both for designers and stars - and profits for luxury brands for years to come. With stakes that high, the more established houses are raising their game and leaving little room for newcomers to make a splash, like they might have a decade ago.

The red carpet, which will be televised live before the March 2 Academy Awards ceremony, presents "a great and free opportunity" for a designer to reach an audience that expands beyond the fashion set, said Ariel Foxman, editor of fashion magazine InStyle.

"It's free marketing," Foxman said. "Advertising dollars are so expensive, and marketing budgets are so fractured these days with social media, digital media, print media and television media, so it's more valuable than ever."

One way of estimating the monetary benefits of having a standout dress on the red carpet is to compare how much a brand would otherwise spend on commercial advertising during the same time, said Milton Pedraza, chief executive officer of the Luxury Group Institute, a consulting firm.

According to a report by Kantar Media released this week, the average cost of a 30-second advertising spot during the 2013 Oscars was $1.65 million. The show was watched by 40.3 million viewers in the United States and several hundred million more across the world.

For Lawrence's 2013 Oscar acceptance speech and her accidental trip on the stairs to the stage, she had more than 75 seconds of solo camera time. For a commercial spot of the same duration at the same time, Dior would have had to pay more than $4 million. And this doesn't include the time dedicated to Lawrence and her gown on the pre-show televised red carpet.

For this year, Kantar Media estimates that a 30-second advertising spot will cost brands an average of $1.8 million during the primetime show.

Lawrence, 23, who is nominated again this year in the best supporting actress category for "American Hustle," is a Dior brand ambassador, wearing the Paris fashion house's designs to all her public events.

While Christian Dior group has not disclosed how much it paid for its deal with Lawrence and doesn't discuss her impact on its sales, the high-end couture label is on the rise. In 2013, couture's profits totaled 165 million euros ($226 million), up 26 percent from 2012.

While the Oscars has launched newcomer designers such as Olivier Theyskens, worn by Madonna in 1998, and Elie Saab, donned by Halle Berry when she won best actress in 2002, the big names in fashion don't leave much room for new talent anymore, said Hollywood fashion publicist Marilyn Heston.

"For young designers, finding their way into this world, it's really difficult," Heston said. "It's much more difficult to get successful placements for the big events when the eyes of the world are watching, the stakes are higher and there are more people in the game."

With the red carpet in mind, many of the top fashion houses have created capsule couture lines, such as Chanel Haute Couture, Atelier Versace, Armani Prive and Gucci Premiere, which are the highest of the high end.

For British designer Georgina Chapman, co-founder of Marchesa, the red carpet launched her then-unknown brand in 2004 when actress Renee Zellweger wore a red and gold Marchesa dress to the premiere of "Bridget Jones: The Edge of Reason."

"The next day, the dress was on the cover of every single newspaper and there was Marchesa written as well. And it really hit home that this is what a red carpet can do for a brand," said Chapman, who is married to one of Hollywood's most powerful men, film producer Harvey Weinstein.

The pinnacle for Marchesa came in 2010 when Sandra Bullock won the best actress Oscar wearing a gold sequined gown by the brand. Chapman said the dress received 40 million mentions in media.

The ultimate coup for a designer is to dress a young rising star on the Oscar red carpet, as fashion houses are trying to appeal to millennials who are likely to become customers as they earn more money, Pedraza said.

This year, all eyes are on "12 Years a Slave" best supporting actress nominee Lupita Nyong'o, who has so far captivated fashion critics with her vibrant color choices.

From a vermillion Ralph Lauren column gown with a cape at the Golden Globes, a turquoise figure-hugging Gucci dress with a floral detailed neckline at the Screen Actor's Guild Awards, to a jade Dior Haute Couture gown at the BAFTAs in London, the 30-year-old actress has topped the best-dressed lists.

Nyong'o's fashion hits have cast a spotlight on her stylist, newcomer Micaela Erlanger, whose savvy picks have showcased the actress' versatility, made her a fashion muse almost overnight, and helped her land a campaign with luxury brand Miu Miu.

"Having that standout moment or having that public image is really an integral part of building someone's persona," said Erlanger.

As for what the Kenyan actress will wear on the Oscars red carpet, Erlanger isn't giving any clues. She has been scouring runways at this month's fashion presentations in New York and London in search of a standout dress.

"There should be an element of surprise, and that's what keeps everyone interested. I might go for the whimsy and unexpected but keep it modern and classic at the same time," the stylist teased.