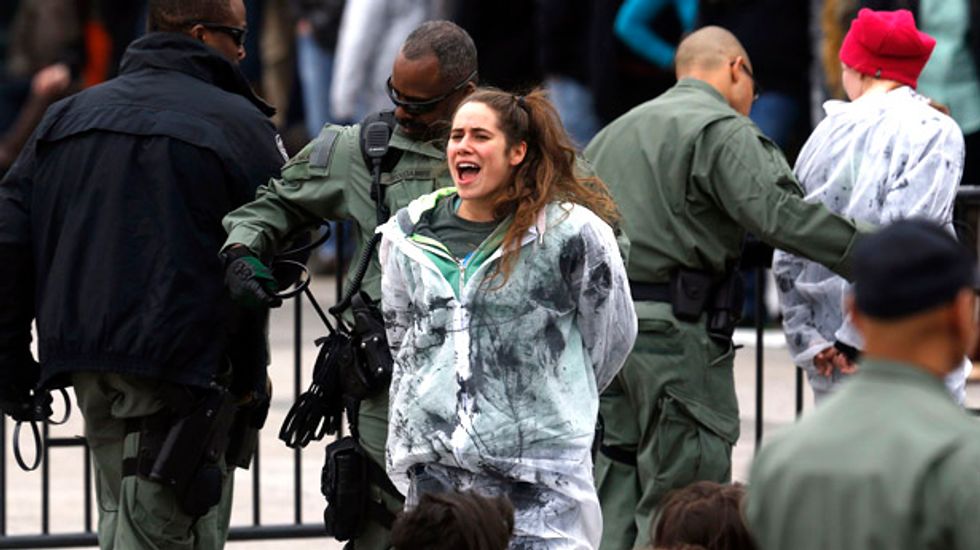 An environmental activist sings and cheers as she and others are detained as they hold a rally in opposition to the Keystone XL Pipeline on the sidewalk in front of the White House at the White House in Washington March 2, 2014. Up to 1,000 protesters demonstrated against Keystone, which would carry 800,000 barrels a day of crude oil from Canada to the U.S. Gulf, on Sunday outside Secretary of State John Kerry's house in Washington before risking arrest at the White House. The State Department acted properly in its choice of an outside contractor to review Keystone, a U.S. report said on Wednesday. Environmentalists said the report showed the approval process was irresponsible and vowed to keep fighting Keystone. REUTERS/Jonathan Ernst (UNITED STATES - Tags: POLITICS ENERGY CIVIL UNREST)

WASHINGTON (Reuters) - Police arrested dozens of young people protesting the Keystone XL project on Sunday, as demonstrators fastened themselves with plastic ties to the White House fences and called for U.S. President Barack Obama to reject the controversial oil pipeline.

Participants, who mostly appeared to be college-aged, held signs reading "There is no planet B" and "Columbia says no to fossil fuels," referring to the university in New York.

Another group, several of whom were clad in white jumpsuits splattered with black ink that was meant to represent oil, lay down on a black tarp spread out on Pennsylvania Avenue to stage a mock spill.

Organizers estimated 1,000 people protested and said several hundred agreed to risk arrest by refusing to leave the sidewalk in front of the White House.

"If the Democratic Party wants to keep our vote, they better make sure President Obama rejects that pipeline," said Nick Stracco, a 23-year-old student at Tulane University in New Orleans.

Canadian energy firm TransCanada Corp is behind the proposed pipeline that would carry crude from Alberta's oil sands to refineries on the U.S. Gulf Coast. Supporters say it would create thousands of jobs.

The project already weathered a State Department environmental review, which was required because the project would cross international borders. Several other agencies also are doing reviews, and Obama has final say.

Environmental groups, who fear oil spills along the pipeline and say it could hasten climate change, have staged a number of protests at the White House over Keystone.

Sunday's event, which was planned by students with support from environmental groups 350.org and the Energy Action Coalition, began with a rally at Georgetown University, where Obama unveiled a new climate change plan last summer.

The group marched to the White House, where police began arresting protesters, pulling them aside in small groups into tents set up on Pennsylvania Avenue.

Organizers said they intended to remind the White House that young people are a key voting demographic of the president's party and their peers do not want to inherit environmental damage caused by current leaders.

"Our future is on the line. The climate is on the line," said Aly Johnson-Kurts, 20, who is taking a year off from Smith College in Massachusetts. She said she had decided to get arrested on Sunday. "When do we say we've had enough?"