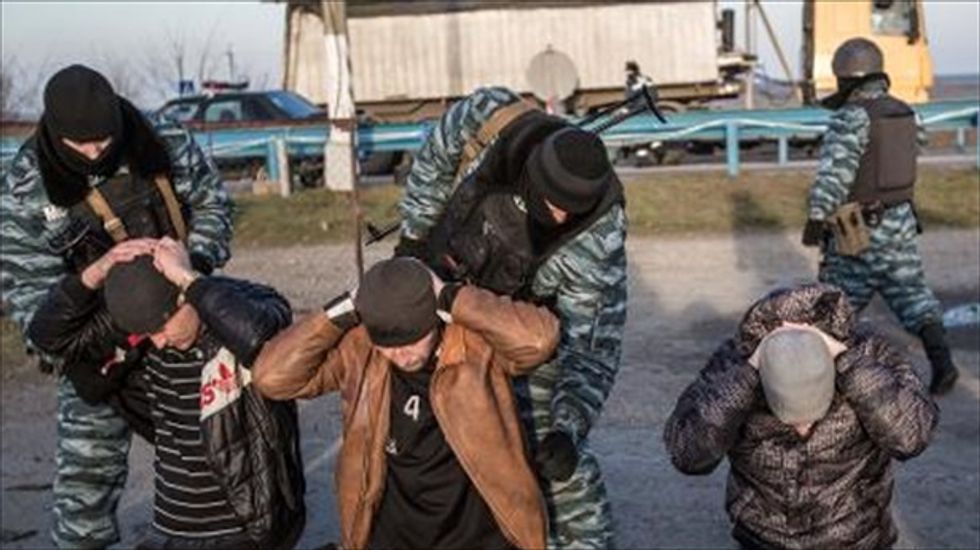 On the roads, at the train stations and the airport, a ragtag militia of pro-Russian forces is gradually squeezing the links that connect Crimea to the rest of Ukraine.

They are a mixture of civilians wearing red armbands, Cossacks and policemen loyal to the new pro-Russian regime in the breakaway region.

They are there to protect what they believe is now all-but formally Russian territory from the "right-wing extremists" who took power in Kiev last month.

One morning this week, several dozen of the men patrolled the station in Simferopol, the main rail link to the world outside the Black Sea peninsula.

"We interfere only with people who come from the north or west," said 50-year-old Viktor, who refused to give his surname. On his shoulder is a badge saying "Cossacks of Simferopol".

"We're mostly interested in groups of young men, particularly those carrying large bags that could be concealing weapons," he said.

"I've never found anything, but someone told me that yesterday they found a pistol. These Nazis of Pravy Sektor (the hard-right nationalist movement in Ukraine) are very dangerous. They want to punish the Russians."

The overnight sleeper from Kiev arrives at 9:40 am. At the stairs leading off the platform, Viktor's group accosts men travelling in groups of two or more. They ignore older people and women, even if they have large cases.

In normal times, civilians whose only authority is a red armband do not have the right to demand passports. But these are not normal times, and few dare defy them.

One who does quickly complies when a policeman -- sporting a Ukranian badge, but taking his orders from the authorities in Crimea -- steps in.

Dmitry, a young man wearing a Michael Jordan baseball cap, does not mind opening his bag up for its contents to be peered at.

Igor, an older man in a fur hat, agrees. "We must defend this land and its people, and avoid provocations," he says.

Around 100 men search passengers who get off the overnight trains. They find nothing suspicious and head back to their base or to other duties around the city.

On the roads leading in and out of the peninsula, it is the same story.

For more than a week now, nervous-looking armed men wearing the colours of the Russian flag have had control of the roads.

Two main arteries link Crimea with mainland Ukraine. It was on these roads that the observers from the Organisation for Security and Cooperation in Europe (OSCE) were turned back as they tried to enter Crimea.

At the entrances to major cities in the rugged peninsula of two million people, motorists have to wind their way slowly though huge concrete blocks that form chicanes. Sandbagged gunposts are manned by Cossacks in their distinctive hats.

The grip these pro-Russian forces have on Crimea has slowly tightened since armed commandos stormed the local parliament on February 27, less than two weeks ago.

On Tuesday, pro-Kremlin militants who took over air traffic control ordered a suspension of all flights in or out of Crimea's main airport in Simferopol except those connecting to Moscow.

While the leaders in Kiev and their Western allies in Paris, London and Washington insist that Crimea remains an integral part of Ukraine, the plain truth on the ground is that has slipped from their grasp.

Whether they recognise it or not, Sunday's referendum that will ask Crimeans if they wish to become part of Russia will make little practical difference.

But for people like Viktor, it is just the latest step on the road back to where Crimea has always belonged.

The gifting of Crimea to Ukraine in 1954 by then-Soviet leader Nikita Khrushchev "meant nothing," says Viktor.

"It wasn't important that he gave it to Ukraine -- it could just have easily been to China. We have always been Russian here, and we're going back to being part of Russia, that's all."