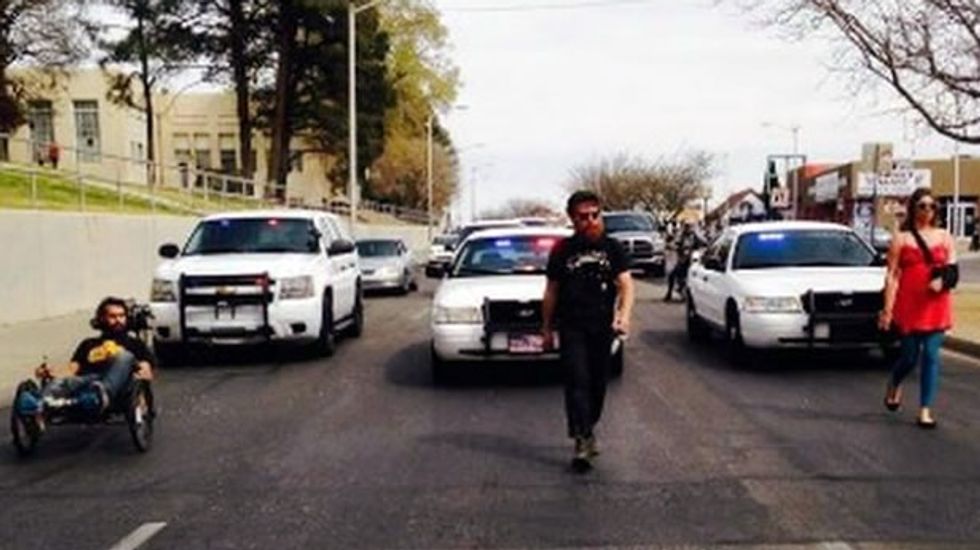 What began as an online protest of the Albuquerque Police Department's (APD) shooting of a man last week escalated into a 12-hour-long confrontation with riot-gear-clad police on the streets of Albuquerque yesterday.

The protest began peacefully, outside of the APD headquarters, where about 500 people demanded justice and accountability for James M. Boyd, a homeless man whose death was captured by police on an APD helmet camera. Police claim that Boyd was armed with two knives and illegally camping when they fired flash bangs at him, then used lethal force.

The APD said that the officers involved in the shooting -- Keith Sandy and Dominique Perez -- were both on leave pending an investigation. However, protestors told KOAT that they didn't trust the internal police investigation.

"You're asking police to police more police, and I think that's just asking for corruption," one protester said.

The Department of Justice has been investigating the APD since 2010, during which time -- according to DOJ statistics -- the APD has been involved in 37 shootings, 23 of which were fatal.

“There has been excessive force lately—in the last couple of years and I think something has to be done,” protestor Justin Wagner told KOB. “The new police chief is not doing his job. He spoke wrongly two weeks ago by justifying it, before everything was out there.”

Around 5 p.m., police officers demanded that the protestors remove themselves from the vicinity of APD headquarters, citing the fact that they failed to obtain a permit for the protest. A standoff between protestors and police in riot gear ensued. An Associated Press reporter claimed he saw gas canisters being thrown by APD officers.

Eventually, the protestors relented, and moved their protest to the northbound lanes of Interstate 25 around 7 p.m.

After being removed from the interstate, the protestors began to march toward the University of New Mexico campus, where around 9 p.m. they were met with more police in tactical gear and were again bombarded by what appeared to be canisters of tear gas. The protest finally broke up around 12:30 a.m. this morning.

Acting Mayor Richard Berry said he was proud of how his police force handled the protest.

"APD has done an exceptional job this afternoon of deescalating situations when we have protesters who obviously are in a situation where they want to escalate the situation on numerous occasions," he said.

"We want people to be able to protest, obviously they have their First Amendment rights to do that, but what it appears what we have on our hands now is a smaller group of individuals who's main goal is not to protest but to put the public and themselves in danger."

Watch a report from KOB below.