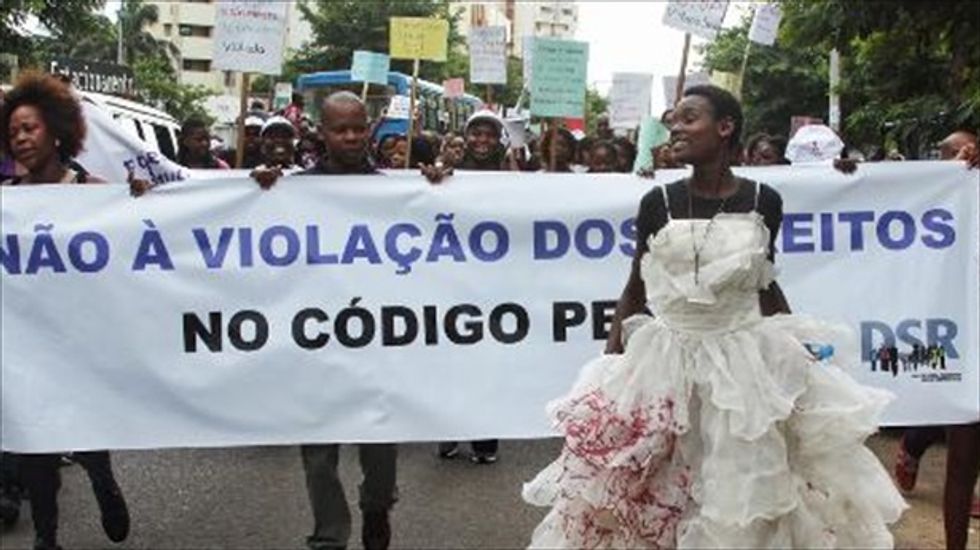 A young woman wears a blood-stained wedding dress as she protests a law allowing convicted rapists to be freed from prosecution if they marry the victim on March 20, 2014 [AFP]

Rights activists in Mozambique Thursday marched through the capital Maputo to protest a colonial era law still included in new legislation that allows rapists to go unpunished if they marry their victims.

The "marriage effect" clause sees convicted rapists slapped with a five-year suspended sentence if they marry their victims. It stipulates that the perpetrator should stay married to the victim for at least five years.

Though it had fallen into disuse, the clause has been retained in a new legislation replacing the colonial Portuguese penal code of 1886, which is currently before parliament.

But activists are outraged, in a country where women make up 40 percent of parliament.

International rights group Amnesty International has launched a campaign against the controversial legislation. It leads similar campaigns in Algeria and Tunisia where such laws also exist.

At the protest, a young woman dressed in a blood-spattered wedding gown led a group of about 300 mostly female protesters as they marched to parliament.

"It is an attack on us as women," protester Aulzira Camacho told AFP.

"Marry the rapist? No!" read a banner carried by another protester.

The new penal code was rushed through parliament in December, where it was approved in a preliminary vote.

It is now under discussion by special parliamentary groups before going back to the assembly for a final vote.

The draft code also terms rape in marriage as adultery rather than an offence.

Activists in the southern African country reject the text, where 12 percent of women fall victim to sexual abuse, according to 2011 health statistics.

"The penal code under discussion in parliament gravely violates the principles of human rights," Terezinha da Silva from the Women and Law in Southern Africa group said earlier this week.

"We now find four or five-year old children being raped on a daily basis...either by parents or neighbours or other people," she told AFP Thursday.

Lawmaker Ernesto Lapapa, the vice president of the human rights and legality commission, told AFP that deputies canvassed diverse opinions when drawing up the legislation, and protection of family honour came out as an important factor.

"Premature marriage is normal in Mozambique," Lapapa said adding, "if someone is involved with a child, their family obliges them to get married."

Activists in Mozambique are also fighting to change the way rape is defined under the new code, which classifies only vaginal penetration under the crime.