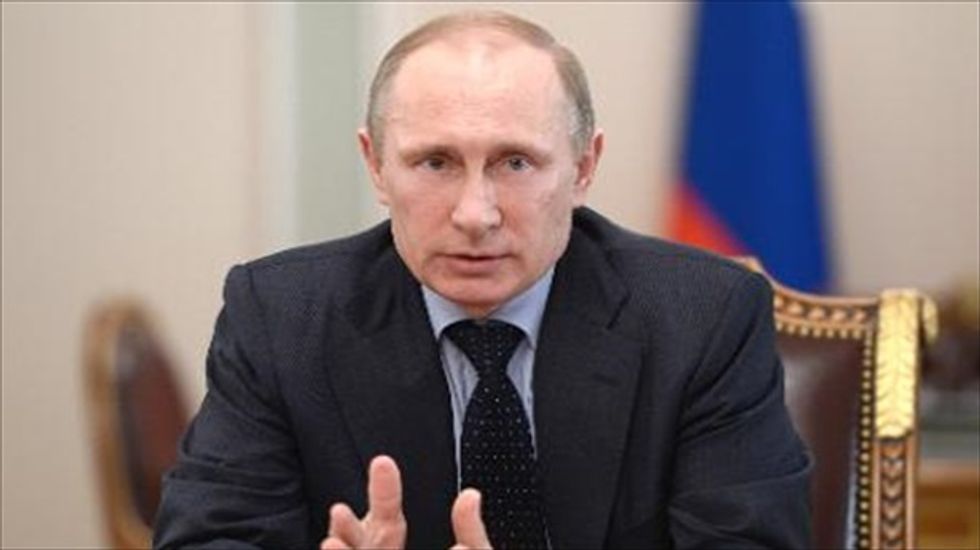 Russia's President Vladimir Putin speaks at a Security Council meeting at the Kremlin, on March 28, 2014 [AFP]

Russian President Vladimir Putin called his American counterpart Barack Obama to discuss a US proposal for a diplomatic end to the Ukraine crisis on Friday while insisting to the United Nations that Moscow had "no intention" of further military action.

The White House said in a statement Putin phoned Obama following a proposal presented to Russian Foreign Minister Sergei Lavrov by US Secretary of State John Kerry in The Hague earlier this week.

Obama and Putin had agreed that Kerry and Lavrov would meet to "discuss next steps" following the US initiative.

The details of the US proposal were not disclosed, but the White House statement said Obama had reiterated his determination to seek a diplomatic solution to the crisis.

"President Obama made clear that this remains possible only if Russia pulls back its troops and does not take any steps to further violate Ukraine’s territorial integrity and sovereignty," the statement said.

Russia's annexation of the Ukrainian region of Crimea has redrawn the map of Europe and reopened the Cold War's East-West split.

The diplomatic standoff has forced NATO to reinforce positions along Russia's frontier in a bid to calm ex-Soviet satellite nations about the Kremlin's new expansionist mood.

Putin on Friday for the first time confirmed that his forces were directly involved in Crimea -- the initial step of what the new pro-Western leaders in Kiev fear is a plan to annex an even greater part of Ukraine.

However United Nations Secretary General Ban Ki-moon said Friday that Putin had assured him Russia was not planning further military action in the region.

Ban said Putin told him "he had no intention to make any military move".

Putin, however, did "express his concern about some extreme radical elements and any such movement along the border lines," Ban said.

Obama told the US broadcaster CBS earlier there was clear evidence of a Russian troop buildup on the Ukrainian border.

A top security official in Kiev this week estimated there were now 100,000 Russian soldiers positioned around Ukraine -- a figure neither confirmed nor denied by Moscow.

Obama said the Russian military buildup "may simply be an effort to intimidate Ukraine or it may be that they have got additional plans."

Putin has taken quick steps to annex Crimea -- a move declared illegitimate by a non-binding UN General Assembly referendum on Thursday that highlighted Russia's growing isolation on the global stage.

The head of the FSB (ex-KGB) security service added to the nationalist fervour by reporting to Putin about his decision to fight back against "a growing foreign threat" to Russia by deploying "offensive counterintelligence and reconnaissance measures" against the West.

The Kremlin chief -- more popular at home now than at any point since his 2012 election to a third term -- approved of the decision in nationally televised news footage that also showed him congratulating the troops involved in the Crimea swoop.

"The recent events in Crimea... demonstrated the new capacities of our armed forces," Putin said.

The seemingly offhand remark carried great weight because Putin had previously insisted that only "local self-defence forces" were involved in the rapid succession of raids on Ukraine's army and naval installations.

The interim leaders in Kiev have been trying to pull Ukraine out of its worst post-Soviet crisis by securing a Western economic rescue package and setting the stage for snap polls on May 25 that could unite the culturally splintered nation behind one democratically elected leader.

They managed in the first task on Thursday by winning an IMF-backed pledge of $27 billion in international aid over the next two years.

The race to succeed ousted president Viktor Yanukovych meanwhile heated up with the entry of his arch-rival Yulia Tymoshenko into a crowded field of contenders ready to tighten Kiev's embrace of the West.

Tymoshenko's reemergence encapsulates the spectacular scale of change that has swept over the nation since it was first hit by waves of deadly pro-Europe protests four months ago.

The 53-year-old was released from a disputed jail sentence within hours of parliament's decision to strip Yanukovych of power on February 22.

Yanukovych has turned for many into a symbol of the cronyism and corruption that has kept Ukraine from enjoying the growth and living standards of other Eastern European states that fell under Kremlin rule after World War II.

The deposed leader added fuel to the election-day fire by calling on Friday for every region to hold its own sovereignty referendum following the Kremlin's annexation of Ukraine's Russian-majority Crimean peninsula.

But Yanukovych's impact on Ukrainian voters appears to have diminished beyond repair since his flight to Russia and he will play no part in the presidential vote itself.

But Tymoshenko will also have ground to make up. An opinion poll published by four respected Ukrainian research firms this week put her in third place with about eight percent of the prospective vote.

Chocolate baron Petro Poroshenko -- the only prominent Ukrainian tycoon to join protesters at the Kiev barricades -- ranked first with the backing of almost a quarter of the respondents.

Some analysts believe that the towering sports star may try to become the mayor of Kiev and give his ally Poroshenko a clearer shot at the presidency.