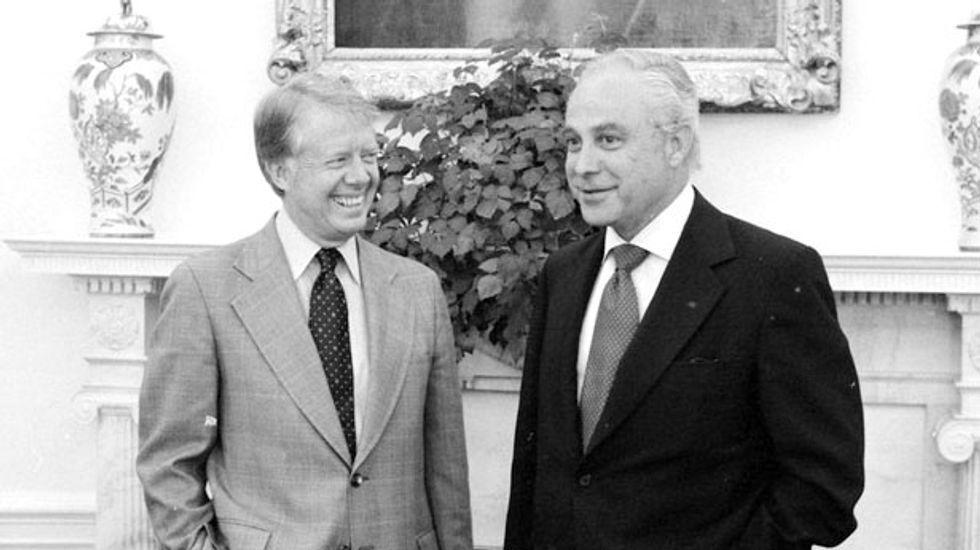 Robert Strauss, a Washington insider and lobbyist who led the Democratic Party and advised presidents, died Wednesday. He was 95.

"To US leaders, he was a trusted counselor and an honest broker. And to those across the aisle or the table, he was a man of integrity who always sought common ground," it added.

"His wisdom, judgment and foresight were matched only by his sense of humanity, and we are as diminished by his loss as we were enriched by his life."

President Ronald Reagan had sought Strauss's advice when his administration got caught up in the Iran-Contra affair that saw senior administration officials secretly carry out arms sales to Iran during an arms embargo and funnel proceeds to buy weapons for US-backed rebels in Nicaragua.

A "deeply saddened" Nancy Reagan recalled that Strauss was one of the first people she and the late Republican president had met when they first arrived in Washington more than three decades ago.

"People ask me how I could be acquainted with him since he was such a staunch Democrat," Reagan recalled in a statement.

She said Strauss "served this country with great distinction. He will leave a huge void in our nation's capital and I will miss him dearly."

In 1991, president George H.W. Bush, also a Republican, picked the Democratic confidant to serve as US ambassador to the Soviet Union as the communist country crumbled.

Following the collapse of the USSR that year, Strauss served as US ambassador to Russia.

"Bob Strauss may have cut his teeth in the brass knuckle and highly partisan political fields of Texas politics, but he counseled several presidents of the United States of both parties -- and like the others, I valued his advice highly," said Bush, a fellow Texan.

President Barack Obama praised Strauss as "truly one of a kind."

"Bob was one of the greatest leaders the Democratic Party ever had, yet presidents of both parties relied on his advice, his instincts and his passion for public service -- not to mention his well-honed sense of humor," Obama added.

Strauss was known for his ability to get thorny tasks done, which he once called "the art of making things happen instead of just tilting at windmills," according to a biography by Kathryn McGarr.

On his desk, he had a little sign in gold lettering that read: "It CAN be done."

Raised in the small West Texas town of Stamford, Strauss had served as an FBI special agent after earning his law degree from the University of Texas.

He entered law practice in 1945 and the firm that became Akin, Gump, Strauss, Hauer & Feld and now has 20 offices around the globe.

Chairman of the Democratic National Committee from 1973 to 1976, he also chaired Jimmy Carter's presidential election campaigns in 1976 and 1980.

Strauss served as special trade representative under Carter, successfully concluding the Tokyo Round of multilateral trade negotiations and guiding its passage through Congress, culminating in the Trade Act of 1979.

Carter then asked Strauss to serve as his personal representative to Middle East peace talks.

In 1981, Strauss was awarded the Presidential Medal of Freedom, the US government's highest civilian award.