Researchers: 'Polar bear lizard' was like a terrifying pint-sized T-Rex 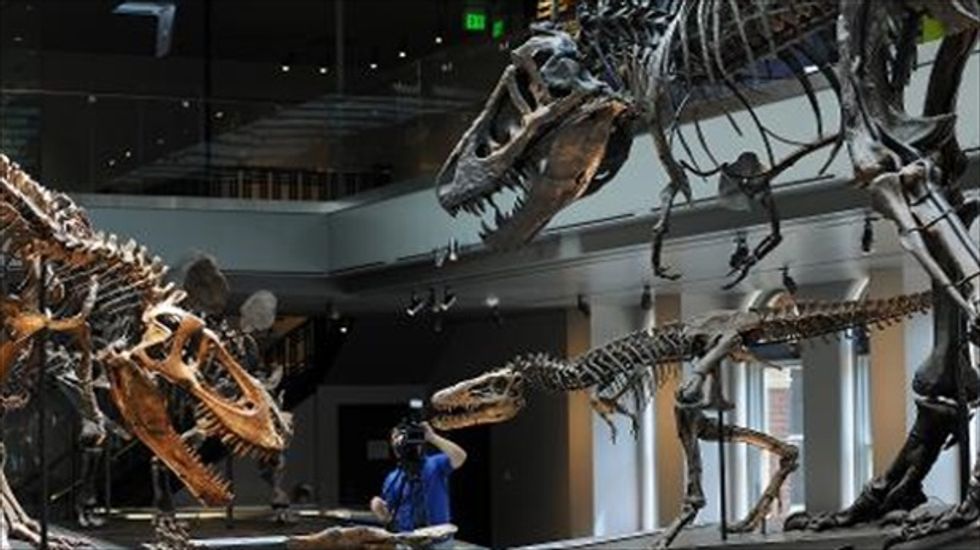 A Tyrannosaurus rex 'Growth Series' with a juvenile, baby, and young adult fossils, at the Natural History Museum of Los Angeles on July 7, 2011 [AFP]

A pint-sized tyrannosaur braved the frigid Arctic and feasted on fellow dinosaurs 70 million years ago, according to a report Wednesday on a new species identified from fossilized skull bones in Alaska.

Scientists have crowned the fierce creature the "polar bear lizard," or Nanuqsaurus hoglundi, and they say it stood as tall as a modern man but was half the size of its very close cousin, T. rex, the "lizard king."

An analysis of several skull bones and teeth are described in the journal PLoS ONE by Anthony Fiorillo and Ronald Tykoski of the Perot Museum of Nature and Science in Texas.

Roving across land that was dark for half the year and prone to rainy, snowy and frigid spells, the miniature tyrannosaur likely had a strong sense of smell and may also have had sharp vision to hunt prey at night.

It was also just as big as another common meat-eating dinosaur found in Alaska, the Troodon, Fiorillo told AFP.

"To us that is a really cool thing because it is telling us, we think, that there is something about the Arctic environment of 70 million years ago that selected for an optimal body size for a successful predator."

The bones were found on a bluff above the Colville River in northern Alaska.

Remains of the much larger T. rex have typically been found further south, scattered across the western United States where the climate would have been warmer.

The area inside the Arctic Circle where the dinosaur bones were found was not as cold 70 million years ago, and was probably on par with modern day Seattle, Washington, or Calgary, Canada.

The tyrannosaur's skull fragments were found in a hole along with a horned dinosaur it likely killed and tried to eat, based on the tooth-size gashes in the plant-eater's bones, researchers said.

At the time of publication, researchers had four bone pieces, some of which were crucial because they showed the head growth of an adult, rather than a juvenile, and allowed scientists to estimate the overall skull size.

Since then, more fragments have been unearthed, Fiorillo said.

"We have a pretty complete picture of the skull roof now. The beauty of that is that the sediment that filled it in preserves the shape of the brain and we can see that this animal also had a well developed sense of smell."

University of Chicago paleontologist Paul Sereno, who was not involved in the research, described the jaw and skull fragments as "pretty exciting."

When fossils of dinosaurs were first found in the Arctic three decades ago, they were initially mistaken for whale bones.

Early on, some experts believed the dinosaurs may have migrated, or that juveniles would have been unable to survive there, but more recent discoveries have debunked those ideas.

"We couldn't get ourselves to believe that they lived up there in the darkness," Sereno told AFP, adding that recent discoveries have changed that way of thinking.

"They must have been managing somehow. We know that reindeer change their diet to eat all sorts of strange things."

The new species' name, Nanuqsaurus hoglundi, is a nod to the Inuit name for polar bear, Nanook, and the natural gas tycoon Forrest Hoglund who helped fund the Texas museum where Arctic dinosaur bones are displayed.