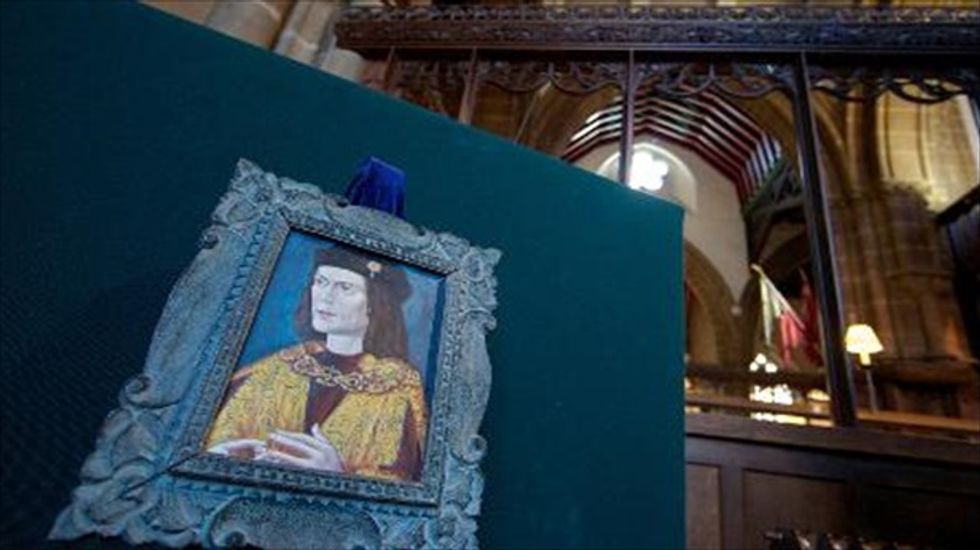 A painting of King Richard III is pictured in Leicester Cathedral in central England on Feb. 4, 2013 [AFP]

The final battle of British king Richard III, who died at war in 1485, began Thursday at London's High Court, which must decide where his remains will be laid to rest.

Distant relatives and supporters of the infamous ruler, whose body was found under a car park in Leicester, central England, in 2012, are fighting for his remains to be buried in York Minster, the city that gave its name to Richard's royal house.

The Plantagenet Alliance claim it was the wish "of the last medieval king of England" that he be interred in the historic northern England city.

But the archaeologists who made the astonishing discovery contest that his battle-scarred body should remain in Leicester, at the city's cathedral.

The scientists from the University of Leicester are backed by the Ministry of Justice and the local council, which hopes the monarch will help draw tourists to the central England city.

However, the king's supporter's club is prepared to call a truce if the three judges rule that Justice Secretary Chris Grayling sets up a wide-ranging public consultation exercise.

A third option would be to bury the king in London's Westminster Abbey.

Gerard Clarke, the Alliance's lawyer, on Thursday told the court that Queen Elizabeth II had remained "silent" on the issue.

This can be partly explained by the toxic legacy left by Richard, the Queen's 14th great-granduncle.

He reigned for only two years, but is remembered as a treacherous usurper and bloody tyrant, as immortalised by William Shakespeare.

The regal remains were discovered in August 2012 during the construction of a municipal car park.

DNA and battle wounds proved it was Richard, who was buried without ceremony after being killed at the Battle of Bosworth.

His death brought an end to the War of the Roses, the civil war between the families of Lancaster and York named after their respective heraldic symbols of the red and the white rose.

The hearing continues on Friday, much to the distaste of university representative Anya Proops, who called for an end to the "undignified squabble" over the remains.