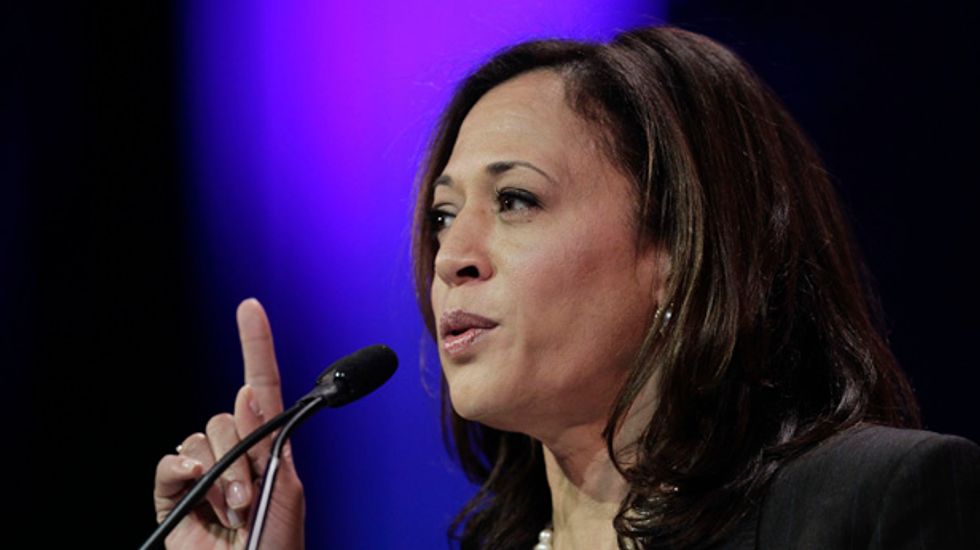 LOS ANGELES (Reuters) - California Attorney General Kamala Harris sought to engage and energize fellow Democrats on Saturday and warned them not to become complacent with their domination of state politics.

"There is a difference between having a dream and being asleep," said Harris, who was key in developing consumer protections for homeowners facing foreclosure in the wake of the mortgage meltdown.

"Let's not just be proud. Let's stay awake," she warned Democrats, whose party holds about two-thirds of seats in the state legislature as well as the posts of governor, lieutenant governor, secretary of state and attorney general.

Harris, who served as district attorney of San Francisco before being elected attorney general in 2010, is heading into her re-election bid with a $3 million war chest and little opposition.

Harris has avoided talking specifically about seeking higher office, but many in both parties have said they expect her to run for governor one day or seek a U.S. Senate seat.

In her speech, Harris signaled interests beyond the realm of attorney general, saying she toured drought-stricken regions to see the "bathtub rings ... where water used to be" in the state's reservoirs.

At the national level, Harris pointed to what she called "ominous signs" of ongoing threats to minority voting rights in the wake of last year's U.S. Supreme Court decision striking down a portion of the federal Voting Rights Act.

Harris was briefly the subject of controversy last year, when President Obama called her the "best-looking attorney general in the country," prompting a flurry of comment over whether the remark was sexist. Obama apologized.

Born to a pair of college professors, Harris grew up in the tumult of mid-1960s civil rights activism in the liberal university town of Berkeley.

She has won endorsements from a number of law enforcement groups that refused to back her when she beat former Los Angeles District Attorney Steve Cooley four years ago in a tight race.

At the convention, Harris reminded the crowd that she had performed the first same-sex marriage in the state after the U.S. Supreme Court struck down a voter-approved ballot initiative that had outlawed such unions.