Runoff presidential election in El Salvador ends in a near-tie 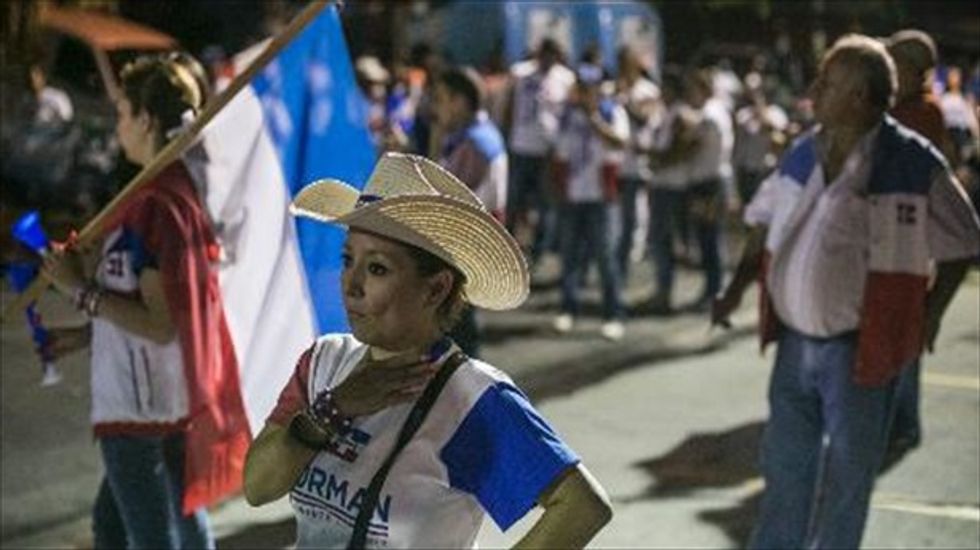 Supporters of Salvadorean presidential candidate for the National Republican Alliance party, Norman Quijano wait for the voting results during the presidential election run-off in San Salvador, on March 9, 2014 [AFP]

El Salvador's presidential runoff was hung up Monday in a near tie between an ex-guerrilla leader and an arch conservative mayor as tension mounted over who would be proclaimed the winner.

But the Supreme Electoral Tribunal said it would not call a winner until a manual count has been completed, possibly not before Wednesday.

"We are not going to permit fraud of the Chavista or Maduro type in Venezuela. This is El Salvador," said Quijano.

The FMLN and ARENA were the main protagonists of a bloody 1979-92 civil war, and the election results showed how divided the country remains more than two decades later.

"We won the first round and now we have triumphed again in the runoff," Sanchez Ceren told supporters amid an explosion of fireworks.

But his ARENA counterpart was convinced its side had won.

Quijano claimed victory in a speech to supporters, ominously warning that El Salvador's military was "aware of the fraud that is being perpetrated."

Sanchez Ceren had conciliatory words for his rival.

"We can say right now that you have the doors open to work with us to move El Salvador forward," he said.

Election officials, likely expecting that vote results will be challenged and there will be calls for a recount, urged both sides to wait for final results.

"This tribunal recommends and orders that no party declare itself winner given such close results," said Supreme Electoral Tribunal president Eugenio Chicas in a TV and radio message.

Sanchez Ceren, 69, is a former teacher and ex-education minister, who was one of five top guerrilla commanders during the civil war.

He served as vice president under Mauricio Funes, a former journalist and FMLN candidate whose election in 2009 ended two decades of conservative rule.

If his victory is confirmed, Sanchez Ceren would be the first former FMLN commander to become president.

Meanwhile Quijano, 67, the mayor of the capital city San Salvador, is a law and order candidate and staunch anti-communist who campaigned against the country's high crime rate and the notorious "mara" street gangs behind much of El Salvador's drug dealing and extortion.

Quijano, however, suffered from his links to ex-president Francisco Flores, a former campaign adviser, under scrutiny over $10 million donated by Taiwan that went missing during his 1999-2004 government.

After the civil war, El Salvador found itself facing violence from the street gangs, which control whole neighborhoods and run drug distribution and extortion rackets.

Forty percent of El Salvador's six million people live in poverty, and the country relies heavily on remittances sent by Salvadorans living abroad -- around $4 billion a year, or 16 percent of the country's GDP.