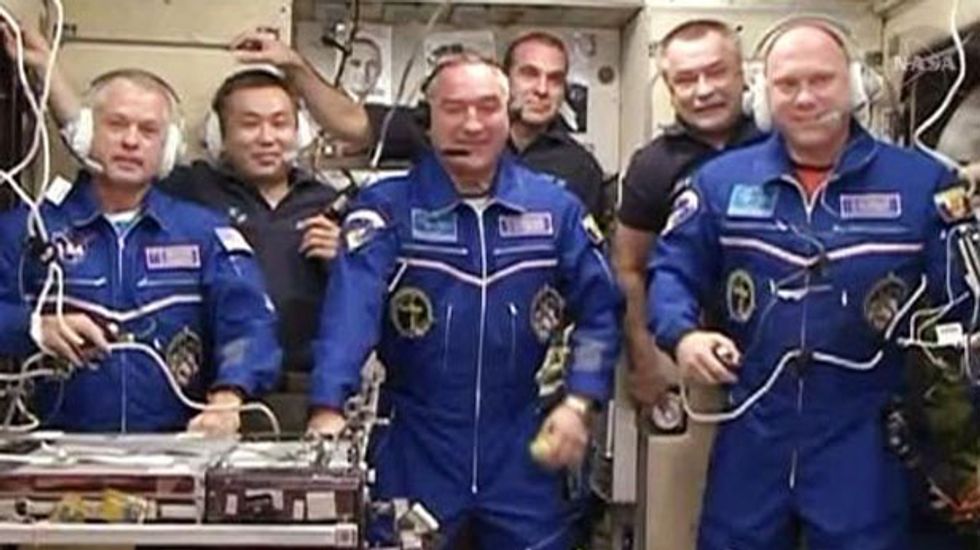 A Russian spacecraft with two Russians and a NASA astronaut aboard on Friday docked successfully at the International Space Station after a technical hitch caused an unprecedented two-day delay.

Skvortsov was first to open the hatch into the ISS around 7:00 am Moscow time (0300 GMT), hugging the crewmembers already on board and grinning broadly.

"That was fun... It's a lot more spacious in here," Skvortsov said in a video link-up from the ISS.

The trio were originally to have docked with the ISS early Wednesday, just six hours after launch from Kazakhstan, but their Soyuz spacecraft suffered a technical glitch on its approach in orbit.

They had to orbit the Earth 34 times before their rendezvous with the international space laboratory, instead of the fast-track route of four orbits originally envisaged.

"It was a long two days but we made it. Glad to be here," Swanson said on a video link-up from the ISS.

The issue arose once their Soyuz capsule was in orbit and a thruster failed to fire to assist its approach for docking with the ISS.

US space agency NASA said in a statement that the Soyuz spacecraft "was unable to complete its third thruster burn to fine-tune its approach" to the ISS.

The Soyuz capsule later carried out three manoeuvres in orbit bringing it on the correct trajectory.

The head of the Russian state firm Energia that supplies the Soyuz rocket that propels the craft into space said Wednesday that the origin of the problem was not yet clear.

"It could be mathematics, it could be a transmitter problem or that the engine choked. But most likely it was a mathematical problem," said Vitaly Lopota, quoted by the Interfax news agency.

This would imply that ground scientists failed to work out the correct altitude in orbit for the thruster to fire to take the Soyuz to the ISS.

A commission has been formed to pinpoint the cause of the problem.

The flight director for the Russian section of the ISS, Vladimir Solovyov, vowed Friday that Russia would continue to use the fast-track route to the ISS that it began using last year.

"We will continue to work according to this scheme. You can't scare us off with just this one thing," he said, cited by the ITAR-TASS news agency.

Mission control "at a certain moment did not receive the necesary orientation" from the Soyuz, he said.

"This was the rarest combination of circumstances," Solovyov said, while adding the Soyuz's onboard computers may be updated as a precaution.

"Maybe for such an unlikely case, we will put something extra into the memory of the onboard computer -- just in case."

After the retirement of the US shuttle, NASA is for now wholly reliant on Russia for delivering astronauts to the space station.

The trio bring the ISS crew up to six by joining incumbent crew Koichi Wakata of Japan, American Rick Mastracchio and Russian Mikhail Tyurin, who are due to leave in May.

Space officials have made clear that space cooperation will continue unaffected by the mounting diplomatic strains that have seen the US impose sanctions on Russian officials over Moscow's annexation of Crimea.

Skvortsov and Swanson said at a pre-flight news conference that they had decided to have dinners together on board the ISS "as an opportunity to come together as friends in the kitchen and look each other in the eye".

"I think we will all be able to live peacefully together," Skvortsov said.

47-year-old Skvortsov is making his second space flight and 53-year-old Swanson, a veteran of two past shuttle missions, his third.

43-year-old Artemyev meanwhile is on his first voyage to space. He took part in a 2009 experiment where volunteers were shut up in a capsule at a Moscow laboratory for 105 days to simulate the effects of a possible voyage to Mars.