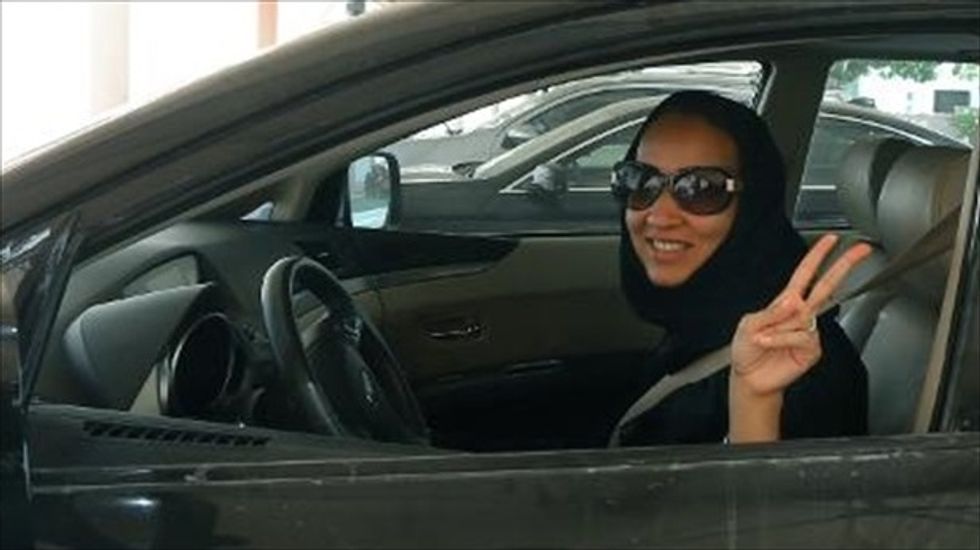 Saudi activist Manal Al Sharif flashes the sign for victory as she drives her car in Dubai on Oc. 22, 2013 [AFP]

Saudi activists have urged women to defy a traditional driving ban and get behind the wheel on Saturday, the second day of a visit by U.S. President Barack Obama.

"We have fixed a day every month to pursue our campaign," activist Madiha al-Ajroush told AFP Friday, insisting that it was a coincidence their latest protest and Obama's visit came on the same day.

Saturday's action is part of a campaign launched on October 26, when 16 women activists were stopped by police for driving.

The campaign has gained momentum since 2011 despite activists being arrested for flouting the ban.

Before Obama arrived in Riyadh, dozens of US lawmakers urged him to publicly address Saudi Arabia's "systematic human rights violations", including the ban on women drivers.

Rights group Amnesty International also urged Obama to take a strong stance on the issue by appointing a woman chauffeur while in Riyadh, and to meet activists.

"As well as appointing a woman driver during his visit, President Obama should try to meet Saudi women who have defied the driving ban," said Hassiba Hadj Sahraoui, Amnesty's deputy director for the Middle East and North Africa.

Amnesty asked Obama to "raise the plight of women" in the kingdom, pointing out that in addition to not being able to drive, they continue to face "entrenched discrimination" on many levels.

"Under its restrictive guardianship system, women need the permission of a male guardian to get married, travel, undergo certain types of surgery, accept paid employment or enrol in higher education," it said in a statement on Friday.