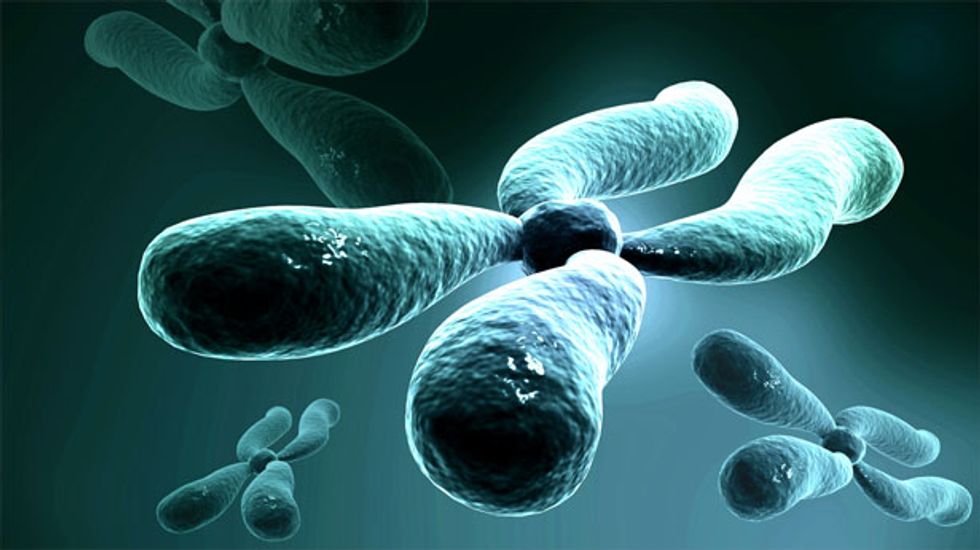 ["Digital Illustration Of Chromosome In Colour Background" on Shutterstock]

Scientists have created the first man-made chromosome for a complex-celled organism -- a feat hailed Friday as a big step towards acquiring the controversial ability to redesign plants or animals.

A synthetic chromosome was inserted into a brewer's yeast cell, which functioned as normal -- the key test of success, the international team reported in the journal Science.

"Our research moves the needle in synthetic biology from theory to reality," said Jef Boeke, director of the New York University's Institute for Systems Genetics, who was a member of the research team.

Yeast is a closely-studied representative of the group of eukaryotes, organisms with complex cells that contain a nucleus and other structures enclosed within membranes.

All plants and animals, including humans, have eukaryotic cells.

Chromosomes have previously been synthesised for bacteria, which are simpler, prokaryotic organisms.

Yeast is used to make beer, biofuel and medicines, and researchers believe it can be made to work more efficiently with genetic modifications.

Boeke and his team unravelled the coding of one of yeast's 16 chromosomes, then used software to make changes to it -- removing repetitive and less-used regions.

They then built a synthetic version of this altered chromosome from scratch, stringing together individual nucleotides -- the chemical building blocks of the genes that make up chromosomes, which in turn comprise the genome.

"It is the most extensively altered chromosome ever built," said Boeke.

"We have made over 50,000 changes to the DNA code in the chromosome and our yeast is still alive. That is remarkable."

Yeast shares about a third of its 6,000 genes -- units of the chromosome that carry the instructions for cell function -- with humans.

"Their effort represents a critical step on the road to building an entire eukaryotic genome," said a media summary from Science. "It could also help researchers learn more about genome biology -- including how genomes are built, how they're organised, and what makes them work."

Boeke and his team are already working on synthesising other yeast chromosomes.

This, they wrote, "represents a major step towards the design and complete synthesis" of a eukaryotic genome.

"Rapid advances in synthetic biology coupled with ever decreasing costs of DNA synthesis suggest that it will soon become feasible to engineer new eukaryotic genomes, including plant and animal genomes with synthetic chromosomes encoding desired functions and... properties based on specific design principles."

Greenpeace scientist Janet Cotter told AFP that genetically modified organisms could be useful, in drug development for instance, but in controlled conditions.

"In contained use, on a small scale in a lab, it's absolutely fine. In a commercial situation, on a scale say for biofuels, then you run into problems about how you adequately and securely contain those organisms."

["Digital Illustration Of Chromosome In Colour Background" on Shutterstock]