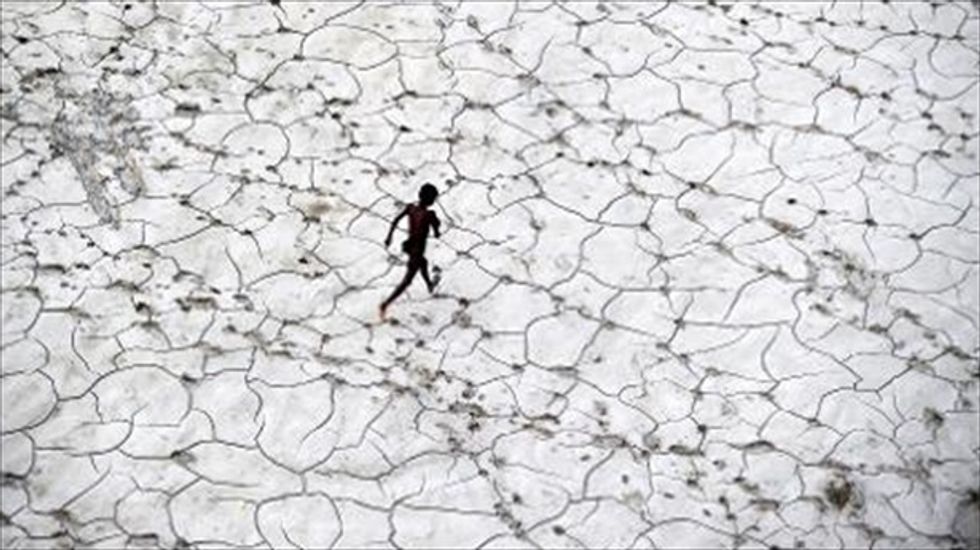 An Indian street child playing in a dry river bed after flood waters receded in Allahabad on Oct. 25, 2013 [AFP]

International scientists will gather near Tokyo on Tuesday for a week-long meeting centred on a grim climate change report that warned of floods and drought that would stoke conflicts and wreak havoc on the global economy.

A draft of their report, seen by AFP, is part of a massive overview by the Intergovernmental Panel on Climate Change (IPCC), likely to shape policies and climate talks for years to come.

Scientists and government representatives are meeting in Yokohama, south of Tokyo, from Tuesday to exchange ideas and release a full report at the end of the conference on March 31.

"We have a lot clearer picture of impacts and their consequences... including the implications for security," said Chris Field of the United States' Carnegie Institution, who headed the probe.

The work comes six months after the first volume in the long-awaited Fifth Assessment Report declared scientists were more certain than ever that humans caused global warming.

Rising greenhouse-gas emissions will "significantly" boost the risk of floods, with Europe and Asia particularly exposed, the draft says.

Temperature increase was also leading to decline of renewable water resources, while the rising sea level was seen to displace "hundreds of millions" of coastal dwellers by 2100, according to the draft report.

Average yields of wheat, rice and corn were seen to fall, while demand for crops will likely rise sharply due to expanding population.

Poverty, migration and hunger are invisible drivers of turbulence and war, as they sharpen competition for dwindling resources, the report warns.

By reducing carbon emissions "over the next few decades", the world can stave off many of the worst climate consequences by century's end, says the report.

The panel has issued four previous "assessment reports" in its quarter-century history.

The Yokohama volume goes further than its predecessors in forecasting regional impacts in greater detail and emphasising the risk of conflict and rising seas.

The IPCC's last big report in 2007 helped unleash political momentum leading to the 2009 UN climate summit in Copenhagen. But its reputation was dented by several mistakes, seized upon by climate sceptics as proof of bias.

The United States recently passed yet another grim milestone in the 2020/2021 pandemic when Johns Hopkins University in Baltimore reported that the COVID-19 death count had passed 600,000 in the United States. Nonetheless, there is reason for optimism where the pandemic is concerned. Around 65% of U.S. adults, according to the New York Times, have been at least partially vaccinated for COVID-19, and President Joe Biden — who has been promoting vaccination aggressively — hopes to get that number up to 70% by July 4. Biden obviously takes the pandemic much more than former President Donald Trump, who repeatedly downplayed its severity in 2020.

Trump's dysfunctional response to the worst global health crisis in more than 100 years is the focus of a new book by Washington Port reporters Yasmeen Abutaleb and Damian Paletta: "Nightmare Scenario: Inside the Trump Administration's Response to the Pandemic That Changed History," which Post reporter Dan Diamond discusses in detail in an article published on June 21. Here are five bombshells in the book, according to Diamond.