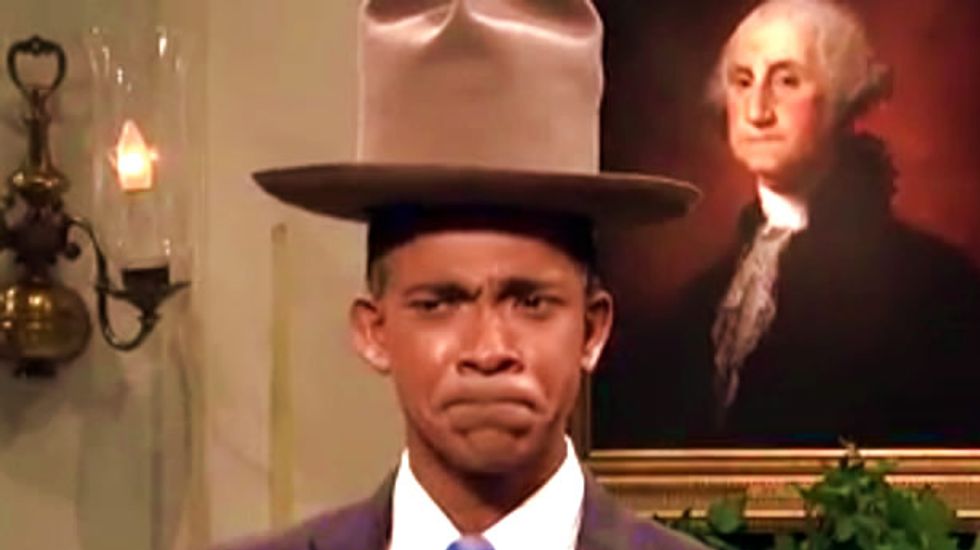 The opening skit of this week's episode of Saturday Night Night lampooned the Obama Administration's last-minute efforts to get young people to sign up for Obamacare.

The skit begins with "President Obama," played by Jay Pharoah, praising the effort of his social media guru to get him on comedian Zach Galifianakis's Between Two Ferns web series.

His social media guru first suggests that he post a picture of himself on Instagram wearing hip-hop artist and producer's tall hat from the Grammy Awards last month.

When "Obama" expresses reservations about posting the photograph, his adviser Mike reminds him that he "was the one who wanted to do this," and "Obama" reluctantly agrees to allow it to be posted.

The social media guru then suggests "Obama" remake the most retweeted image of all time -- Ellen DeGeneres's Oscar night "selfie" -- with a Kardashian, Bat-kid, one of the singers of the band One Direction and a cat dressed up like a character from the movie Frozen. After the image is taken, "Obama" against voices concerns about its propriety, saying "isn't it a little silly?"

His adviser, Mike, replies, "you know what's silly? Right now there's a pregnant woman in Denver who has no health insurance -- that, is silly."

Again, Obama, reluctantly agrees to have the image posted. After making a Vine video with Pope Francis, "Obama" again expresses his concerns about the appropriateness of posting it on the Internet.

His adviser, Mike, responds that "there's a child in Little Rock, and he wants to see a day where everyone has affordable health insurance. But he can't, and you know why? Because he was born without eyes."

From that point on, the social media exercises and the excuses Mike gives to post them only become more and more absurd.

You can watch the entire skit from the March 29, 2014 episode of Saturday Night Live below.