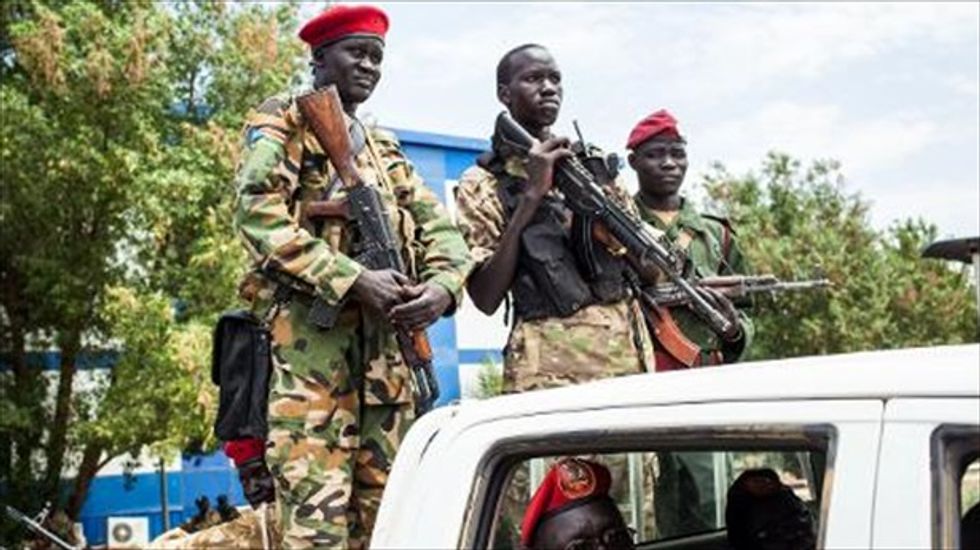 South Sudanese army soldiers stand guard in a pick-up truck as they wait for the visit of South Sudan's Petrolium Minister in Paloch, on March 2, 2014 [AFP]

South Sudan's army has intercepted weapons from a UN peacekeeping mission, a military spokesman said Friday, raising tensions between the government and international agencies as violence continued in the world's newest nation.

"This is claimed to be a UN shipment with weapons, blankets and army uniforms on the way from Rumbek to Bentiu," an army official said in a text message accompanied by photos of the seized consignment.

The United Nations Mission in South Sudan (UNMISS) is supposed to carry weapons for its contingent by air, not by the road.

UNMISS spokesperson Ariane Quentier admitted the arms shipment was a "regrettable error" and pledged an investigation would be carried out.

"Several containers were labelled wrongly and inadvertently contained weapons and ammunitions. This is regrettable," said Quentier in a press statement.

UNMISS is trying to contain violence that broke out on December 15, when a clash between troops loyal to President Salva Kiir and those backing sacked vice president Riek Machar snowballed into full-scale fighting across the country.

"We don’t know whether these weapons are connected to the rebel activities in the country or not. So, we shall go there and check the documents and it is from there that we shall respond to what UN is saying," he said.

The interception risks increasing the tensions between Kiir's government in Juba and UNMISS, which has been critical of both sides in the conflict.

Bentiu, where the weapons were headed, has been a key site of fighting.

The incident came as the UN's World Food Programme said on Friday that it was planning to airlift and airdrop urgently needed food aid to thousands of refugees and others affected by the fighting.

The WFP said the conflict had severely complicated supplying refugee camps in the northeastern Maban County, warning that cereal stocks there were exhausted.

"Because our normal supply routes are disrupted, WFP will be using a combination of airlifts and airdrops to replenish the stocks in the Maban County refugee camps," the WFP said.

The UN food agency said so far this year it had dispatched a total of 20,296 metric tonnes of food around South Sudan "despite immense challenges due to insecurity, including looting and commandeering of trucks".

The government has been angry about UN criticism of its actions during the conflict. In January, Kiir accused the UN of trying to establish a "parallel government" in the country.

UNMISS countered that its civilian refugee camps have come under pressure from both sides, raising particular concerns after government forces tried to enter one of their bases by force to look for suspected rebels.

Thousands have been killed and 900,000 displaced in the conflict.