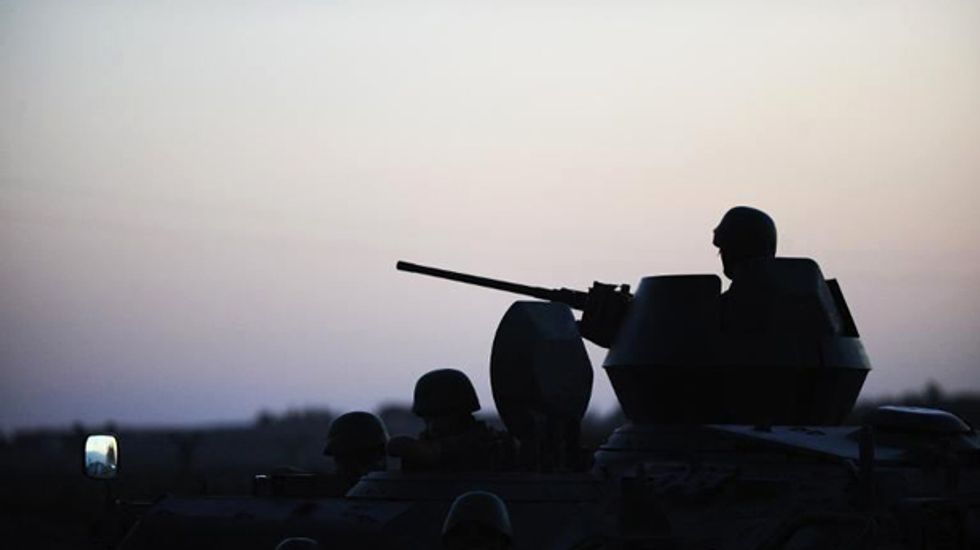 Syria accused Ankara of "flagrant aggression" Sunday after Turkey shot down a warplane near the border, raising tensions as Syrian loyalists and rebels battled for control of a frontier crossing.

Turkey, which backs the uprising against President Bashar al-Assad, warned Damascus against testing its determination and pledged a tough response if Syrian warplanes violate its airspace again.

It was the most serious incident since Turkish warplanes last September downed a Syrian helicopter that Ankara said was two kilometres (more than a mile) inside its airspace.

A Syrian military source said Turkey shot down the warplane "in a flagrant act of aggression that is evidence of (Turkish Prime Minister Recep Tayyip) Erdogan's support for terrorist groups".

The aircraft "was chasing terrorist groups inside Syrian territory at Kasab", said the source, referring to the disputed border crossing. The pilot was able to eject.

Since Friday, Syrian troops and rebels have been fighting for control of Kasab border post in the northwestern province of Latakia, a regime stronghold.

The battle erupted after three jihadist groups, including Al-Qaeda's Syrian affiliate Al-Nusra Front, announced the launch of an offensive Tuesday in Latakia dubbed "Anfal", or "spoils of war".

Erdogan and Turkish President Abdullah Gul praised Turkey's military for downing the warplane while the foreign ministry warned Damascus "not to test the determination of the Turkish armed forces".

Ankara has notified the United Nations and NATO, it said.

Defence Minister Ismet Yilmaz warned Turkey had the "strength" and "capacity" to protect its borders.

Erdogan also warned Syria against any response saying: "Our response will be heavy if you violate our airspace."

The Turkish military said two Syrian MIG-23 planes approaching its airspace were warned "four times" to turn away and that it scrambled fighter jets when one refused to do so and violated Turkish airspace.

A statement said an F-16 jet fired a missile at the Syrian plane which fell inside Syria.

Turkey toughened its rules of engagement after the downing of one of its warplanes by the Syrian air force in June 2012 and considers any military approach of its border from Syria a threat.

The Britain-based Syrian Observatory for Human Rights said the plane was bombing rebels fighting to seize Kasab when it was hit.

It said the rebels overran the crossing but were still battling loyalist forces in the area, while activists posted a video on YouTube showing jihadists from Ansar al-Sham flying a black flag over Kasab.

A Syrian military source denied the fall of Kasab, as a security source said the rebels had infiltrated from Turkey.

The battle for Kasab erupted Friday and at least 80 fighters on both sides have been killed.

Sunday's action prompted an angry response from the foreign ministry in Damascus which accused Turkey of "interference" in Kasab and siding with the rebels.

Turkey's "unjustified military aggression against Syrian sovereignty in the Kasab border region over the past two days proves its implication in the events in Syria", it said in a statement.

Turkey "must cease its aggression and support for terrorism", it said, but added Damascus "wants good bilateral relations" with Ankara.

According to the Observatory, which relies on a network of activists and medics on the ground for its reports, fighting in Latakia spread Saturday to a string of regime-held villages.

"Significant military reinforcements have been sent to the government forces," it said.

Latakia province, which includes Assad's family village, is considered a government stronghold, and many of its residents are from his Alawite minority.

Large parts of the province have remained relatively insulated from Syria's three-year conflict that has reportedly killed more than 146,000 people.

Turkey, which supports the rebellion against Assad's government and hosts more than 750,000 refugees, worries jihadists fighting in Syria could threaten its own security.

On Friday, Ankara warned it would retaliate "in kind" if jihadists in the northern province of Aleppo attacked the historic Tomb of Suleyman Shah, which is inside Syria but under Turkish jurisdiction.

And on Sunday, a gunman was killed and 13 were wounded in a firefight between pro- and anti-Damascus factions in Beirut, the latest spillover from the Syria war into Lebanon.