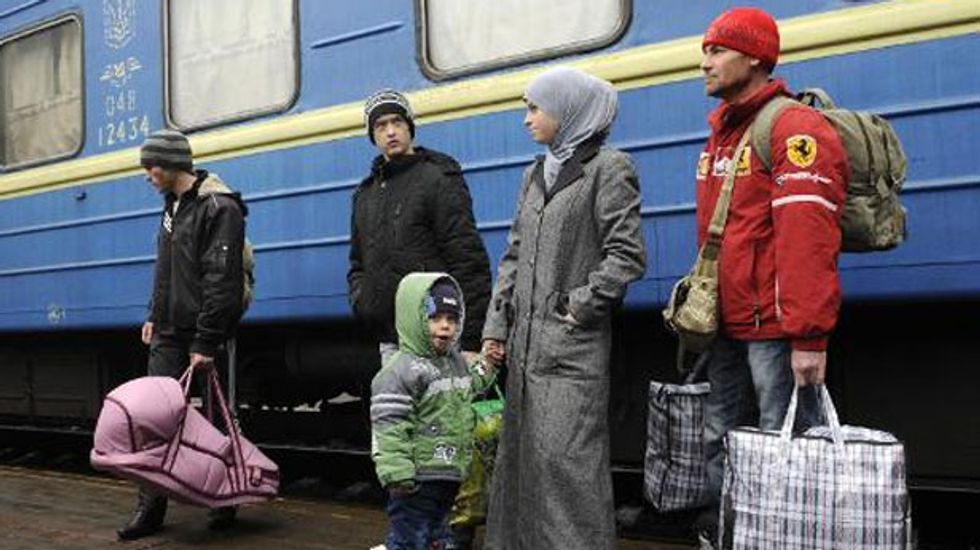 In the city of Lviv, across Ukraine from the crisis gripping Crimea, a group of Tatars fleeing the troubled peninsula disembarks on a train platform looking for security away from Russian forces.

"I'm scared for my children as long as Russian soldiers are in Crimea," said a young Tatar mother accompanied by her three children, aged two to five.

"Here I feel safe," she added, one of 200 Crimean residents who have accepted an invitation from Lviv authorities to come and stay in this bastion of Ukrainian nationalism in the west of the country near the Polish border.

Crimea, a Russian-speaking autonomous region of Ukraine, has come under the de facto control of Russian forces, and its regional parliament has unanimously voted to join Russia -- raising the spectre of the break-up of Ukraine.

Most of the Crimean residents now arriving in Lviv are Tatars, the peninsula's Muslim minority, which was deported to Siberia and central Asia under Soviet leader Joseph Stalin and returned after the fall of the Soviet Union in 1991.

For them, the creeping advance of Russian forces since late February has been especially alarming.

In Lviv, new arrivals were greeted by Petro Kolodiy, head of the regional council, which has set up a hotline for anyone wishing to relocate to the city.

"Like all Ukrainians, you are in a difficult situation created by the Kremlin. Lviv extends its hand to you," he told the newcomers.

Not only the authorities but the local population have opened their arms to 500 Crimeans, with hotel and spa owners even offering to host them for free.

"When I was little, my grandmother told me that Lviv had welcomed people from eastern Ukraine during the great famine (in 1932-1933) and shared their last piece of bread with them," said Kolodiy.

"Today, we're trying to offer the Crimeans what we can."

Besides Tatars, families of Ukrainian soldiers in Crimea are also arriving in Lviv.

A flag of the Ukrainian navy -- offered to Lviv's mayor by a reserve officer -- now flies above city hall as a sign of solidarity with Ukrainian soldiers.

Since the ousting of Ukraine's pro-Moscow president Viktor Yanukovych last month, Russian forces have surrounded several Ukrainian bases in Crimea, with skirmishes erupting in some spots.

Moscow has denied sending any troops to the disputed region but insists it will protect its citizens.

In a video message, Lviv Mayor Andriy Sadovy appealed to Crimeans not to believe Russian propaganda that said Moscow needed to defend its people on the peninsula against alleged western Ukrainian extremists.

"If you expect armed men from the west, I can reassure you: we want a peaceful development for all of Ukraine," he said, speaking in Russian, the better to reach Crimea's majority Russian-speaking population.

Ukraine is in effect divided between a mostly pro-Moscow east and a more pro-European west that includes Lviv and the capital Kiev.

Alim Aliyev, the Crimean Tatars' representative in Lviv, said he was optimistic about the region's future. Tatar men were sending their families away so they could dutifully defend their land, he said.

"As long as Tatars are in Crimea, Crimea will remain part of Ukraine," he said.

Tatars will launch a guerrilla war against the Russian forces if they do not pack up and leave the region, Aliyev warned.

"We will dance the haytarma and the hopak (traditional Tatar and Ukrainian folk dances) on the ruins of Putin's post-imperialist ambitions," he said.