The Arguments In Favor Of The Word "Bossy" Are Already Forming 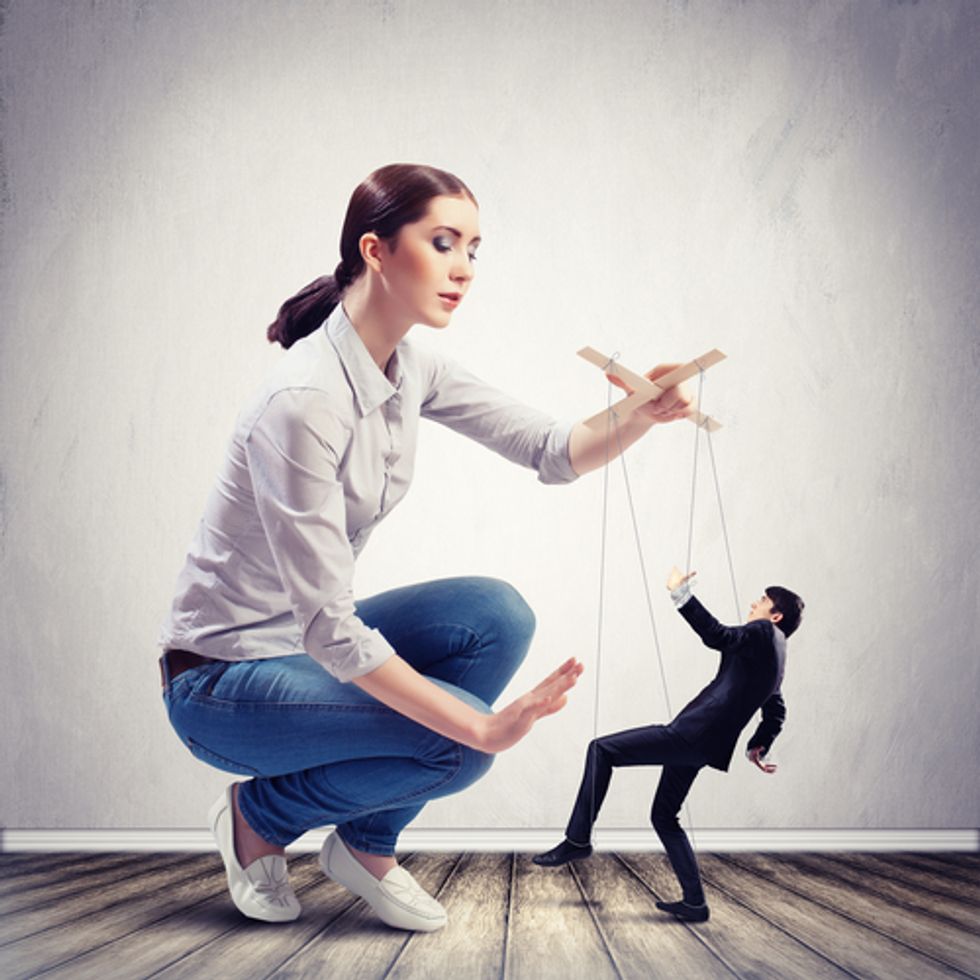 When I did a stock image search for "bossy", images of women dominating men were the major theme, also neatly disproving the claim that it's a gender-neutral word.

I usually just laugh at Roy Edroso's amusing mockeries of Jonah Goldberg and move on. Goldberg really is such a fatuous shitheel it's hard to take him very seriously and there are many hundreds of conservative bloviators who are more successful at framing disingenuous arguments so they take off amongst the crowds of conservative rationalizers, so I prefer to pay more attention to them. But this latest drop from the keyboard of Goldberg might be accidentally effective, if his readers can hold their attention long enough to get through it. (But first, please read Roy's hilarious take on it.) It's addressing Sheryl Sandberg's "Ban Bossy" campaign, and unsurprisingly, Goldberg is highly supportive of the continued use of a word that exists, like "bitch", largely as a way to police and shame female assertiveness. Indeed, "bossy" is a synonym for "bitch", I'd say. I'm not here to rehash the tired Sandberg debates (nor do I care to debate the bossy nature of the "Ban Bossy" campaign), but I think it's actually quite brilliant the way she and her people figured out that "bossy" is the training bra version of the word "bitch" or "bitchy". It's a way to call someone a "bitch" when she's still a little kid and using the harsher word seems unseemly.

Goldberg denies this, of course, saying it's "patently untrue" that "bossiness is a gender-specific issue for kids". This was an easy enough fact-check, as Katy Waldman found "bossy" is used four times as often to describe women as men in books. On the playground, where "bitch" is not an option, I'm guessing the ratio is stratospheric.

But that's typical Goldberg laziness. What made my skin crawl was he actually pulled a fairly nifty rhetorical stunt in tossing out a red herring I can sense conservatives in general will start to latch on to in order to defend this all-important child-synonym for "bitch" they can use to control and shame little girls.

Then there are the issues at the school level. Admittedly, I don’t send my daughter to public school in D.C. (because I live in D.C.), but to one of those hoity-toity schools that affluent liberals who oppose school choice send their kids to (for the record, we love our kid’s school). Most of my friends either send their kids to similar schools or, if they live outside the District, to good public schools in the D.C. suburbs. In short, these are the kinds of schools Sandberg probably sends her kids to. And the idea that the girls are being shunted or shortshrifted strikes me as just plain other-worldly. Don’t get me wrong, my kid has her complaints. For instance, she signed up for girls lacrosse and is miffed the boys get to “tackle” and the girls don’t.

This is a clever use of a strawman, because most people won't even notice that he was constructing a strawman. People hear the word "girls" and "leadership" put somewhere near each other and it's easy enough to convince them that the issue being debated is equal access to education. By pretending that the "Ban Bossy" campaign is about equal access to education, Goldberg can recite a few talking points about how girls have that now, so whatcha bitching about, bossy ladies?

But careful readers will notice that isn't what Sandberg is saying. At all! In fact, the "Ban Bossy" campaign only makes sense if you assume she's accepted that there's formal equal access to education. That's the point! Girls have equal access! They, which Goldberg whines about, even get better grades in school than boys. And yet, release them in the real world and they start falling behind. So clearly there's external factors that are causing girls who did well in school to fall behind in the workplace. We can debate what those are, though I think we can all agree that they're complicated. But Sandberg's argument is that one major factor is girls are socialized to be ashamed of themselves for assertive behavior or taking leadership roles. While you're in school and you're largely assessed on your ability to follow orders, girls do just fine. But when you're in the real world, where standing up for yourself is a critical skill for getting ahead, the gender that is told that they're emasculating and evil and bitchy and bossy for standing up for themselves is, understandably, going to fall behind as they try to avoid being slapped with those words.

All of which is to say Goldberg is pulling a bait-and-switch. Sandberg says girls struggle to stand up for themselves, and functionally, Goldberg is saying girls do just fine when it comes to taking orders, and that should be enough for you bossy feminists. But he employed enough hand-waving that I suspect this argument will be repeated ad nauseum by other wingnuts.

Now, again, you can argue with Sandberg on whether or not this is the primary issue or argue that her priorities aren't straight or whether or not this is the right approach or if it feels too bossy. Have at those debates! Knock yourself out. But it's objectively true that "bossy" is a word used to police female assertiveness and it's objectively true that it's effective in that task. Indeed, that's why you could have guessed with 100% certainty that conservatives would get their back up against the wall about this, because being able to police female assertiveness is important to them. I suspect, strongly, that Goldberg's strategy---subtly change the topic to imply that since girls are good at taking orders, we shouldn't complain if they fall behind in asserting themselves---is going to become a popular, probably the popular strategy in pushing back. Something to keep an eye out for.