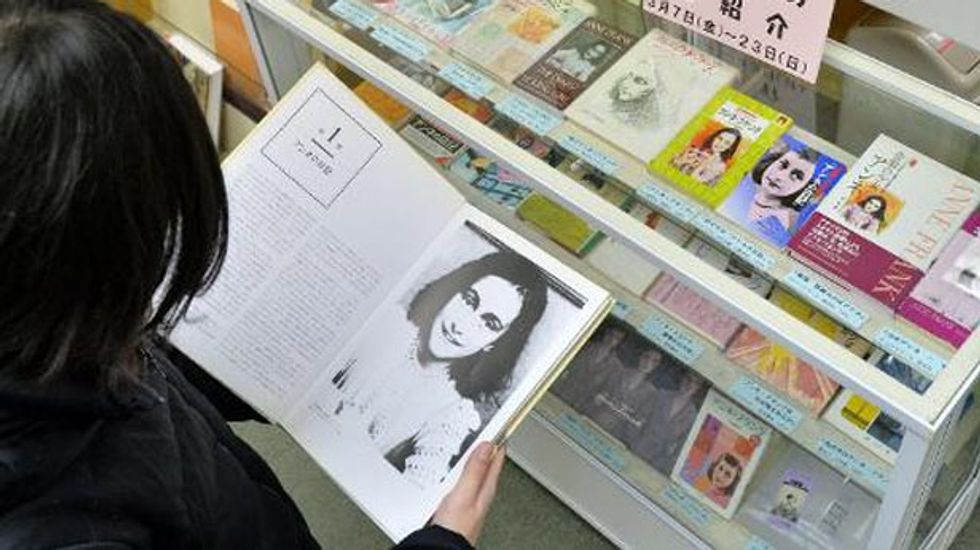 A man was arrested Friday for vandalising copies of Anne Frank's "The Diary of a Young Girl" in Tokyo libraries, police said, in a case that has sparked alarm over a rightward shift in Japanese politics.

More than 300 copies of the diary, or publications containing biographies of Anne Frank, Nazi persecution of Jews and related material had been torn at many public libraries in Japan.

Police on Friday did not supply a motive for the crime, or identify the suspect, whom they said has admitted to the vandalism.

Japanese authorities often refrain from naming a suspect when there are questions over the individual's mental competence.

"The suspect is a 36-year-old unemployed man who lives in Tokyo," the Tokyo metropolitan police department said in a statement.

It added that the investigation was still ongoing to find a motive for the crime and to confirm if the suspect was responsible for damaging other copies.

"The suspect allegedly got into libraries in Suginami Ward on February 5, 2014, and ripped pages off 23 books by Anne Frank," police said.

Suginami ward alone found at least 121 damaged books at 11 of its 13 public libraries, according to the local office.

In response, the Israeli embassy in Japan has also donated 300 copies of the diary to Tokyo libraries.

The Anne Frank House, a museum dedicated to the German Jew born in Frankfurt in 1929 and who later died in a Nazi concentration camp, also donated 3,400 copies of its catalogue to Japanese libraries.

Anne Frank's diary documented her family's experiences hiding in concealed rooms during the German occupation of the Netherlands where they settled in 1933.

They were caught and sent to Nazi concentration camps. Anne and her sister died of typhus in 1945.

Frank's "The Diary of a Young Girl" was added to the UN Education, Scientific and Cultural Organisation's Memory of the World Register in 2009.