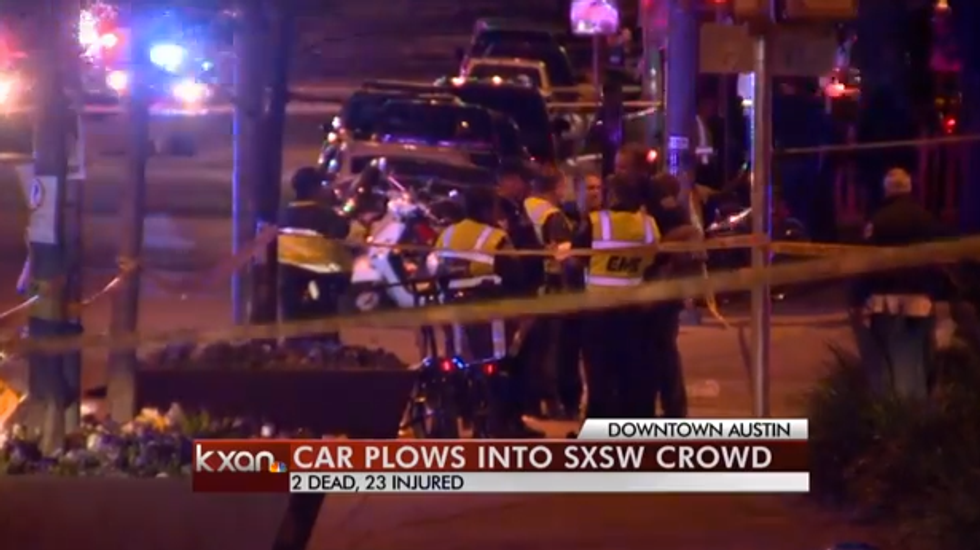 Two people were killed and 23 injured when a car plowed into a crowd of people early on Thursday morning near the South by Southwest Interactive (SXSW) music and film festival in Austin, Texas, and a suspect was arrested, police said.

Five of the 23 injured were in critical condition after the crash near The Mohawk bar, the Austin Police Department said in a statement. Police said one individual was in custody.

"A vehicle crashed through some of our temporary South by Southwest barricades and continued driving and hit multiple pedestrians," said Austin Police Department spokesman Brian Moon.

The injured were taken to area hospitals, he said.

SXSW, which began as a music event in 1987, is a collection of interactive, film, and music festivals and conferences that draws tens of thousands of people to the Texas capital annually.

Police initially tried to pull the suspect over at a gas station on a road running off Interstate 35, police spokesman Jermaine Kilgore said.

But he evaded police and drove the wrong direction down a one-way street before barreling through the barricade and hitting pedestrians, many of whom were milling about in the street closed to car traffic, and other vehicles, Kilgore said.

The driver hit a man and a woman on a moped, killing them, and also struck a taxi and a parked van before stopping his vehicle and fleeing on foot, Kilgore said.

A police officer giving chase used a Taser to subdue the suspect, who was suspected of intoxicated driving, Kilgore said.