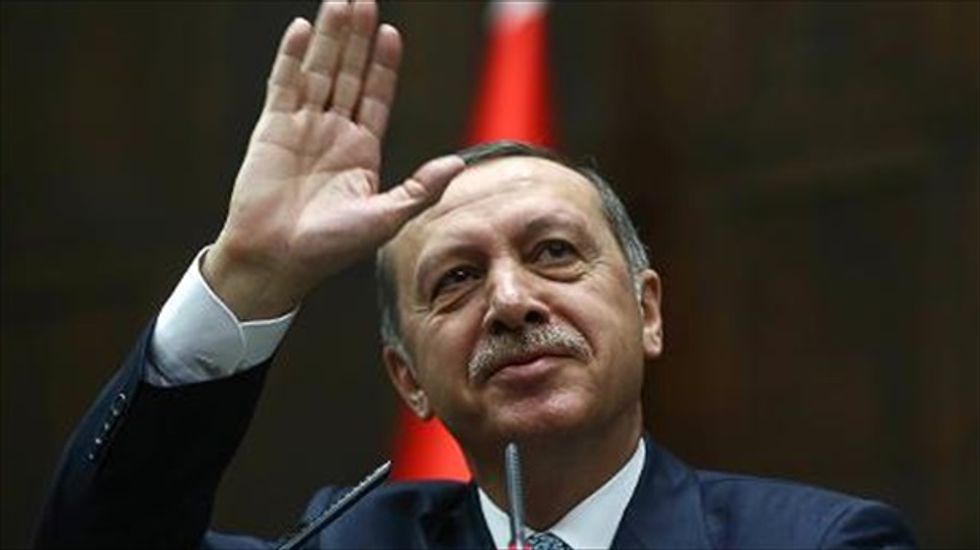 Turkey's Prime Minister Recep Tayyip Erdogan waves to members of his ruling AK Party (AKP) during a session at the Turkish parliament in Ankara on Feb. 25, 2014 [AFP]

Turkey's embattled prime minister has warned that his government could ban social media networks YouTube and Facebook after a raft of online leaks added momentum to a spiralling corruption scandal.

Recep Tayyip Erdogan has already tightened his government's grip over the Internet, generating criticism at home and abroad about rights in the EU-hopeful country.

"There are new steps we will take in that sphere after March 30... including a ban (on YouTube, Facebook)," Erdogan told private ATV television in an interview late Thursday.

Erdogan's ruling Justice and Development Party (AKP) has come under mounting pressure since last week, when audio recordings were leaked in which Erdogan and his son allegedly discuss how to hide vast sums of money.

The Turkish premier dismissed them as a "vile" and "immoral" montage by rivals ahead of key local elections on March 30.

A series of other online leaks showed Erdogan meddling in trade deals and court cases.

Erdogan's government has been shaken by a high-level corruption scandal that erupted in mid-December and ensnared the premier's key political and business allies.

Erdogan has accused loyalists of ally-turned-opponent Fethullah Gulen, an influential Muslim cleric based in the United States, of orchestrating the graft probe.

The Turkish strongman has responded by purging police and passing laws to increase his grip over the Internet and the judiciary.