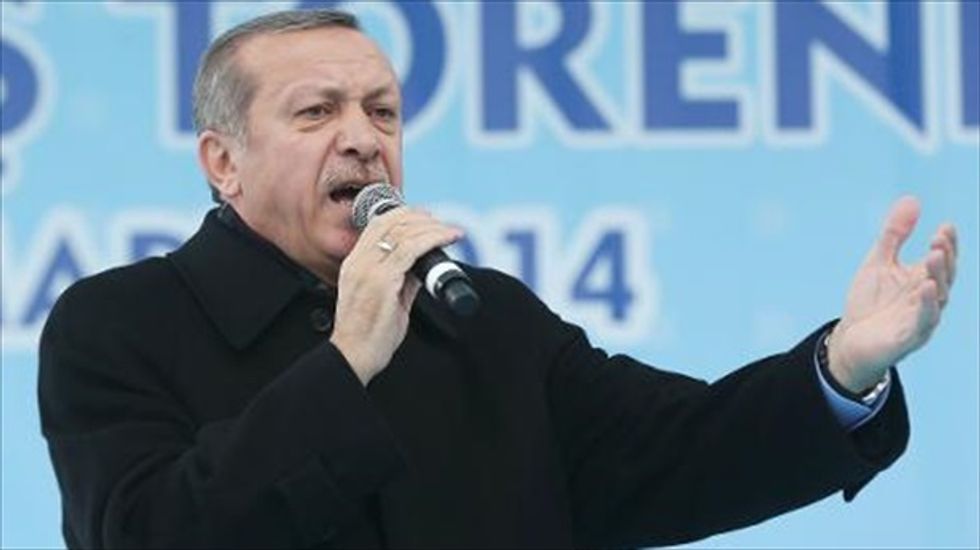 Turkey's combative prime minister warned on Thursday that he would eradicate Twitter in the wake of damaging allegations of corruption in his inner circle that have spread across social networks in recent weeks.

"We will wipe out Twitter. I don't care what the international community says," premier Recep Tayyip Erdogan said at an election rally in the western province of Bursa.

"They will see the Turkish republic's strength," he added.

The Internet Publishers Association, a body representing online and media companies, said the move was an attempt to "destroy freedom of expression".

"The prime minister having the power to shut down Twitter will be the confirmation of dictatorship," it said in a statement published by local media on Thursday.

Turkey, which has more than 10 million Twitter users, has seen access to thousands of sites blocked in recent years.

YouTube was banned for two years up to 2010 because of material deemed insulting to the country's revered founder, Mustafa Kemal Ataturk.

Erdogan, Turkey's all-powerful leader since 2003, has been under mounting pressure since audio recordings spread across social media that appeared to put him at the heart of a major corruption investigation.

Recordings include an apparent discussion between Erdogan and his son about hiding money, as well as others in which he appears to be interfering in business deals, court cases and media coverage.

Some of the most damaging information has come from a Twitter account under the name Haramzadeler ("Sons of Thieves"), which appears to have access to a huge trove of secret documents and police wiretaps linked to the investigation.

Erdogan has dismissed most of the recordings as "vile" fakes concocted by his rivals, and threatened to ban YouTube and Facebook after crucial local elections on March 30.

"This has nothing to do with freedoms. Freedom does not mean the right to intrude on someone's privacy, or to pass the state's secrets to the international arena," Erdogan said on Thursday.

Erdogan's government has been rocked by a vast corruption probe launched in December which saw dozens of people rounded up, including close business and political allies of the prime minister.

The Turkish strongman has accused associates of a former staunch ally -- US-exiled cleric Fethullah Gulen -- of being behind the graft probe that claimed the scalps of four ministers.

Gulen has denied any involvement.

Turkey recently tightened government control of the Internet and the judiciary, generating criticism from rights groups.