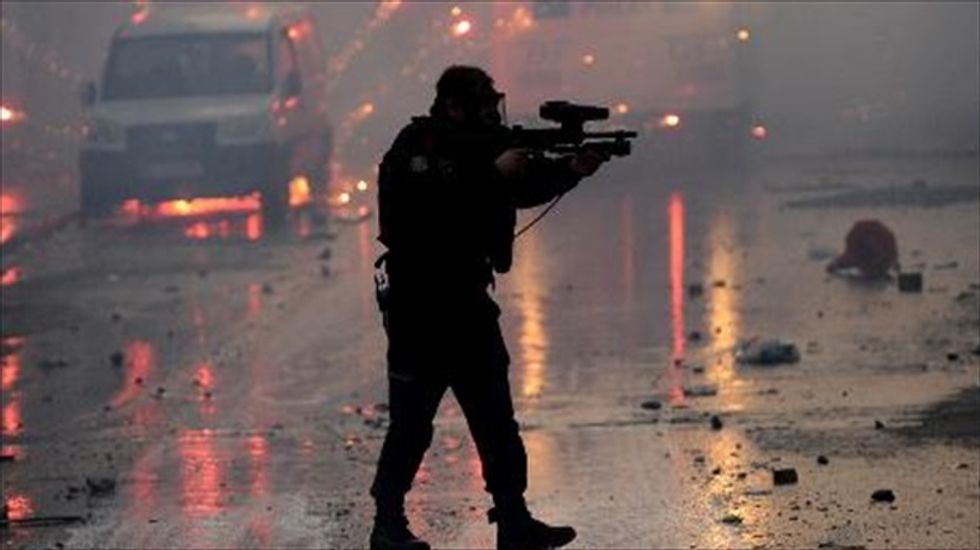 A policeman fires rubber bullets at protesters during clashes with riot police at the funeral of Berkin Elvan on March 12, 2014 in Istanbul [AFP]

Riot police fired tear gas and water cannon at protesters in Ankara and Istanbul on Wednesday as tens of thousands took to the streets to mourn a teenage boy who died from injuries suffered in last year's anti-government protests.

In the Turkish capital, police clashed with demonstrators as they tried to stop traffic, making a number of arrests and leaving several injured.

In Istanbul, large crowds shouting anti-government slogans lit a huge fire as they made their way to a cemetery for the burial of 15-year-old Berkin Elvan.

Scuffles broke out when police tried to prevent a group of protesters from gathering on the city's Taksim Square, the epicentre of last June's mass protests.

In the western city of Izmir, one woman was left with a broken leg and several others were hospitalised after police tried to stop crowds marching towards local government buildings, news channel NTV reported.

Elvan, who died in an Istanbul hospital on Tuesday after 269 days in a coma, was hit on the head by a tear gas canister while going to buy bread during the protests against Prime Minister Recep Tayyip Erdogan that gripped Turkey in June.

"The rage of mothers will suffocate the killers," screamed others as they marched through the streets after Elvan's funeral.

The renewed unrest, following clashes in at least 32 cities on Tuesday, adds to mounting pressure on Erdogan, whose government has been rocked by a corruption scandal ahead of elections that could decide his fate.

Elvan's story became a symbol for many Turks of the heavy-handed police tactics against mass anti-government demonstrators in June, a major challenge to Erdogan's 11-year-rule.

On the election trail Wednesday, Erdogan downplayed the fresh wave of protests.

"A government can only be changed at ballot box," he said at a rally in the southeastern Mardin province.

The prime minister has vowed to step down if the AKP, in power since 2002, loses local elections on March 30 that are seen as a key test of his popularity after last year's unrest and an ongoing graft probe that has ensnared key AKP allies.

"How many young people have to die for Erdogan to resign? My only wish is for this fascism to end without spilling more blood," said retired worker Atilla Izmirlioglu.

Government spokesman Bulent Arinc said Turkey had been in mourning since Elvan's death.

"It is very sad that a child has died in an incident that occurred on the street," he said.

The protests of June last year started as a relatively small environmentalist movement to save Istanbul's Gezi Park but evolved into a nationwide wave of protests against Erdogan, seen as increasingly authoritarian.

An estimated 2.5 million people took to the streets across Turkey over three weeks in June. More than 8,000 people were injured and eight killed, according to medics.

The boy's mother, Gulsum Elvan, has lashed out at Erdogan, who at the time praised police "heroism".

"It's not God who took my son away but Prime Minister Erdogan," the tearful mother told reporters on Tuesday.

"Erdogan's police killed this guy. He should be ashamed but he didn't even send his condolences to the family," said a student who gave her name as Ayse.

"Enough is enough, we are fed up with this government of murderers," she told AFP.

President Abdullah Gul expressed his sadness Tuesday at the boy's death and appealed for calm, urging everyone "to do everything to prevent this from happening again".

"Their children steal millions and our children are killed when they go to buy bread," said the Disk union.

The union was referring to the sons of three government ministers who were arrested in December as part of a high-level investigation into bribery and corruption allegations.

The premier himself has been implicated in the scandal, with leaked recordings surfacing online in which he purportedly can be heard talking to his son about hiding millions of euros in cash. Erdogan has dismissed the recordings as being fabricated by opponents.

In the wake of the corruption controversy, the AKP-dominated parliament passed new legislation tightening state control over the Internet and the judiciary, attracting widespread criticism and raising questions about the state of democracy in Turkey.

On Wednesday, the European Parliament warned that the new laws could hinder Turkey's bid to enter the bloc.

The measures "derail Turkey's progress towards achieving the criteria" for EU accession, the lawmakers said in a resolution.