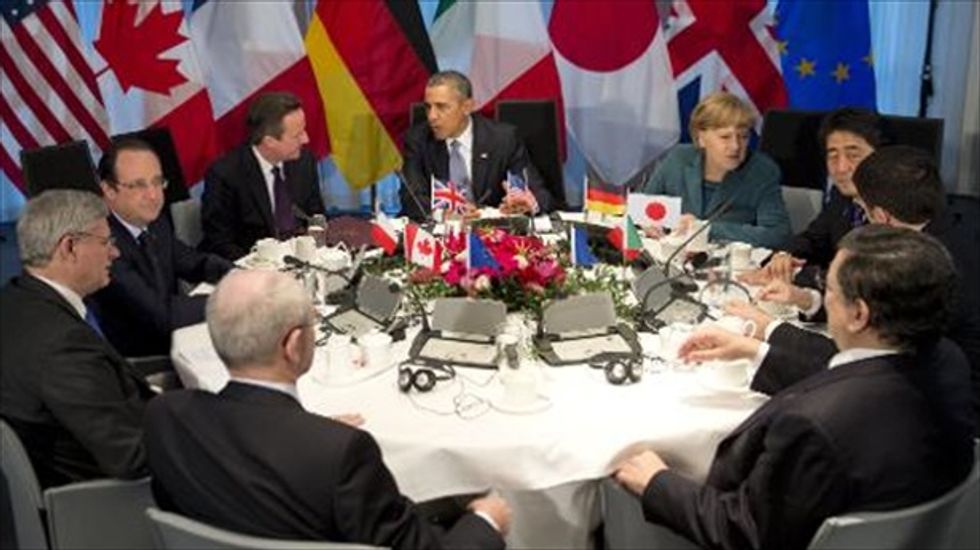 G7 leaders meet at the official residence of the Dutch prime minister in The Hague on March 24, 2014 [AFP]

The G7 group of top economic powers on Monday scrapped a planned meeting to be hosted by Russia as they sought to deepen Moscow's isolation over the Ukraine crisis.

After emergency talks called by U.S. President Barack Obama, the G7 said they would hold a meeting in Brussels without Russia instead of the wider G8 summit that was to have taken place in Sochi.

The G7 also threatened tougher sanctions against Russia for its annexation of Crimea, which has plunged relations between the West and Moscow to their lowest point since the end of the Cold War.

The meeting in The Hague came as Ukraine ordered its outnumbered troops to withdraw from Crimea as yet another of its bases was stormed and the White House said it was "very concerned" by the Russian troop build-up on the border.

"We remain ready to intensify actions including coordinated sectoral sanctions that will have an increasingly significant impact on the Russian economy, if Russia continues to escalate this situation," the leaders said in a statement.

The G7 "came together because of shared beliefs and shared responsibilities. Russia's actions in recent weeks are not consistent with them. Under these circumstances, we will not participate in the planned Sochi summit," they added.

But Russian Foreign Minister Sergei Lavrov defiantly dismissed such a move as "no great tragedy" after separate talks with US Secretary of State John Kerry and Ukraine's interim Foreign Minister Andriy Deshchytsya.

"If our Western partners think that this format (the G8) has outlived itself, then so be it," Lavrov told reporters.

"We are not trying to hold on to this format, and we see no great tragedy if it does not meet," Lavrov said, insisting that Crimea has "a right to self-determination".

Russia's takeover of the region was not "malicious intent", said Lavrov, but was to "protect the Russians who have been living there for hundreds of years".

Moscow was added to the G7 club of the US, Japan, Germany, Italy, France, Canada and Britain -- seen as the world's top diplomatic and economic table -- in 1999 as a reward for choosing the path of democracy after the collapse of Communism.

French Foreign Minister Laurent Fabius said the snubbing of Russia was "perhaps the most significant action because it shows that all these different countries have not accepted the annexation of Crimea as a fait accompli".

Fabius stressed that the G7 had agreed to work out how to reduce their energy dependency on Russia.

"Because when we talk about sanctions, possible reactions, energy questions must be asked," Fabius said.

"We must be in a situation where we don't depend as much as we do today on Russia," he said.

Kerry met with Lavrov for more than an hour earlier in the day, his spokeswoman Marie Harf said, welcoming the Russia-Ukraine talks, the highest-level contact between the neighbours since the start of the crisis.

Kerry reminded Lavrov that Obama has signed an executive order "that provides the flexibility to sanction specific industries if Russia continues to take escalatory steps," Harf said, urging Russia to de-escalate the situation and pursue a dialogue with the Ukrainian government.

In Crimea, Russian forces stormed a Ukrainian navy ship, with an AFP correspondent reporting plumes of smoke as a Ukrainian defence spokesman said the crew had fired smoke grenades in self-defence.

"The position of the Ukrainian government is to use all peaceful means, all diplomatic and economic means to resolve this conflict peacefully," he told reporters.

"However, we don't know what are the Russian plans. What the plans of President (Vladimir) Putin (are). That's why we ask for meetings with the Russians," he said before his talks with Lavrov.

The diplomatic efforts came as Ukrainian authorities pulled out all servicemen and their families to the mainland.

In a televised address to the nation, Ukraine's acting president Oleksandr Turchynov said a decision had been taken "to conduct a redeployment of military units stationed in the Autonomous Republic of Crimea".

Turchynov's announcement came less than a month after Putin won authorisation to use force in response to the February 22 ouster of pro-Kremlin president Viktor Yanukovych's regime by more nationalist leaders who are seeking a closer alliance with Europe.

Ukraine's increasingly demoralised forces had been steadily losing ground on the Black Sea peninsula and saw their main airbase outside the regional capital Simferopol stormed on Saturday.

A top NATO commander had warned that the Western military alliance was carefully watching massive Russian troop formations that could theoretically make a push across the vast ex-Soviet country at any point.

Moscow has denied any such plans despite Putin's open ambition to resurrect vestiges of the Soviet empire and stamp his authority over eastern European nations that sought protection from the West following the 1989 fall of the Berlin Wall.