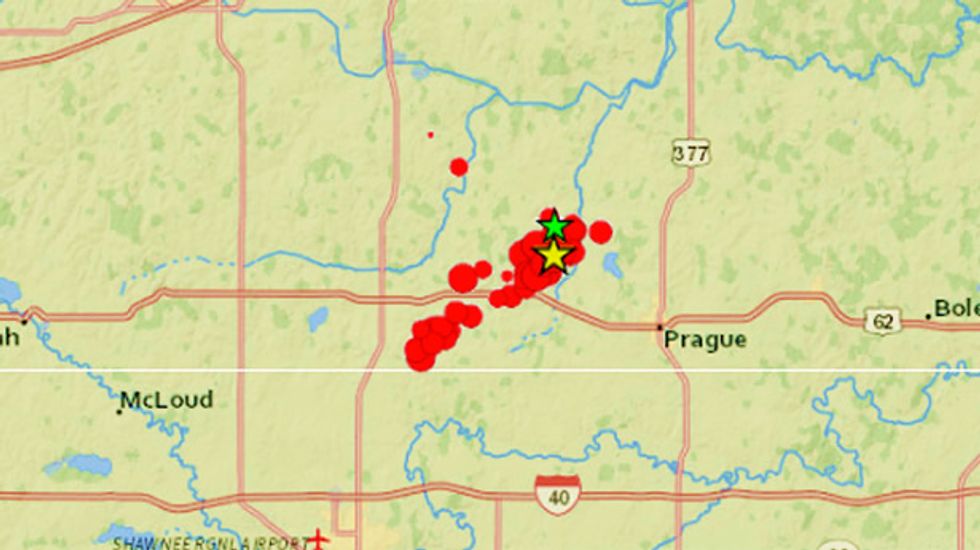 Injection wells are considered by some to be the most environmentally sound method of disposing of waste-water -- which is a byproduct of both hydrofracking and conventional oil production -- because they use the earth itself to both filter and contain the pollution.

The decade-long explosion of energy-producing facilities in the central United States has, according to a recent article in the journal Geology, led to an 11-fold increase in the number of earthquakes occurring in areas that are typically tectonically calm, including Arkansas, Texas, Ohio, and Colorado in the past four years alone.

The 5.7 magnitude quake in Prague followed an injection of waste-water approximately 650 feet away from the Wilzetta fault zone, a complex fault system about 124 miles in length. All three earthquakes exhibited a slip-strike motion, and did so at three different locations, indicating that three separate areas of the fault zone were activated.

Researchers believe that the increased pressure required to inject the water into areas previously occupied by oil caused the fault to "jump." Heather Savage, a geophysicist at Columbia University’s Lamont-Doherty Earth Observatory, said that "when you overpressure the fault, you reduce the stress that’s pinning the fault into place and that’s when earthquakes happen."

Geoffrey Abers, also a seismologist at Lamont-Doherty, agreed, saying that "[t]here’s something important about getting unexpectedly large earthquakes out of small systems that we have discovered here. The risk of humans inducing large earthquakes from even small injection activities is probably higher."

Despite this risk, authorities in Oklahoma continue to allow waste-water injection near the Wilzetta fault.

[Map of Prague earthquake and aftershocks via USGS]