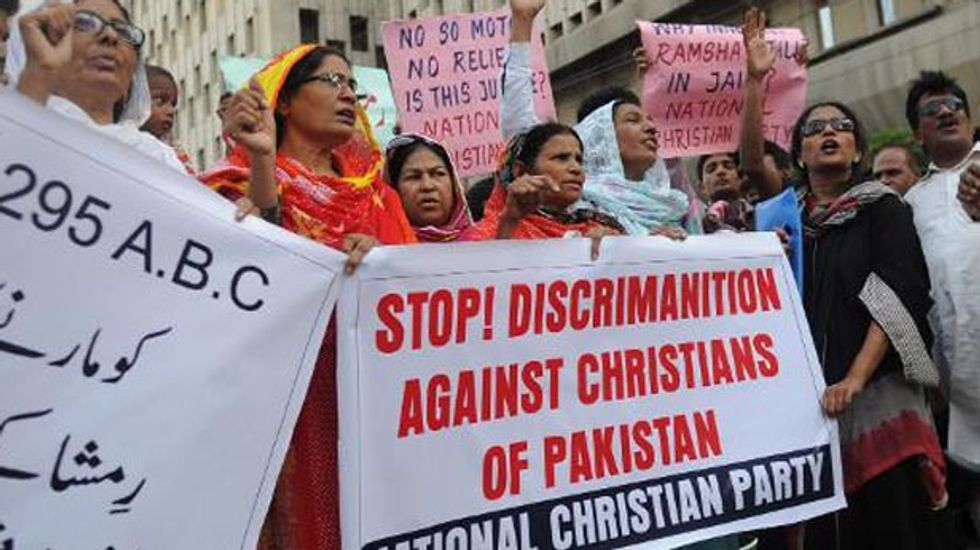 Governments around the world are increasingly invoking blasphemy laws, with Pakistan by far the country that jails the most citizens for allegedly attacking religion, a US report said Thursday.

The US Commission on International Religious Freedom, a government advisory panel, voiced fear that the rise in laws banning blasphemy was leading to punishment of people who merely express different religious views or who have been falsely accused.

The report found Pakistan used its controversial law at a level "incomparable" to anywhere else, listing 14 people on death row and 19 others serving life sentences for alleged blasphemy against Islam.

Pakistan has never carried out the death penalty for blasphemy, but the report charged that the law -- and the lack of procedural safeguards -- has contributed to an alarming number of mob attacks and vigilante violence against minorities.

Egypt has seen a rise in use of such laws since the 2011 overthrow of president Hosni Mubarak, the report said. Citing local activists, the report found blasphemy cases involved 63 people in 2011 and 2012 and disproportionately targeted the Christian minority.

The US commission opposes blasphemy laws, saying they "protect beliefs over individuals."

"This trend of greater usage of blasphemy laws will surely lead to increased violations of the freedoms of religion and expression," said Knox Thames, the commission's director of policy and research.

"Governments will jail people, and extremists may kill others in the defense of undefined notions of religious sentiment," he said, calling blasphemy laws "inherently problematic."

Blasphemy is a sensitive issue for many Muslims, whose religion forbids images of the Prophet Mohammed. Violent protests erupted in the Islamic world after Danish cartoons and later a low-budget film depicted Mohammed.

Pakistan in the past has urged the United Nations to make blasphemy an internationally recognized offense, arguing that insults against Mohammed are intolerable.

The commission report also highlighted Bangladesh's arrests of three self-professed atheists last year and said Indonesia has arrested more than 120 people since 2003 for blasphemy, although they generally have not been prosecuted.

While blasphemy cases took place mostly in the Islamic world, the commission noted that Russia last year enacted a blasphemy law after punk band Pussy Riot put on a performance critical of President Vladimir Putin inside a cathedral.

The report also pointed to Greece, where a man was arrested in 2012 for blasphemy after mocking a late Orthodox monk on Facebook.