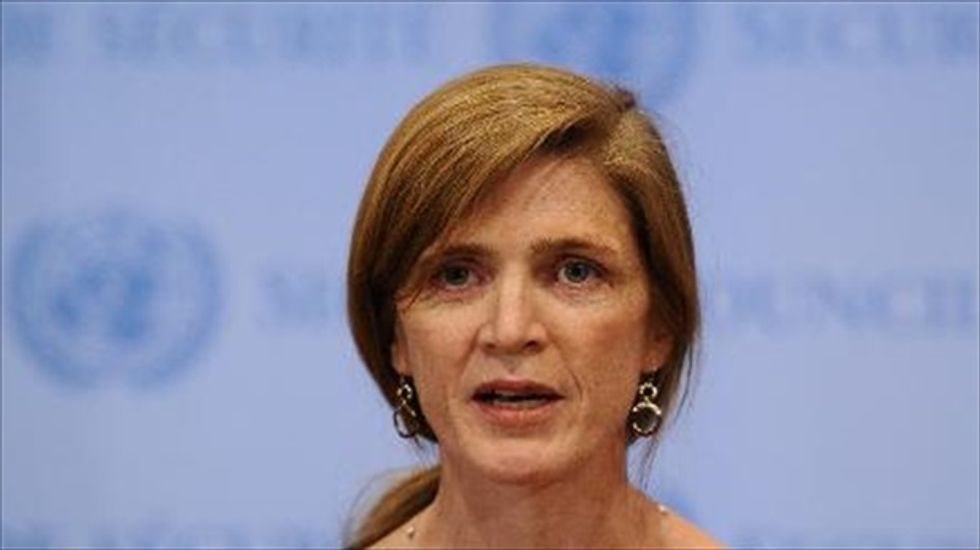 Samantha Power, US Ambassador to the United Nations speaks to the media after a closed-door session of the Security Council on March 6, 2014 at UN headquarters [AFP]

The United States urged Moscow on Thursday to help international observers enter Crimea, as it joined allies in denouncing the semi-autonomous peninsula's planned referendum to separate from Ukraine.

In a fourth emergency session on the Ukraine crisis in less than a week, the United Nations Security Council was once again clearly divided, with Western powers denouncing the Crimean parliament's "illegal" decision to put the question of secession from Ukraine to a referendum on March 16.

"We call on Russia to allow UN and OSCE (Organization for Security and Co-operation in Europe) monitors... into all of Ukraine, including Crimea, to ensure the rights of all Ukrainians are being respected, including ethnic Russians," US.. envoy Samantha Power told reporters.

Russia should "call on the Crimean authorities and use their own authority to ensure the safety and access for the international monitors," she said after the council's two-hour closed-door meeting.

Gunmen earlier prevented a team of 40 military observers from 21 of the OSCE's 57 members from entering Crimea, which has been controled by Russian forces since February 28.

Amid escalating tensions over the ex-Soviet state, Power said "the proposed referendum would violate the Ukrainian constitution."

"The referendum is illegitimate and illegal," she added. "We will not recognize the results of a referendum of this nature."

Europe's worst security crisis in the post-Cold War era escalated when lawmakers on the predominantly Russian-speaking Black Sea peninsula of two million set a referendum on switching to Kremlin rule.

The rugged region has been home to tsarist navies since the 18th century and was annexed to Ukraine in Soviet times as a "gift" in 1954.

British Ambassador to the U.N., Mark Lyall Grant, agreed with Power that the referendum was illegitimate.

"It is entirely illegal under the Ukrainian constitution, this position was made clear by a large number of member states," he said.

Lyall Grant said the Security Council was unlikely to agree on a resolution in the coming days, though the group would meet again soon.

Russia can block any council statement because of the veto power it wields thanks to its permanent member status.

While stressing Moscow was only an "observer" in the council's debate, Russian envoy Vitaly Churkin said his country will make its position known.

He rejected suggestions that the gunmen who threatened UN special envoy Robert Serry on Wednesday, forcing him to cut his Crimea visit short, were Russian.

Instead, Churkin ridiculed the gunmen as a "ragtag group of people."

"They do not seem like Russian soldiers on the basis of that description," he added.

Ambassadors spoke about the incident during the council's meeting and heard a report about Serry's mission in a videoconference by UN Deputy Secretary-General Jan Eliasson, who is currently in Kiev.

Eliasson is due to leave the region soon along with Serry, while Assistant Secretary-General for Human Rights Ivan Simonovic arrived late Thursday in the Ukrainian capital.