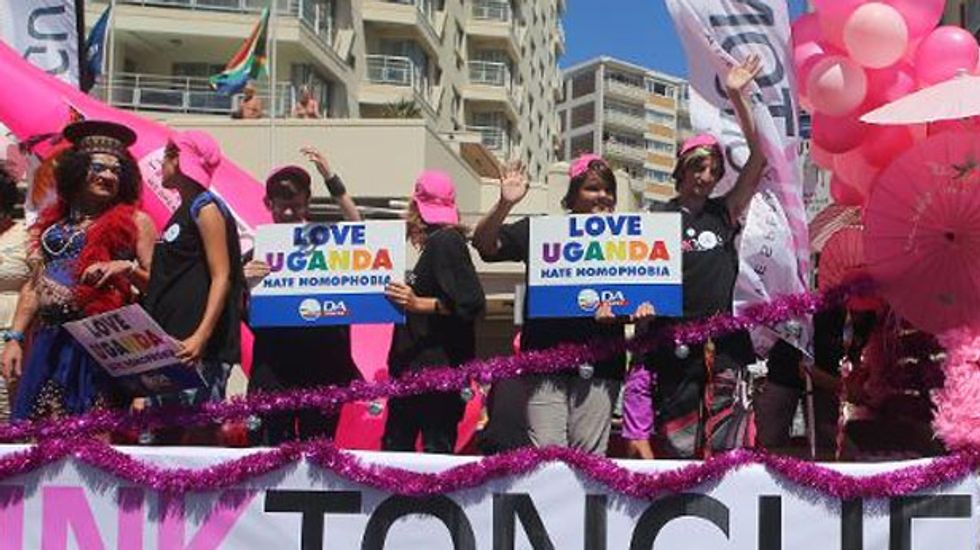 Ugandan gay rights activists and politicians filed a challenge in court Tuesday to a tough new anti-gay law that has sparked international outrage and led to cuts in foreign aid.

"I believe it (the law) to be harmful, redundant, unnecessary, and inconsistent with the constitution," said Fox Odoi, an MP and one of the nine petitioners who submitted their appeal at Uganda's constitutional court.

Ugandan President Yoweri Museveni last month signed a bill which holds that "repeat homosexuals" should be jailed for life, outlaws any promotion of homosexuality and requires people to report on homosexuals.

The adoption of the bill was largely a popular move in conservative Uganda, where Museveni -- a devout Christian who has been in power for 28 years -- looks set to be re-elected in 2016.

But the petitioners argue the law violates the constitutional right to privacy and dignity, as well as the right to be free from discrimination, and cruel, inhuman and degrading treatment.

"This act not only represents an effort by the executive and parliament to scapegoat an unpopular minority for political gain, but we believe it also violates the highest law of our country," said Andrew Mwenda, a journalist and one of the petitioners.

The activists are led by Civil Society Coalition on Human Rights and Constitutional Law which includes 50 Ugandan groups.

The group said in a statement there had been several cases of "violence and retaliation" against people known or suspected to be gay since the law was signed.

The coalition said it had documented 10 cases of arrests of people who are gay or suspected to be gay since the law was passed, and at least three cases of landlords evicting tenants.

The petition also requested a permanent injunction against media outlets that identify gay or suspected gay people, after newspapers listed people accused of being homosexual.

"It is motivated purely by hate and by a drive to reap commercial gain," said Jacqueline Kasha Nabagesera, another petitioner, who was herself named in the Red Pepper tabloid.

In 2011, prominent Ugandan gay rights campaigner David Kato was bludgeoned to death at his home after another newspaper splashed photos, names and addresses of gays in Uganda on its front page along with a banner headline reading "Hang Them".

The court could take up to six months to hear the petition, Odoi added, noting that while constitutional petitions take priority over other cases, several are already waiting to be heard.

Several nations have stopped development aid to Uganda following the new law, including Denmark, Norway, the Netherlands and Sweden.

The World Bank has also stalled a $90-million loan, which was intended to help Uganda strengthen its health-care system.

Opposition leader Kizza Besigye has accused the government of using the issue of homosexuality to divert attention from domestic problems such as corruption scandals or Kampala's military backing of South Sudan's government against rebel forces.

But homophobia is widespread in Uganda, where American-style evangelical Christianity is on the rise.